Entering Week 5 of the Green Bay Packers season, there isn’t much to be lodged in the way of complaints. The team is off to a 4-0 start. Aaron Rodgers remains the best quarterback in the universe. The oft-difficult likes of the Seahawks and 49ers have both been vanquished. Even the “Fire Dom Capers” crowd has quieted a bit. With the 2-2 Rams coming to Lambeau Field, the good times in Green Bay seem likely to continue rolling this weekend. Beyond just admitting that the Packers have played really, really well through a fourth of the season, there’s not much actual analysis to be done.

Instead, let’s focus on how Packers linebacker Jake Ryan has the same name as the heartthrob from the movie Sixteen Candles. It’s true! The rookie reserve has the very same nomenclature as Molly Ringwald’s lip-biting love interest in John Hughes’ classic 1984 film. What are the odds of that? “Very high,” you say? “Ryan is a very common last name,” you continue? Whatever. Instead of manufacturing a list of issues the surging Packers franchise needs to address, let’s dive into the real issue at hand. After re-watching the beloved romantic comedy and reading up on the 4th round pick, Milwaukee Record can provide a definitive answer to the troubling and incredibly stupid dilemma of which is the better Jake Ryan.

Jake Ryan — Sixteen Candles
We quickly learn this Ryan comes from a wealthy Chicagoland family. Not only does he, a high school student, drive a Porsche, his parents also own a Rolls-Royce. His house is incredible or, more accurately was incredible before Ryan’s girlfriend Caroline invited the whole school over to party there and destroy the place. Caroline drunkenly alleges that Jake’s parents are constantly gone, allowing them to play house there frequently.

Jake Ryan — Packers
We can’t allege anything about this Ryan family’s wealth, but there are enough family pictures on Jake’s Twitter page to suggest they’re at least there to support him emotionally. They seem to be a normal Midwestern family from Ohio. Then again, they probably don’t own a Rolls-Royce. His brothers currently play Division 1 college football. His dad was a wide receiver at Wake Forest in the early ’80s, too, so he hails from an athletic bloodline.

Jake Ryan — Sixteen Candles
Moments into Sixteen Candles, we’re told Ryan is a senior. The idea of college is never mentioned, but his eventually semi-stalking of a sophomore with the hope of dating her long-term seems to be an indication he’s either planning to continue his studies locally or just skip college altogether.

Jake Ryan — Packers
Before being drafted by the Pack, this Jake Ryan earned his bachelor’s degree from the University of Michigan, which is a respected institution. Still, his degree was in sociology, so this football career better pan out for him. No matter what his major was, graduating from Michigan is nothing to sneeze at. Also, in regard to applying his education in his career, Ryan has been called a “film-eater” who watches a ton of tape to help him prepare for games.

Jake Ryan — Sixteen Candles
Given that the entirety of Sixteen Candles chronicles just two days, there aren’t enough wardrobe changes to get a clear indication of this Jake Ryan’s style. The plaid button up shirt he wears in the majority of the film is a clean and classic look that could (and is) still worn by people today, more than 30 years later. The same can’t be said for his sweater vest/collared button-up hybrid he rocks—tucked in, of course—with faded blue jeans at movie’s end. Actually, he wears two sweater vests over the course of a 93-minute film, which might be a cinematic record of some sort. Sometimes he (pictured right) looks like a young version of an old man. 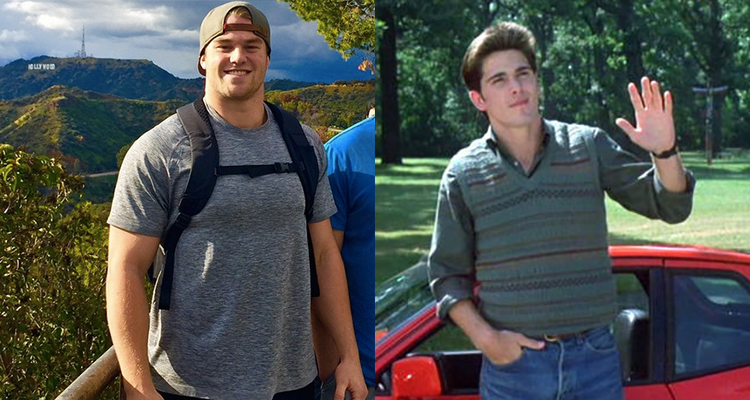 Jake Ryan — Packers
Aside form his work uniform, for which his employer has established a clear set of rules that prohibit personal customization, this Jake Ryan seems to dress for comfort over all else. He’s prone to donning baggy t-shirts, gym shorts, and a backwards cap. Sometimes he looks like a big version of a little kid.

Jake Ryan — Sixteen Candles
Perhaps some things have changed in society, but this PG-rated movie makes us wonder what was considered to be ethical and moral in the 1980s. At times, we’re made to think Samantha’s (Ringwald’s) crush is a sensitive, well-mannered gentleman who just wants to find “somebody [he] can love who will love [him] back.” Then moments later, he’s pawning off the right to bring his girlfriend—who is “so blitzed, she won’t know the difference”—home to a freshman (who, spoiler alert, proceeds to implicitly have sex with her in her intoxicated state in a church parking lot) in exchange for a pair of used panties belonging to a 16-year-old girl he isn’t dating. As admirable as his phone etiquette might be, that’s some pretty creepy and horrible shit.

Jake Ryan — Packers
By all accounts, the 4th round selection seems like a pretty good dude. He was a team captain at Michigan who was known for his leadership ability. He visits sick children at hospitals, and in college he earned the Pat Tillman Award, which is “presented to the player who best exemplifies intelligence, sportsmanship and service.” All that, and absolutely NO recorded footage of him boasting that he could “violate” his “blitzed” girlfriend “10 different ways if he wanted to.” This guy is the total package! His official Packers bio says he’s single, ladies.

Jake Ryan — Sixteen Candles
Who knows for sure? He did a few pull ups in gym class and he seemed pretty confident that he could beat up a scrawny freshman if he was forced to.

Jake Ryan — Packers
Don’t let the scale of the hastily made Photoshop above fool you: the Packers’ Jake Ryan is a beast. He’s 6’2” and 240 pounds, and he ran the 40-yard dash at the combine in 4.65 seconds. He’s a two-time All-American linebacker. Scouts have said his “productivity comes from toughness.”

It was close, but we can say with certainty that the Green Bay Packers’ Jake Ryan is the best Jake Ryan. He’s a hard worker, seemingly a stand-up guy…plus, unlike the other Jake Ryan, he didn’t essentially trade away his blind-drunk girlfriend to a boy he’d met that afternoon in exchange for a pair of used underwear.