When we last talked to world-by-way-of-Milwaukee rapper Juiceboxxx, the 28-year-old musician/entrepreneur was opening up about his childhood, grappling with being the quasi-subject of a new book, and nursing a nasty head wound suffered two nights before at a show in Cleveland. Unfortunately, the conversation didn’t veer into whether he was slated to make an appearance on the season 5 premiere of HBO’s Girls—which, if the Internet is to believed, is totally a thing that’s going to happen.

Last week, the purported first pages of Girls’ upcoming season premiere script (allegedly titled “Too Much Juice”) were “leaked” to Reddit. In them, it’s revealed that not only is Marnie (Allison Williams) attending a Juiceboxxx show with an annoyed Hannah (series creator Lena Dunham), she’s in fact dating the tireless Mequon native. “Hannah! I didn’t judge you when you were with Adam, who, by the way, liked to hit people! So don’t judge me,” Marnie says soon after confessing she and Juice skipped a “SexFlix” party in favor of attending a “Lilith Fair-themed rave” until 6 a.m. “Any ways, Juiceboxxx is actually really intelligent and he understands me in ways Dezi didn’t at all.” 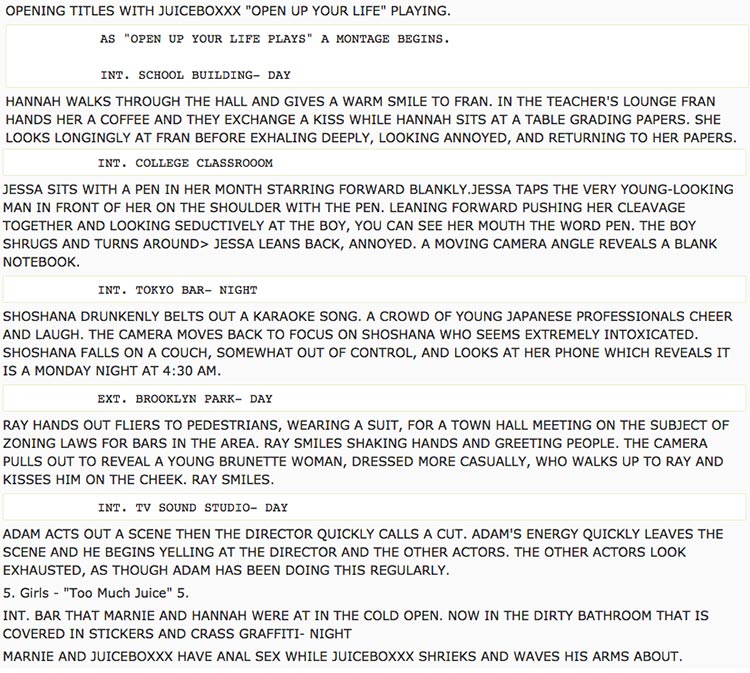 Juiceboxxx declined to comment when asked about his alleged Girls appearance, so we’ll let his one (again, alleged) scripted line, “”I DON’T GIVE A SHIT ABOUT ANYTHING EXCEPT MAKING EVERYONE HERE TONIGHT GO INSANE. THIS IS NOT A GAME!!!” speak for itself. Real leaked script or not, Girls Season 5 debuts on HBO January 11, 2016.