In news that’s sure to make some of you sad and more of you say, “Oh yeah, I remember Warped Tour,” various sources are reporting that 2018 will be the last full iteration of the Vans Warped Tour. Founded by Kevin Lyman in 1995, the “largest traveling music tour in the United States” has been a frequent Milwaukee visitor during the roving festival’s 23-year run—with most shows taking place at the Henry Maier Festival Park and at least one installment occurring at The Rave.

Lyman tells Billboard, “today, with many mixed feelings, I am here to announce that next year will be the final, full cross-country run of the Vans Warped Tour.”

Though the founder and producer says Vans Warped Tour isn’t completely going anywhere and he claims there are plans in place for the fest’s 25th anniversary in 2019, the days of touring the country are over, which all but guarantees 2018 will be its final stop in Milwaukee.

Once a juggernaut that brought out some of the biggest and best punk, pop-punk, and ska had to offer, Vans Warped Tour is not what it was 23 (or even 15) years ago. Recently, it’s made the stark transition to a metalcore, fringe hip-hop, and dynasty act festival that seems to be tailored to the tastes of 14-year-old cousins more than those of ardent punk listeners.

Though its virtually unrecognizable compared to what it was at its outset, the end of Vans Warped Tour as we know it will undoubtedly leave Milwaukee with a hole in its summer festival lineup that will require dozens of weird band names, a craft brewery-sponsored Hawthorne Heights pop-up acoustic set, and at least one inexplicable Riff Raff booking to replace. So as you process this tragic news, pour out a can of Monster Energy Khaos for the Vans Warped Tour, remember the good times, and save the date for the event’s July 23 stop in Milwaukee. Peace out, Warped Tour. You’ll be missed. Thanks for all the memories…and free Maltesers™ samples. 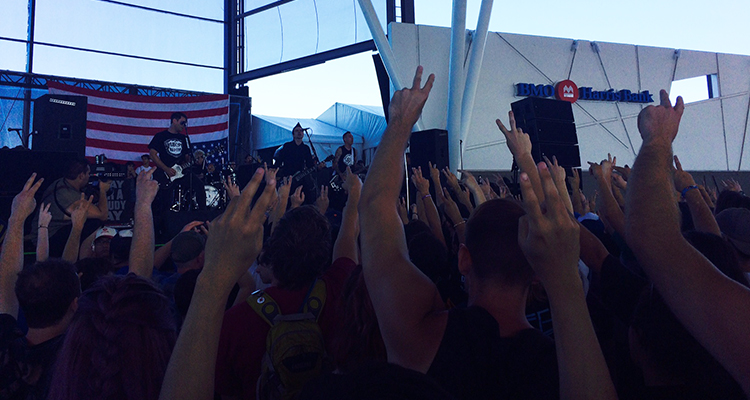