Though Saebra & Carlyle only started playing out in September, the duo’s roots extend more than 10 years, all the way back to when the project’s namesakes worked together at a shopping mall coffee chain. There, singer Saebra Laken and guitarist Carlyle Nowak decided they wanted to start a band together. It took more than a decade to happen, but the longtime friends have finally made good on their plan, and they’re trying to make up for lost time with frequent shows and aspirations to branch out.

Before the duo performs as part of Bremen Cafe’s 10-Year Anniversary Party tonight, Saebra & Carlyle spoke to Milwaukee Record about the project’s unique origin, how their divergent styles come together, and where they hope to take the band that was more than 10 years in the making.

Milwaukee Record: How did you meet?


Carlyle Nowak: Gloria Jean’s. Mutual friends of ours got us jobs there.

Saebra Laken: Instead of working, I would pull pranks all the time. We were like Jim and Dwight [from The Office] and we did anything we could to not work.

MR: When did this project initially start? If I’m not wrong, you started playing out around Halloween, right?

SL: It was September, actually. It’s kind of complicated because we started five years ago. Literally, we tried one night. We made two songs and then we never played music together again. We’ve been trying to make music together for like 10 years now.

CN: I was just in all these different bands around the state, but now I’m in St. Francis and she’s in Bay View, so it was easier to practice, I think.

SL: He’s been playing in bands since straight out of high school.

MR: And what’s your musical background, Saebra? I know you more as a visual artist.

SL: I’ve always loved music and have been a part of music, doing the choir thing in school and stuff. Once I got out in the real world, I taught myself guitar and wrote my own acoustic songs. Then I did a little bit with Sean Raasch from Twin Brother and [former Twin Brother drummer] Tyler [Nelson] in something we called The Ghosties like 10 years ago. Then I did something called Weird Wish that lasted one show. So everything has been kind of temporary and I’ve kind of just made music on my own otherwise. The whole time, I was like “Carlyle, we need to make music together.” I did my thing and he did his thing, then the timing was just finally right.

CN: I think we would say it’s Dolly Parton meets Jefferson Airplane, but that’s probably not true at all.

SL: I just naturally make really sad songs, but we’re trying to move past that. We’re trying to branch out past sad girl songs into this new rock and roll. I can’t really describe it. It’s a fusion of everything that we love…like apocalyptic western or something.

MR: With your hope to expand the sound beyond, as you called it, “sad girl music” as the project grows, is there a hope to bring it beyond a two-piece down the road?

SL: We’re definitely 50-50 right now. He writes the songs and I write the lyrics and melodies, but we want to expand.

CN: We’ve always talked about having a drummer and a bass player for a full band, but it’s always going to be us two. We’ve always had that vision of what it would be from the beginning. Now that it’s come to fruition, we’re definitely going to do it the way we want to do it.

SL: And if it’s just us, that’s fine. The music stands alone with just me and him, but we’d like to bring in a bass player and a drummer at some point. We have this vision of what we want to hear and we’re so connected. Once you start adding more people, that gets complicated. Right now, we just connect and it’s been like lightning in a bottle. When we first started, I told him I wanted to do a show a month, and we’ve been doing that—sometimes two in a month. It’s been great momentum so far. 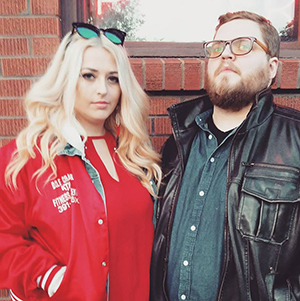 MR: Other than playing a show a month, what are some goals you have this year?

CN: This year, we want to make a name for ourselves here in Milwaukee.

SL: Absolutely. Milwaukee is so interconnected, so I feel like our goal this summer is to play out a lot here—all the summer festivals—and build our body of work, put out an album, then starting branching out to places like Madison and Chicago. We’ll go from there and hopefully put the next 10 years into this.

MR: Let’s get into the Bremen 10-year anniversary show. Is there anything you want to say about the bar and what it means to Milwaukee music?

SL: What a great staple, especially for free shows. You can come in and see local bands for free, then the bands get paid out of the till. It’s a win-win situation. And there’s a family atmosphere, like where you always recognize somebody when you go in there. It’s a great bar.