A lot can change in five years. During the half-decade span since PUP made its Milwaukee debut at a half-full Turner Hall in the summer of 2017, the Canadian pop-punk quartet that fashioned a small-but-impassioned fan base on the strength of its first two albums has put out three more releases and, along the way, become one of the biggest names in modern punk. Roughly two months removed from the release of The Unraveling of PUPTheBand (the band’s latest and most critically acclaimed album), PUP returned to Milwaukee as part of its “Thank Fucking God” Tour to treat a significantly more packed Turner Hall to an endearing and energetic Monday night performance that traversed its altogether commendable catalog.

Before PUP did its thing, the ballroom belonged to Oceanator. The Brooklyn-based project helmed by Elise Okusami kicked off the show in grand fashion with a memorable 35-minute performance. The set list included cuts from the up-and-coming act’s 2020 debut (Things I Never Said), this year’s Polyvinyl Records follow-up (Nothing’s Ever Fine), and self-released EPs that found Okusami and company carefully careening between catchy garage rock standouts like “Bad Brain Daze” and heavy, “low boy guitar”-driven numbers like “Inhuman.”

Once Oceanator made its presence known, Angel Du$t took the stage. The genre-hopping Baltimore band justified the heaps to press and boatloads of buzz they’ve received recently with a fun and frantic outing. With a set largely populated with songs from last year’s YAK: A Collection Of Truck Songs, Angel Du$t touched the edges of thrash and hardcore at times, but also veered in the direction of subdued psych and—stay with us on this one—material that vaguely reminded us of Faith No More and The Police at times. Disparate as their 13-song set was, Turner Hall was on board and properly primed for PUP after Angel Du$t’s exodus.

Around 9:50 p.m., John Tesh’s unmistakable “Roundball Rock!” was piped over the venue’s P.A., signaling PUP’s turn on Turner Hall’s stage. After the last notes of the iconic NBA On NBC theme played, the headliners wasted no time supporting their latest release with a potent one-two punch of “Four Chords” and “Totally Fine,” the first two songs off The Unraveling Of PUPTheBand. Any concerns they’d neglect their past material were quickly put to rest, as they chased the newcomers with the anthemic pairing of “My Life Is Over And I Couldn’t Be Happier” and “Dark Days” from its first two albums. The trend of catalog-commingling continued for the remainder of the concert.

Last time they were in town, PUP played about 50 minutes. This time around, the band was on stage just shy of 80 minutes as they amply represented all of its records with a few songs from each release sprinkled throughout the set. Brand new single “Matilda” was immediately chased by the beloved The Dream Is Over combo of “If This Tour Doesn’t Kill You, I Will” and “DVP.” Hell, they even played “Edmonton” off 2020’s This Place Sucks Ass EP. As different eras of the band’s now-expansive collection of material were visited, longtime fans and newcomers both had recurring reason to celebrate. In fact, as the pit intensified and crowdsurfers grew increasingly more bold, the stage doubled as a Lost And Found, as band members spent time between songs trying to reunite orphaned shoes and a pair of badly broken eyeglasses with their rightful owners.

With a rare off day ahead of them, singer Stefan Babcock warned a capacity Milwaukee crowd that it was in for “a slightly less professional PUP show than usual,” but that looseness wasn’t evident at any point their tight, lively, and true-to-album performance. If anything, the “Friday” feel the band spoke of early on was only displayed by how much fun they seemed to be having. Babcock recalled the band’s regrettable decision to use Kid Rock’s “Bawitdaba” as walkout music the last time they were in town. They deviated from recent set list patterns by playing “PUPTHEBAND Inc. Is Filing for Bankruptcy” just because they wanted to (despite their claims of it not going over well in previous attempts). They playfully roasted particularly pitiful stage divers.

It’s hard to think of a better way to have spent a dreary Monday night in Milwaukee than seeing PUP, Angel Du$t, and Oceanator…unless you’re the guy whose glasses were shattered. It took five years (nearly half of which was due to a pandemic, of course) to get PUP back on stage at Turner Hall, but thank fucking god they returned to Milwaukee. Hopefully we’ll see them again sometime before 2027. 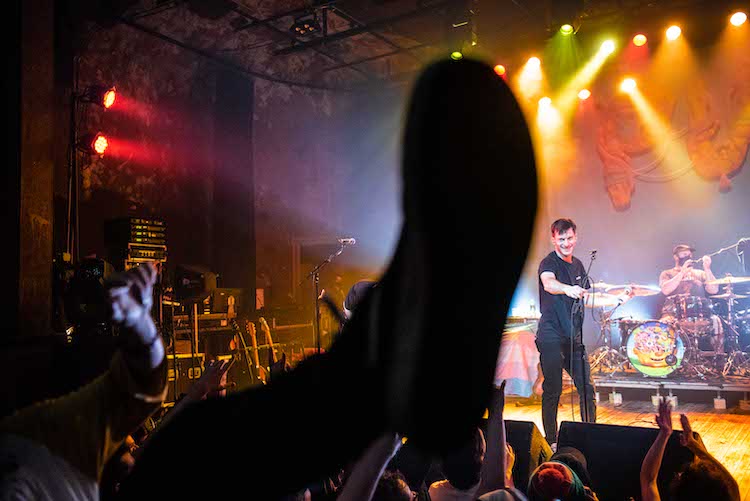