Back on November 1, Milwaukee musicians Johanna Rose (New Boyz Club, Ruth B8r Ginsburg, Thistledown Thunders) and Carl Nichols (Painted Caves, RAS Movement) packed up their instruments, passports, and a few other belongings and went to Europe. Since they landed in Berlin, Germany, the duo—which performs together as “Nickel&Rose“—watched from afar as the political power in their homeland shifted drastically. Along the way, they spent weeks writing new material together, their debut EP was released digitally, and Nickel&Rose played extensively in France and Germany, with stops in Amsterdam and Prague as well.

About halfway into their four-month artistic excursion through Europe that will ultimately take them to nine countries before they return home in early March, Nickel&Rose is set to release a music video they shot in a German pedestrian tunnel 80 feet underground. In addition to premiering the video, Milwaukee Record asked the nomadic musicians (via email) for highlights of their train tour, inquired as to whether the journey has helped them improve as performers, and got details on what to expect when Nickel&Rose returns to Milwaukee in spring. Both members contributed answers, but Rose drafted the response.

Milwaukee Record: A lot has changed in America since you left. What type of reaction have you encountered in Europe to things happening here?

Johanna Rose: A lot of people have said that after Brexit, they were not surprised by Trump’s rise to power. Trump’s win in America comes in the middle of Europe’s own trend of populist leaders. Generally, people are concerned because what happens in America impacts everyone.

MR: What are some highlights of your trip, both musically and non-musically?

JR: We’ve been lucky, no show has been a bad show. Even the show we had with four people in the audience that ended with one of our few attendees’ arrest felt good. Our shows have been generally well-attended and well-received. We’ve met a lot of great and helpful people who enjoy our music. It speaks to the power of music how we are able to connect to audiences, even though we don’t necessarily speak the same language. So much emotion is conveyed through melody and tone.

One of our favorite shows was Strasbourg, where the audience started clapping and chanting in unison at the end of our set. We were really confused at first until we realized it was the French encore. Another favorite was when we played in a club in Hamburg that was a converted semi-trailer. It was heated by a wood burning stove and lit by a funky hanging chandelier. It was a really lovely and intimate setting. Our other show in Hamburg was really fun, too. We played with a really cool local band, The Rain-Dance Kid, in a cafe and bar connected to this giant squat that was converted into lots of artist spaces, work spaces, cafes and a free store. In the courtyard really high up in between the tall buildings, artists hung giant colorful balls made out of open umbrellas sewn together and an old bus was converted into a sauna. We really loved Hamburg.

We both love traveling, and doing this tour by train has allowed us to see so much of the region. Every city has its own unique charm with beautiful architecture and landscapes in between. From the Christmas markets to the graffiti-covered squats, we’ve gotten to experience so much. I love that you can smoke in bars and that there’s a new graffiti masterpiece around every corner. Carl loves how there’s Turkish food everywhere. We’ve had such a good time here so far and are really looking forward to the next part of the tour in Eastern Europe.

MR: Do you think these new experiences have helped you develop as artists, musicians, and people?


JR: Yes. We have gotten better at playing as a duo. We’ve learned the nuances of each other’s playing.  Being in Europe gives us the freedom to be more vulnerable because no one knows us here and we are more vulnerable when it’s just two of us on stage. We both play in a lot of larger bands in Milwaukee—Painted Caves, De La Buena, RAS Movement, Thistledown Thunders, New Boyz Club, Ruth B8r Ginsburg—and playing as a duo is a whole new thing.

This tour and project, Nickel&Rose, came together very naturally and very quickly. Had we stayed in Milwaukee, it would very easily become a side project because of how many bands we both play in. But here it is priority and something we literally rely on to survive. The trip, at times, has been physically exhausting and mentally draining, but we persevere. We really have had to learn to trust each other as people and as musicians.

MR: How did you get connected with the person who shot your video?

JR: We knew Christopher Gorski from Milwaukee. Chris use to run 801, an artist space and ad hoc gallery, on Center Street, but he lives in Hamburg now. We meet German Chris, Christopher Krenz, through him. Chris and Chris are really fun, creative people. Together they made a fantastic team to shoot a video 80 feet underground.

We wanted to do a live video of us playing somewhere that reflected the amazing places we were visiting on our travels. The Old Elbe Tunnel in Hamburg was perfect. It was built in 1911 and is 1,398 feet long and 80 feet underground. It connects Hamburg with the shipyards on the south side of the river Elbe, so it’s underwater.

Nickel&Rose – Julien from dynocigarette on Vimeo.

While its wonderful acoustics are generally reserved for drunken football—the soccer football—fans, we were very happy to harness them for our music. It’s typically a pedestrian and vehicle tunnel, so we needed to shoot in the middle of the night when it was closed to cars. Some of are takes got crashed by drunken Brits, but all in all we managed to get a good take with the help of some friendly Italians. Playing in the tunnel was a really wonderful experience. [It was] odd and beautiful, like much of our tour so far. We are happy to have caught it on tape.

MR: Are you excited to come back to Milwaukee?

JR: We miss our bands. We miss friends and family and I’m super sad to miss Riverwest FemFest this year. However, we are in no rush. The more we travel, the more we learn about ourselves as people and musicians, and it’s hard to get lonely when you’re traveling doing what you love with someone you love. We do look forward to coming back to Milwaukee and having a physical release party of our EP, A Place To Call Home, in April and playing out this summer in Milwaukee. At this point, we’ve played more shows in Europe than Milwaukee, so it will be fun to play in our hometown.

MR: Can you give any more details on the EP?


JR: We recorded A Place To Call Home and digitally released the four-track EP with Milwaukee’s new label, VoodooHoney. We recorded with the excellent engineer and musician Timothy Russel. Our last day of recording was the day before we left. Afterwards, our good and talented friend Ernest Brusubardis IV put down violin on the track “Julian,” and our other good friend Jay Anderson played saxophone on the track “Sugar Take.” The name of the EP has felt quite fitting, too, during these nomadic months. 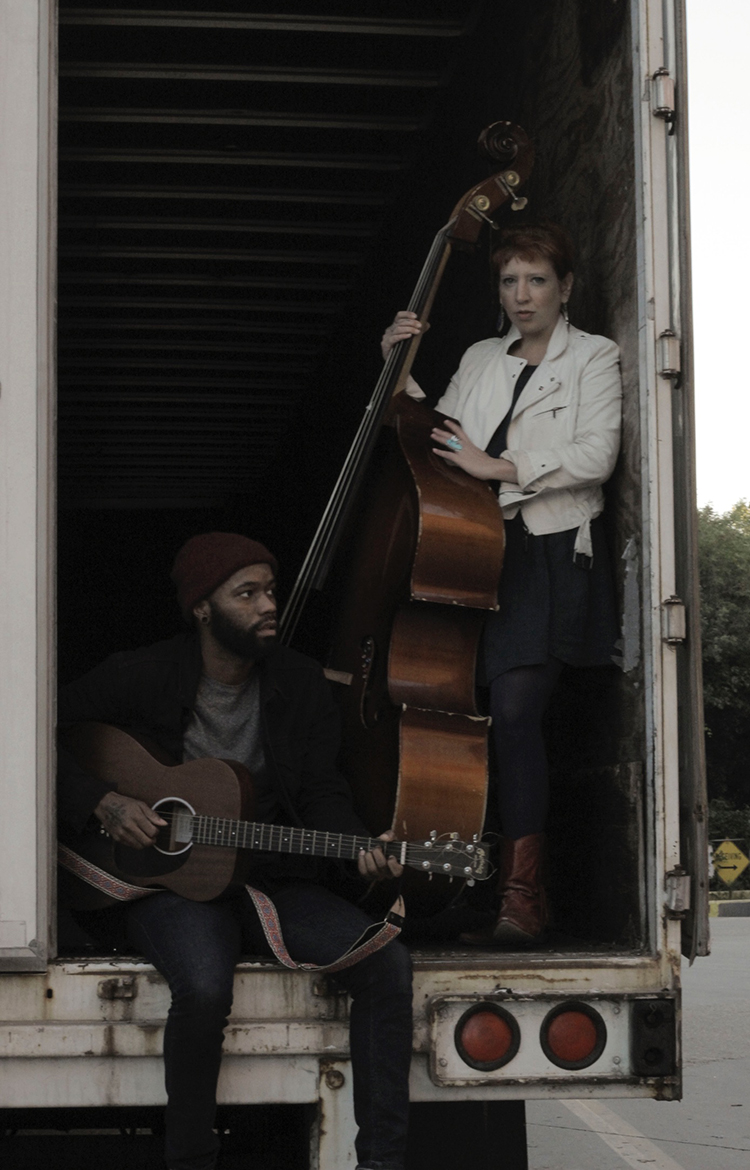