For most of my immediate friend group, last March’s Shellac mini-tour, which happened exactly one year ago, was the last live music experience any of us were able to take in before COVID-19 shut the world down. As a number of my Chicago pals reminisced on Thursday about the show at Lincoln Hall, I went to the Google machine to remind myself on exactly what day the Milwaukee show happened. Sure enough, it was a year ago today…and, much to my surprise, I wrote a review of it for Milwaukee Record! Well, holy shit. I had completely forgotten.

Scrolling through the words I had put down after coming home from Turner Hall for what would be the last time for a year, something struck me as memory started flowing back to the fore: I didn’t write a single goddamn word about COVID-19, or how everyone at the show was feeling about it. I remember now that it was a conscious choice because, well, I had no idea how to write about it. In fact, I didn’t know if mentioning it was a good idea at all, since so many of us at the show were wondering if being there was a good idea in the first place. Would it make the Turner brass angry if I pointed out the unease of a crowd of people simultaneously excited for a long-awaited show (it was Shellac’s first appearance in Milwaukee since 2009, by my recollection) and already starting to distrust the strangers next to them and their potentially ooky germ breath? Would the members of Shellac feel offended if I pointed out that pretty much everyone at Turner Hall seemed to be wondering if the show going on was a good idea? Ah, such quaint concerns—like the members of Shellac would even read it! It was a different time. We were all so young, so naïve.

Reading it back, the review now feels incomplete. In describing the typical rote aspects of your typical rote Shellac-brand rock show (what albums were represented in the set, how the question-and-answer banter went, the amount of pummel Todd Trainer delivered behind his drums, etc.), I ended up writing a huge elephant into the room. So let me make up for that now, as the memories of the last show I saw before the world went to shit flood back into my mind. 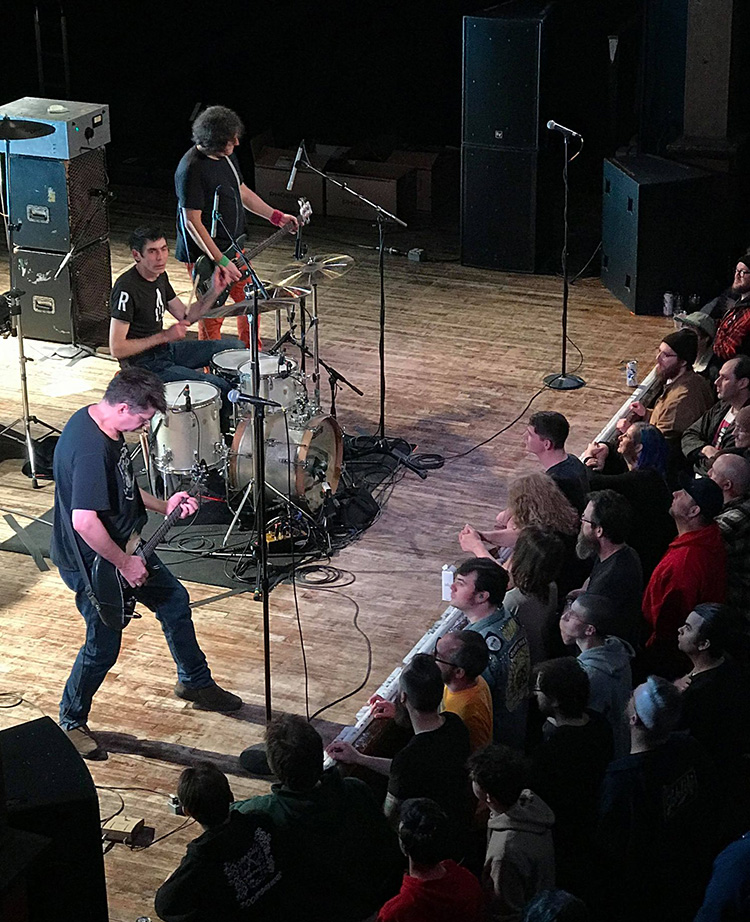 The truth is this: for the last year, what I have mostly remembered about this show wasn’t the music, it was the anxiety. The conversations my wife and I had with friends before opening act Loki’s Folly took the stage stand out the most, because they were some of the last in-person conversations we had with these people. I remember lots of nervous chuckling and awkward jokes about colds. I remember speculating aloud whether our bands’ shows would be happening as scheduled in a few weeks (one of my bands was set to play the Hideout in Chicago for the first time ever later that month. Ugh!). I remember laughing about something and then freezing in horror as a piece of spittle flew from my mouth toward a friend in our conversation circle. I’m pretty sure we locked eyes in confused, semi-horrified silence, not sure how to react but telepathically agreeing to never speak of it again. (Sorry!) A friend told me “I don’t care, I’m hugging people tonight,” grabbing me in an embrace that he apologized for the following day. I’m certain that was the last time I hugged someone I wasn’t married to. Dear god, what were we doing? What were any of us doing there? Did any of us even own a mask yet?

Oh, wait, no, I remember what we were doing there. When Shellac took the stage, even with Steve Albini’s near-immediate guitar-strap malfunction and the resultant earlier-than-expected Q&A from Bob Weston, all the anxiety, at least for me, was forgotten. Because Shellac were on stage and Shellac kicked ass. Yes, they played “My Black Ass” and “Copper” and “Steady As She Goes” and “Billiard Player Song” and “Riding Bikes” and a bunch of new songs that I only barely remember now, but recall getting completely lost inside. Bob deadpanned his way through bass line after meaty bass line, and Todd hammered his kit like it was the second-last time he’d ever be on a stage. And Albini was Albini, pivoting on protractor-precise angles between sly sarcasm and cracking wise, and dropping poignant soliloquies about Milwaukee punk bands of yore, and the dehumanization inherent in human distancing.

Yeah, let’s talk about that last one. Last year I wrote that a “dramatic soliloquy was inserted into the middle of ‘Wingwalker’ as Albini launched into an observation about how distance between people causes them to see their fellow humans as ‘dust.’” Well if that wasn’t just fucking prescient. Steve was talking about airline passengers staring down on the world, but is it too much to think about how eerie that notion is after a year of social distancing? After a year of enforced separation from friends and family? What’s the lyric from that song? “And a plane becomes a metaphor for my life.” Well, I suppose that’s not exactly true. Distance hasn’t caused me to perceive other people as dust so much as I feel like I’ve become dust to everyone else. It’s hard to feel otherwise, seeing some of our fellow humans resolving to “live their lives,” behaving like the new normal didn’t apply to them. Were they taking off into the stratosphere, leaving the rest of us behind like specks of dust on the ground?

But new baseline feelings of chronic abandonment and borderline despair were yet to come on March 12, 2020, because in the throes of “Wingwalker’s” pummeling, metronomic beat, some of us in that room felt like part of something larger than ourselves, like a community, for maybe the last time for a while—how long, we weren’t sure. But we knew we were having a pretty kickass time.

And then we went home, and Shellac went to Madison, and then they canceled their Minneapolis show, and then the world went to shit.

A year later, we’re finally starting to come out the other side. Vaccines are becoming available. Soon, those of us who haven’t been social in a year will be able to make baby steps back into a world where we can see loved ones again and where maybe we won’t feel like specks of dust anymore. I hope that relearning how to function in crowds comes back to me the way the memories of this show came back after reading last year’s review. I feel foolish for that now, for not grabbing onto the feeling of being in the presence of live music and refusing to let go. I’m encouraged, though, that those words I wrote last year brought it all back. Thanks, pre-pandemic me! You just might still be buried somewhere inside me after all. 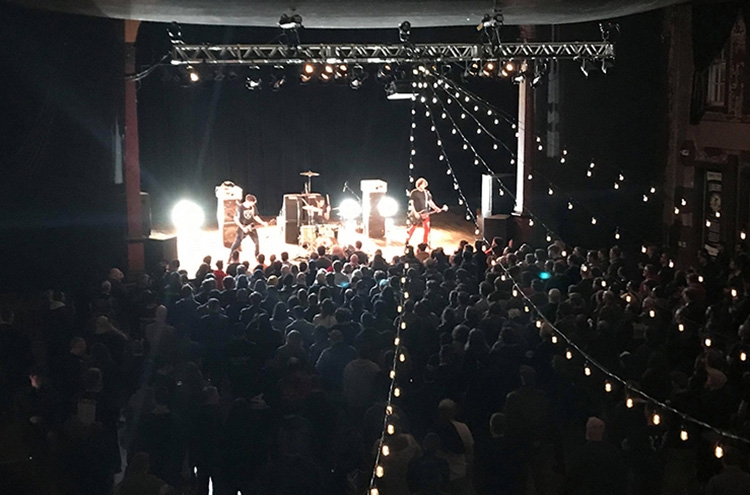