Update: According to Piet Levy of Milwaukee Journal Sentinel, Ed Sheeran’s Miller Park concert will be rescheduled if the Brewers make the World Series. He spoke to Tyler Barnes, Brewers vice president of communications, who said the following about the matter:

“If the team advances far enough into postseason play, we will announce a new November date for the Sheeran concert. That announcement would likely come sometime in mid-October.”

So there you have it. If the Brewers win the NLCS, the Sheeran concert will likely move to a night in November. If they don’t, the concert will go on as planned on October 23. Read the original post below where we pretty much called it. Go Brewers!

At the risk of jinxing a red-hot, song-inspiring team that just swept the Rockies in the NLDS and got people free burgers, we have to acknowledge the Milwaukee Brewers are only four wins away from the World Series. Though the Brew Crew winning its first National League pennant in team history and reaching the Series for only the second time ever would surely be cause for celebration, Milwaukee’s postseason run might also be a cause of confusion for small-but-passionate sect of Brewers fans who also like a certain pop musician.

As the rest of Wisconsin hopes to see Milwaukee playing deep into October, some ticketholders are left to wonder how the Brewers making the World Series would affect the status of Ed Sheeran’s October 23 show at Miller Park. Here’s almost everything you need to know about this highly-circumstantial scenario that we totally hope comes true.

No matter how long the NLCS lasts (or the ALCS, for that matter), the World Series will begin on Tuesday, October 23. Regardless of who’s in the World Series, the first game will be hosted by the American League representative, since—following Cleveland’s elimination at the hands of the Astros on Monday—all remaining AL teams had a better regular season record than both Milwaukee and Los Angeles. So Games 1 and Game 2 (October 23 and October 24) will be hosted by either Boston, New York, or Houston. Thus, it’s safe to assume that, regardless of Milwaukee’s postseason fate, Sheeran will play his Miller Park show as originally scheduled, right? Not necessarily.

Though Milwaukee’s first hypothetical home game of the World Series wouldn’t be until October 26, there are a couple major things both Sheeran and Miller Park should consider before going forward with the October 23 concert. The first thing is potential damage to the field. Miller Park has hosted concerts during the season before, but they’re typically scheduled in the offseason or during extended periods in which the Brewers won’t be playing at home. For example, when Paul McCartney performed at the ballpark on July 16, 2013, the Brewers were in the middle of the All-Star break. Milwaukee didn’t play in at Miller Park again until July 19. 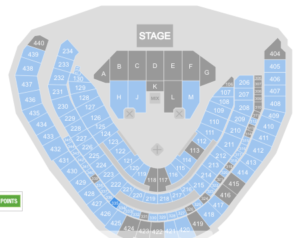 Yes, that three-day turnaround is the same amount of time the Brewers’ grounds crew would have to get ready for a potential Game 3, but would it be wise to risk the state of the infield dirt and outfield grass before Milwaukee’s most important home game since 1982, all because of an Ed Sheeran concert? All but maybe 40,000 people would probably say it’s not.

This brings us to the second thing to consider: If the Brewers are playing their first World Series game in more than 35 years, would the momentous occasion have a noticeable impact on Sheeran’s turnout? In a state where sports reign supreme and at a point in which the Brewers bandwagon is nearing capacity, the impact would probably be noticeable at best and devastating at worst. Back in 2016, Kansas canceled an October 31 concert at the Goodyear Theater in Ohio because it coincided with Game 6 of the World Series, in which Cleveland had a chance to win a title. Yes, 2018 Ed Sheeran is exponentially more popular than 2016. Yes, the classic rockers’ decision to bow to baseball happened on a potentially-Series-clinching night and not during Game 1. Still, failure to move the concert could find resale sites being flooded with people trying to unload their Sheeran tickets and make any remaining seats tough to sell.

To their credit, the Brewers and Miller Park knew the potential for a scheduling conflict when Sheeran’s “2018 North American Stadium Tour” was announced back in February. The bottom of the show announcement on the Brewers website mentions a potential make-up date, saying “As is the case with all Miller Park events, this concert is subject to change based upon the Milwaukee Brewers home schedule.”

The “home schedule” verbiage could suggest the show will go on no matter what. However, this other statement on the same announcement post keeps things a little more vague.

Would the potential of an abysmal turnout qualify as a prohibitive reason to reschedule the concert? Is the possibility of damage to the Brewers infield and outfield just days before the team would host two World Series games enough to move it? As far as dates “falling after Brewers Postseason play has concluded,” it appears Sheeran has no shows scheduled for November 1 (the day after a possible Game 7), November 2, and a few other early November dates before ending the tour November 10. After that, he has nothing in the books until a pair of shows in the UK next August. So rescheduling the concert seems doable. But will it happen?

The NLCS won’t only determine whether Milwaukee will stay alive to compete for the team’s first World Series title in franchise history. Apparently, the best-of-seven series might also impact when (or whether) Ed Sheeran will play at Miller Park. A lot has to go right for this highly-circumstantial scenario to even have the chance to unfold. For the sake of Brewers fans everywhere, here’s hoping it does.