While Brady Street may not retain much of its former countercultural artsiness, the intersection of Sciortino’s Bakery, St. Hedwig’s Roman Catholic Church, and Art Smart’s Dart Mart alone suggests the neighborhood has held onto far more of its history than its Madison equivalent, State Street. It’s no longer the Bohemian center of Milwaukee, but on this gorgeous summer Saturday, Brady Street became a cultural melting pot brewing with creativity and collaboration, suggesting that the city’s music scene may not be as…insular as we sometimes suspect.

2:07 p.m. – Our day begins at the corner of Brady and Humboldt, waiting for Myles Coyne to start at the Brady Street Locals Stage. The makeshift wooden counters strewn about the pavement seem like an ingenious idea. People just looking to set down a beer or lean on something will constitute an audience whether they like it or not.

2:13 p.m. – Go figure: It’s the first Rusty Nickles [sic] show with drummer Steve Vorass (I’m Not A Pilot, The Revenge Society), and a monitor/kick drum conflict derails the first tune of the set. “It’s throwing us down the rusty road to shitville,” says Coyne. After a quick reboot, everything seems fine.

2:22 p.m. – The band’s style can be shuffling and imprecise, but they build to a joyous crescendo when it matters. This rendition of “Max” is a real barn-burner, and Coyne’s singing has improved markedly since the recording of his 2013 debut Take Things As They Come.

2:28 p.m. – Coyne’s first live foray into electric guitar occurs as the band plays “Empire,” a standout track from the recent The Sound Of Young Milwaukee compilation, and suddenly this is a smokin’ alt-rock band. Newport-Folk-Festival-1965-caliber outrage does not ensue.

2:46 p.m. – Mandolinist Jordan Maye once again keeps dead air from killing the momentum while Myles switches guitars and tunes, but even more remarkable is the way her instrument often seems to be the glue holding these ramshackle rock songs together.

2:50 p.m. – As the band closes with a new song called “Life Living On The Bleeding Edge,” we’re fully sold on the less folk, more rock approach on display today. Coyne’s dabbling in a multitude of projects ensures he’ll never be tied down to a single style, but this performance felt like a fresh new direction.

3:01 p.m. – The line outside the long, white Glorioso’s tent indicates that today’s cheese sampling is a much bigger draw than any band. On the other hand, beer lines are almost nonexistent, and Port-A-Johns are plentiful. Call us crazy, but it almost seems like someone put some thought into the logistics of this festival. Weird.

3:03 p.m. – We’re starting to suspect that the handlebar mustache is the new version of the ironic mullet from ten years ago. An unnamed record and t-shirt tent proudly displays Bay View-specific shirts with the mustache adorning a penny-farthing bike. Quaint!

3:15 p.m. – Webster opens with his new fan-appreciation track, “Marinate.” Initially he comes off as sloppy despite the high energy, but this may all be part of the act. As evidenced by his collaborative raps with a multitude of guests, he can be sharp and precise when he wants to be.

3:30 p.m. – A second guest appearance by Milwaukee native/Chicago resident Rahrah The Savage showcases some of the afternoon’s best technical verbal skills by both MCs. There hasn’t been the slightest lull in enthusiasm by Webster so far. Meanwhile, an elderly gentleman weaves through the crowd, balancing various drinks on top of his head while dancing. The juxtaposition of cultures going on here is a bit surreal.

3:35 p.m. – Fresh Cut Collective emerges as Webster’s live band for the remainder of the show. It’s not the usual full-on FCC attack, but they provide a perfect array of backing grooves. This is mostly party rap, but it’s no joke. Webster embodies star bravado, and he has made this live set feel momentous in a way that last year’s Desperate Youth album barely hints at. Humor, intensity, introspection, irreverent unwholesomeness—the elements are all in place.

3:59 p.m. – Webster announces that his new album, Renaissance, will be out in the fall, and treats the crowd to a new track from it for the finale. If the record is able to capture the potency of this live show, it could prove to be a breakthrough work.

4:14 p.m. – We’ve wandered back to Humboldt, where Minneapolis garage-soul outfit Black Diet proves that all hope is not lost in the world of band names. Frontman Jonathan Tolliver’s voice is immediately captivating, and the band reminds us of early Black Crowes.

4:20 p.m. – Add a bit of post-punk/shoegaze to the mix. Black Diet continues to impress.

4:26 p.m. – Okay, this song is total cheese. We can’t lie: it sounds like Hootie And The Blowfish. The spell is broken.

4:28 p.m. – A cover of LCD Soundsystem’s “All My Friends” gets very intense by the end. The occasional bouts of syrupy blandness don’t really undermine the many talents of this group, which would fit very nicely on a bill with Phox.

4:55 p.m. – If we needed a dose of actual folk music, there’s a guy on the sidewalk near the hardware store strumming an acoustic guitar, playing harmonica, pounding out rhythms on a suitcase and shoe-mounted tambourine. Apparently the original talkin’ blues spirit is not dead yet.

5:02 p.m. – We can’t decide if Soul Low is Milwaukee’s equivalent of Meat Puppets or Modest Mouse. Either way, the band is pretty much riveting from chord one.

5:10 p.m. – Some allegedly intoxicated fellow picks up a mannequin arm from the stage and begins to dance with it as Soul Low tries not to get distracted.

5:25 p.m. – Soul Low plays a brand new song with an intense, noisy horn-and-guitar breakdown. We are about ready for some kind of new release by this band, yes?

5:33 p.m. – As the band clumsily announces WebsterX, he interrupts them. “You know what’s funny about Soul Low is you guys suck at talking,” he says, joining the band for some sort of indie rock/funk/rap hybrid thing that’s at least partially successful, although the rap element is so washed out in reverb that it’s impossible to understand.

5:50 p.m. – It’s been a very strong performance for the most part, but covers of Blondie’s “Heart Of Glass” and Sugar Ray’s “Every Morning” don’t exactly bring it home. Soul Low is much better at performing Soul Low songs.

6:20 p.m. – Ryan Holman finally comes onstage for his first stand-up comedy interlude. His jokes are largely reliant on homophones, so not necessarily gut-busters, but his delivery is pretty effective.

6:40 p.m. – This is another band whose energetic hybrid of styles is dragged down at times by its hokey elements, like the frequently chintzy keyboard tones and sometimes cheesy electric violin. The rhythm section is spot-on, although bassist Eris Campbell is often effectively the lead player. He’s seriously inventive enough to carry the entire band at times.

6:49 p.m. – At any point during this festival, if you apply yourself, you can spot a shirt glorifying not a specific Milwaukee institution but the city itself in some quirky motif or other. It’s beginning to seem Portlandian.

7:25 p.m. – Obviously there’s no room for the Christler on Brady Street tonight, so in its stead, some kid in a black Ignite Fest t-shirt and cargo shorts walks around with a shoulder-strapped bullhorn preaching the gospels. Not quite as effective.

7:39 p.m. – Moseying to the east end of Brady, we discover that the Nomad favela is still in effect! Despite its rooflessness, it smells strongly of B.O., and BelAir tacos lend it an air of authenticity.

7:50 p.m. – The Michelob Ultra East Side Vibes Stage has been rocking to everyone’s favorite Buggles, Tubes, Sweet, and Van Hagar hits as the crowd awaits Midnight Reruns. Pre-Recorded Music is killing it tonight.

8:05 p.m. – “Summer Smoker” is appropriate for about the third day so far in 2014. This festival is curiously short on hipsters compared to Riverwest or Bay View events, but they coagulate quickly along with straight-up rockers of all ages as the Reruns play.

8:25 p.m. – Guitarist Karl Giehl graciously indulges a sober-until-proven-drunk lady named Carolyn as she somehow gets onstage and helps him play his guitar during “King Of Pop.”

8:27 p.m. – Considering the band recently played an all-covers set on the Fourth of July, a Thin Lizzy tune is basically required. “Dancin’ In The Moonlight (It’s Caught Me In Its Spotlight)” is note-perfect and Midnight Reruns have the crowd eating out of their hands.

8:35 p.m. – Just like that, after an appropriate and rousing rendition of Cheap Trick’s “Surrender,” the set is over. It was great, but the mere half-hour of music left a lot of great songs unplayed.

8:47 p.m. – Ryan Holman is back onstage to set up the main event, now less focused on wordplay and more on squirm-inducing insensitivity. He wins over maybe half the crowd, surely alienating the more easily offended, but he gets at least a couple of shock-laughs out of us.

9 p.m. – After a weird bit of last-minute sound-checking, The Celebrated Workingman open with the classic “Island.” When Mark Waldoch’s voice starts out this strong, you know it’s gonna be a good night.

9:22 p.m. – Although the group threw in the towel many months before the February release of Don’t Let Your Memories Kill You, they’ve clearly rehearsed the new material. “10 Chimneys” and “Hung Out To Dry” both sound fantastic.

9:28 p.m. – Waldoch introduces “Some Mistakes Are Worth Repeating” by informing everyone that “the STD clinic is right up the block.” It’s another in a string of infectious (whoops) pop nuggets that haven’t lost any luster since the last time they’d been dusted off.

9:43 p.m. – As time runs out on what is ostensibly this band’s final performance, Waldoch can’t resist a few jabs. “Most of you have no idea who we are,” he deadpans. “You kinda fucked up. You had seven years.” The “Plans” encore is every bit the blistering, ecstatic finale it has always been at CWM shows. Who knows if this is actually curtains for the local heroes, but they certainly left us wanting more. 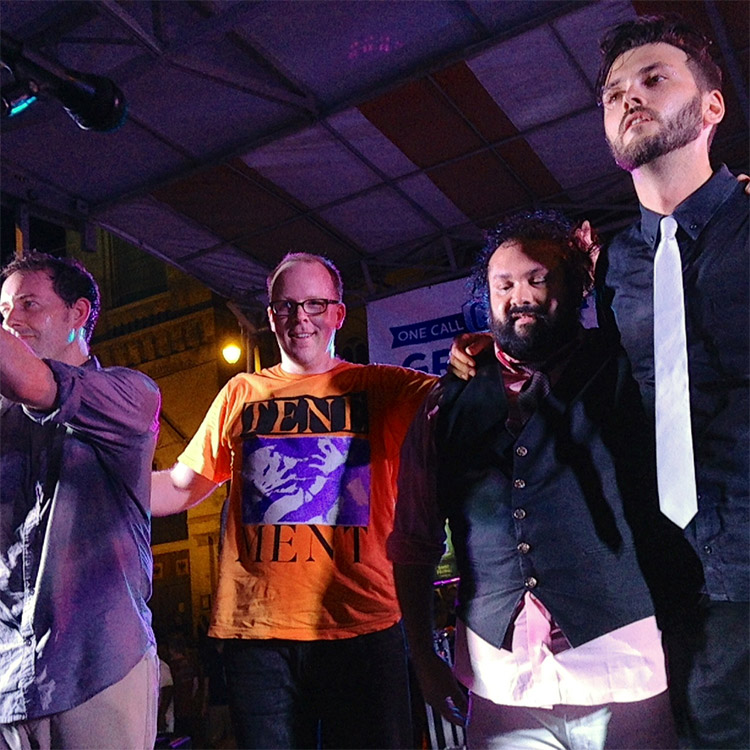