Though there’s always something to be said for an original, sometimes the lessons learned and experience gained at a trailblazing establishment can yield even greater results the second time around. With little more than a change of scenery, a sidestep in regard to ambiance and clientele, slight departures from a menu most locals committed to memory long ago, and some gastronomic je ne sais quoi, places like Oscar’s Pub & Grill—opened in 2011 by a former Sobelman’s employee—are doing notably different and arguably better things than its regionally-renowned contemporary. Two chefs with stints at Hinterland, Wolf Peach, and Odd Duck on their CVs recently struck out alone to do exciting new things at DanDan. In that same spirit, those taken by the dirt cheap delicacies Virginia Street stalwart Conejito’s has been serving up on paper plates since 1972 are going to love La Casa De Alberto (624 W. National Ave., 414-643-5715).

Since opening in 2014, the venture of long-tenured Conejito’s employees Alberto and Laura Gonzalez has quietly—perhaps intentionally so—carved out its own identity just blocks from their old workplace and (until recently) within spitting distance of the bombastic novelty of La Perla. What La Casa De Alberto lacks in history, charming-though-wasteful plating, and gigantic mechanical peppers, it more than makes up for in both flavor and price point.

The space: The storefront at 624 National was the longtime site of Lopez Bakery. For a few nanoseconds, a Mexican joint called Terra Restaurant And Bar held the lease. Folks who can be counted among the few patrons Terra scared up in its brief occupation will find that little has changed, apart from the name and caliber of cuisine. The long, thin corridor barely manages 10 tables, arranged into two tight rows that run perpendicular to the abbreviated 10-stool bar. There’s also a small enclave of tables situated at the left of the entrance. The basic beige and maroon paint job is complimented nicely by mocha-colored tile flooring, along with wood accents on the base of the bar, the shelving behind said bar, and the ceiling tiles for some reason. Ironically, the tables are particle board. Save for a few floral paintings affixed to the wall every few feet, Alberto’s doesn’t put too much effort into the decor and, instead, offers diners distraction with three televisions and a window facing out on the activity of National Avenue. 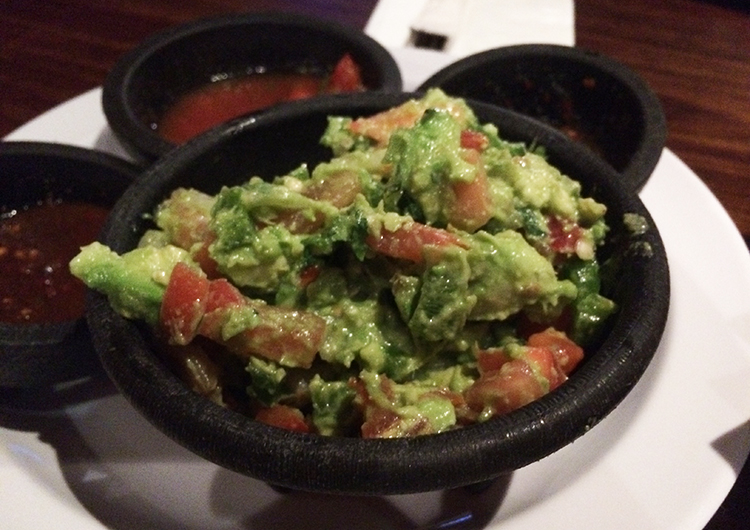 Milwaukee Record‘s food: Like Conejito’s, La Casa De Alberto gets by with a fairly limited menu. There are 15 standard domestic and Mexican brews, the florescent yellow so-bad-it’s-good house margarita, and a full bar. The food brings about unexpectedly good renditions of expected fare like stuffed pablano and relleno peppers, tostadas, chimichangas, fajitas, and burritos. There’s also a small cluster of breakfast offerings available from 10 a.m. to 2 p.m. daily (except Tuesday, when the restaurant is closed). On this particular visit, we started with a full order of guacamole ($5). Made fresh to order, it was replete with avocado and tomato chunks as well as diced jalapenos and onion. It, along with the trio of complimentary salsas and seasoned tortilla chips, made for a satisfying starter. 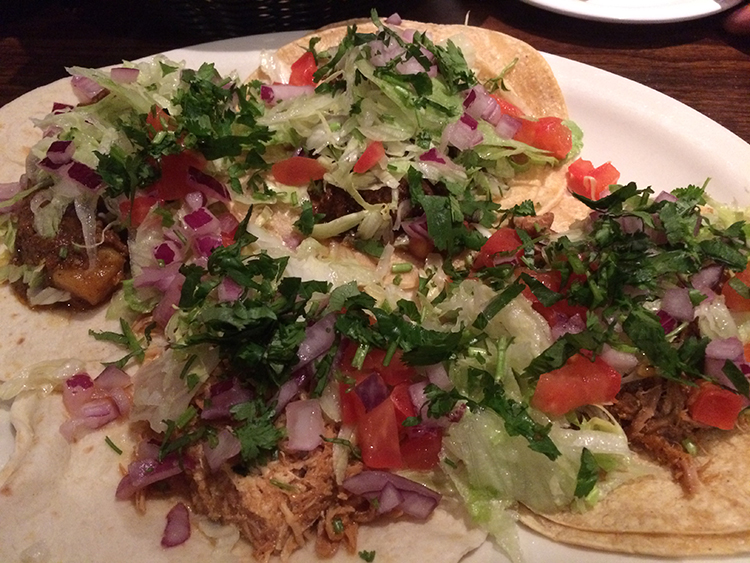 We resisted the temptation of our normal go-to, the rich and impossibly thick mole ($7 dark meat or $7.50 for white meat), which is well worth the work and mess that comes with carving it off the bone. Instead, we opted for tacos. They have their own section on the menu, after all. The steak, chorizo, and especially the fish tacos were enticing, but we went with Alberto’s Tacos ($6). The four-taco platter came stacked with lettuce, tomato, purple onion, a generous sprinkling of cilantro, and a choice of four meats—chicken, beef, pork, and al pastor—on either a corn or flour tortillas. We had one of each meat on an even split of tortilla varieties.

The shredded chicken taco was so juicy that it dripped liberally onto its yet-to-be-eaten brethren. There are worse problems to have. The pork was savory and its pastoral counterpart offered a similarly glorious saltiness, only with a smokey overture that made it the star of the show. That is, until we got to the beef taco. The marinated morsels of spiced bovine were so tender, chewing would’ve been optional if not for the aforementioned vegetables and hunks of boiled potato. Even without a side of rice and beans, we left stuffed with chips, guac, tacos, and a margarita. All for a pre-tip total of $15.

The verdict: Those seeking reprieve from bringing out of town guests to Conejito’s for the umpteenth time can revel in the unassuming and affordable authenticity of La Casa De Alberto. Though there’s sure to be disagreement as to which is better, it’s a debate few people would mind reviving again and again with alternating visits.