After 15 years in business, Triskele’s has officially closed. The chef- and owner-operated restaurant that opened on the corner of 3rd St. and Maple St. in late 2007 quietly called it quits back on October 8, according to a Facebook post made by Triskele’s co-owner Lynn Winter.

“Today we serve our last dish. We hope we at least helped to create even a portion of the great times for folks as we had here,” Winter says. “To all the friends we met and made along the way and to anyone and everyone who ever worked here or helped us out in any way; cheers from us to you.”

The closure follows news of the owners putting the property (located at 1801 S. 3rd St.) up for sale this past spring. Earlier this month, Milwaukee Journal Sentinel reported the building had been purchased by a restaurateur named Patrick Todd, who intends open a new restaurant and bar called La Pina in the space as soon as November 1.

Over the course of its memorable run, Triskele’s was a quaint and cozy place to enjoy elevated preparation of unpretentious dishes that ranged from seafood and specialty pasta to pub fare like cheeseburgers and mac & cheese. Once the pandemic hit, the restaurant completely shifted to a carryout-only model, which continued until its final day of service. Last year, we concluded our Carryout Chronicles article series with a remarkable meal from Triskele’s. Here’s how our review ended:

“It’s sad that it took a pandemic to let us know exactly how much we took this local gem for granted in the ‘before times.’ We give them credit for their actions and their approach throughout the COVID-19 crisis, and if/when they get on the other side of this nightmare in one piece, we’re going to let very little time go by before we belly up to the bar for some mussels, a local craft beer or three, and some other culinary wonders they create in their little kitchen on the corner of 3rd and Maple.”

Unfortunately, customers will not get an opportunity to have a last meal at Triskele’s. However, some folks are still able to take a piece of the restaurant home with them. Last weekend, they put some of their art, beer signs, and vintage mirrors on sale. As of Monday, some paintings, mirrors, and beer signs were still available for purchase (in person via cash or Venmo only).

Thanks for (almost) 15 years, Triskele’s. We miss you already. 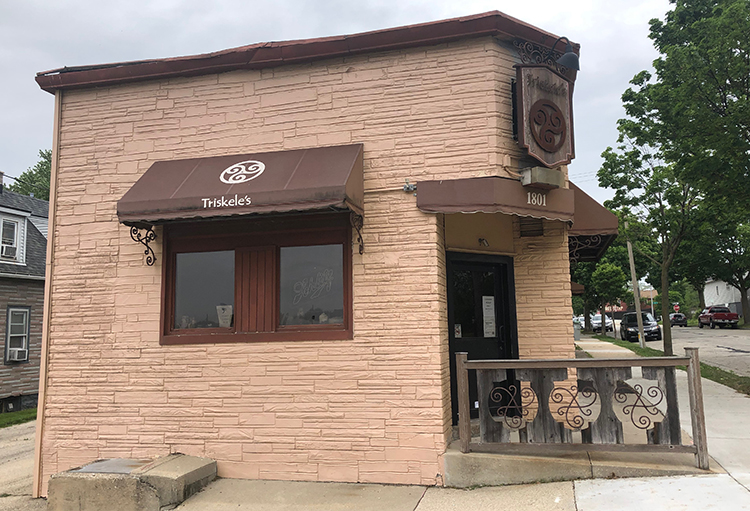