Peter Bagge should be a household name. Sure, he’s one of the most notorious underground cartoonists (you’re welcome for the oxymoron), but he really should be indecently famous by now. The amazing (and tragically deceased) comics critic Tom Spurgeon referred to Bagge as “one of the great figures in American comedy,” and that is no exaggeration. Few other artists will make you laugh until your belly hurts as often as he does, while at the same time making you marginally depressed and oddly endeared by aspects of human nature no one should celebrate.

In addition to his seminal comics Neat Stuff and Hate! and more recently an acclaimed series of biographic graphic novels, Bagge has been involved in multiple groundbreaking projects, collaborating with the likes of Gilbert Hernandez, Alan Moore, Dana Gould and Robert Crumb—a partnership chronicled in the recently released The Book Of Weirdo, which you should buy right now, from Lion’s Tooth, of course.

More than any other alternative cartoonist of his generation, Bagge has always seemed destined to find a multi-million mainstream vehicle, like Matt Groening, Mike Judge, or South Park‘s Trey Parker and Matt Stone. When I first met him in 1997, he seemed to be on track to do just that, developing an animated series for MTV in New York, a frustrating experience he later painfully dissected in this interview.

I was visiting the US from Brazil, interviewing some of the best cartoonists in the world with my photographer friend Carolina Pfister. We had already met Dame Darcy, Kaz, and Tony Millionaire, and all three of them told us about a party for Peter Bagge. I’m sorry to say we weren’t invited by the actual host, the great Jennifer “Queen Itchie” Nixon, but we decided to go anyway.

I have no pictures of that party, only a half-assed drawing in my diary, featuring the worst Peter Bagge portrait ever drawn. It was a bizarre experience to hang out with my art heroes in an intimate get-together in an Alphabet City apartment—Bagge was there, of course, as well as all the aforementioned cartoonists, plus Joe Coleman, Gary Leib, and others. No idea how it got to this, but at one point a lady took her clothes off. As she displayed her truly amazing body, my 23-year-old self thought “Oh, no, it’s a suruba” (the Brazilian word for group sex). Luckily, we were standing by Gary Leib, who muttered “Don’t worry, it doesn’t get any worse than this.” And it didn’t. 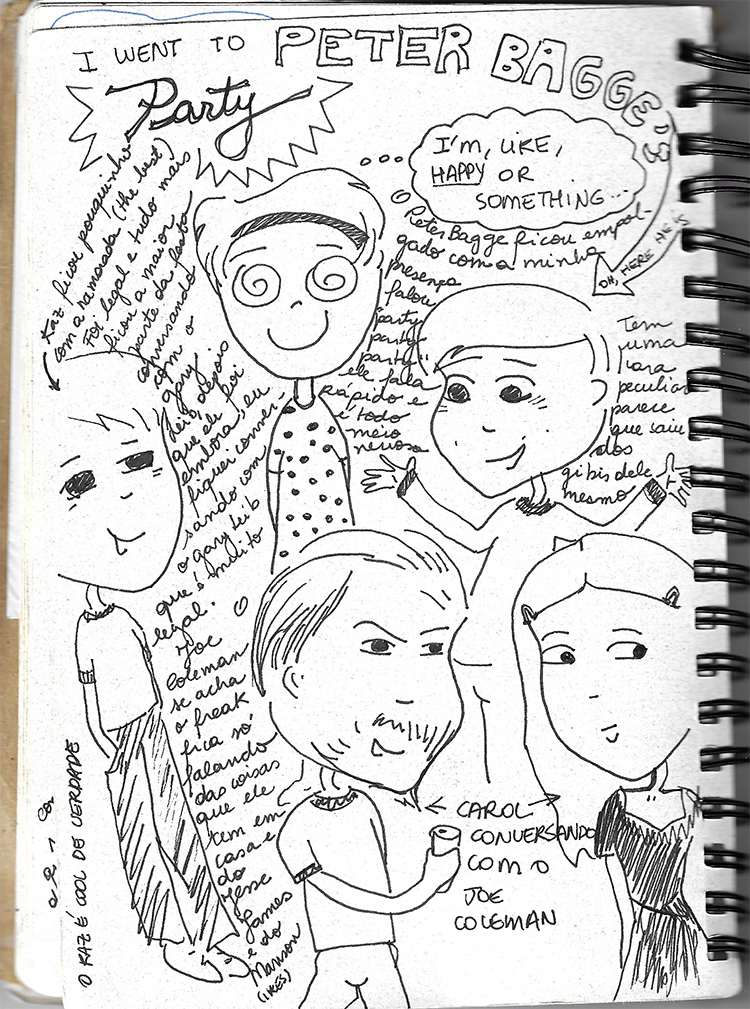 In 2017, exactly 20 years later, I met Bagge in Tacoma, where he now lives. He suggested a hip bar and café with five stars on Yelp, but it was too noisy for the recording, so we ended up going across the street and drinking cheap beer at a wonderful dive called Fergie’s On The Ave. An old-school hang with a back room filled with day drinkers and gambling machines is the most Bagge experience one could hope for (and every day in Milwaukee, which is why I live here). Bagge’s work is permeated by a genuine appreciation of the middle class and disdain for glamour or fads of any type. It is no wonder that his comics resonated so well with the lowbrow grunge aesthetics of the early ’90s.

Over the years there has been talk of other TV projects and movies based on Peter Bagge’s characters. I am partially glad that the mainstream hasn’t “stolen” him from comics yet. I take solace in the fact that there is something unbreakable about his vision, a stubborn cynicism and nostalgia that could be mistaken for conservatism, but is always filled with empathy and authenticity. You can’t take the Bagge out of Bagge, even if he eventually gets the showbiz millions he deserves.

The following is a sample of our conversation in Tacoma. You can read the whole interview HERE. 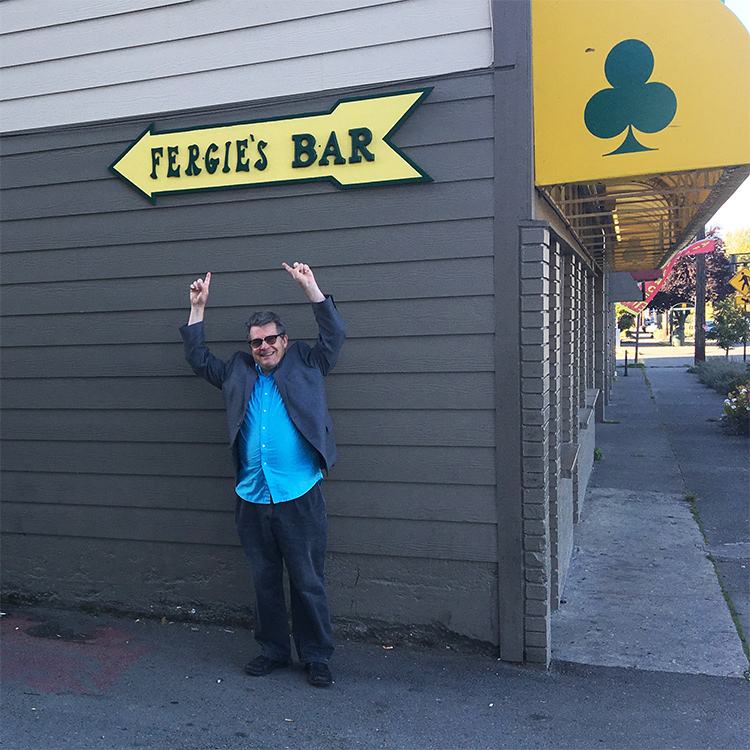 Peter Bagge: Well, this was slowing coming, starting roughly around the year 2000. I started doing more and more nonfiction work, journalistic comics for Reason magazine and other places. Then I also started doing very short biographical comics for various people. It started out as little one-page vignettes about scientists from the past or early American politicians. The subject matter interested me, but I was also trying to get a laugh out of it. I started doing longer biographical pieces, until it reached a point that I thought I could do a full-length biographical comic. It was something I wanted to do, or wanted to try.

CS: But why did you decide to concentrate on women?

PB: For various reasons, I became very interested in women writers, artists, and activists from a specific time period, between the two World Wars. There were certain similarities and a lot of things about them that I found incredibly inspiring. Mainly how independent they were. This is like a full generation before the ’60s, and they lived such fiercely independent lives. The work they did was very much on their own terms. Also, when I read about the lives of these women, not surprisingly, I found that they led very adventurous, crazy, insane lives. This was like something you could draw, as opposed to somebody just typing page after page. They did stuff! So I pitched the idea of doing a series on them to Chris Oliveros [then editor at Drawn & Quarterly]. I had several subjects in mind and for various reasons we picked [Margaret] Sanger first.

PB: There was so little of that. I remember a lot of people were worried on my behalf that there’d be a big backlash. I wasn’t even aware of it until somebody called me and told me that there were some people complaining on Twitter. I had to look for it, and they weren’t addressing me directly. Nobody who had an issue with me being a white guy, writing about a black woman, nobody brought that up with me directly. There was a little bit of noise about it. It was really stupid. I think one of the first people who complained said, “Why was a white man assigned this job?” Like I was hired, like somebody called me up and asked me to do it. I was like, “I wasn’t assigned.” It was so difficult doing it, actually.

PB: It was while I was working on that book that I reached a point where I pretty much had no choice but to sell my house in Seattle and move to Tacoma. I couldn’t afford the mortgage on my house anymore. I’m glad I made that move because now I don’t have a mortgage, I’m totally out of debt. I wouldn’t have made that move if I wasn’t knee deep in this book and not making any money. [laughs] I had almost no income. I was like, “Geez, if there’s a woman of color who also wants to lose her house…” Anyway, most people who wrote about the book liked it. There were few complaints.

CS: Will you eventually come back to the characters in Hate! or are you done with them?

PB: For 10 years I did the annuals. Then they kept selling worse and worse. There just wasn’t interest in Buddy Bradley being this old crazy looking guy, who owns a dump, and who’s married to a crazy… People just didn’t care anymore. Not enough people cared for me to keep doing it. I was just like, “Ah, forget it. That’s enough.” 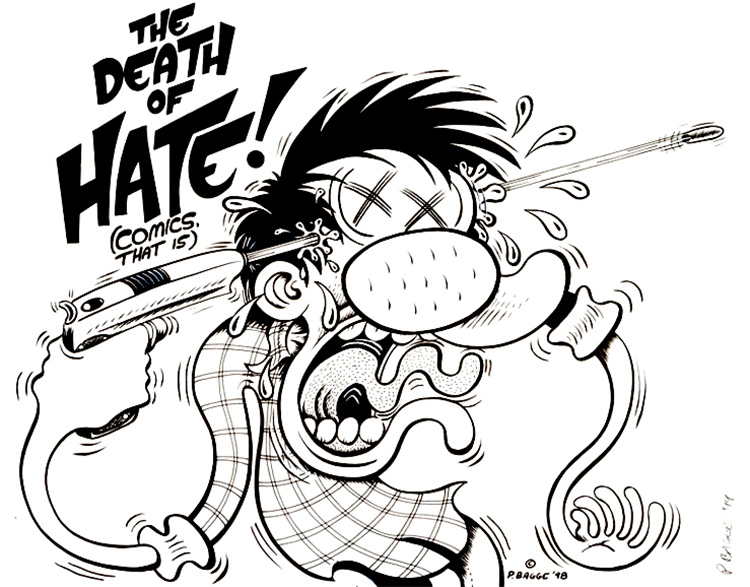 CS: Were you personally curious about what would happen to the characters?

PB: No, I would keep doing it if I was. It’s just that nobody was reading it, nobody cared…I shouldn’t say “nobody,” but fewer and fewer people. There were too many other things that I also wanted to do, where at least there was more money attached. I’ve done three graphic novels, two for Dark Horse and one for Vertigo. Apocalypse Nerd might become a TV show [laughs], a cartoon show.

CS: One thing I remember from talking to cartoonists 20 years ago is that everybody seemed to be waiting for their big break. Everybody seemed to be in the cusp of it. Then I got to Daniel Clowes and he said, “Thank God we’re not famous. It would suck. Can you imagine if we were mainstream?”

PB: Really? He said that 20 years ago? That’s pretty funny. [laughs] It wasn’t the fame that attracted me, it was making a decent living, making a good living and being financially secure, because how is a cartoonist supposed to retire? [laughs] You want to be able to make enough to retire. There’s all of that. 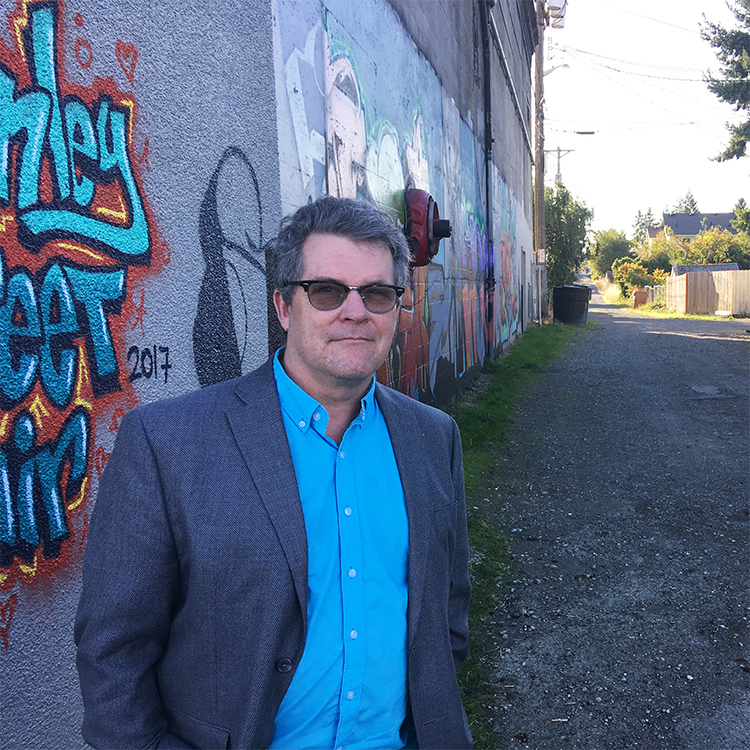