Milwaukee and sausages go together like…hmmm. Actually, nothing really goes together quite like the pairing of Milwaukee and sausages. For better or worse, tubed meat delicacies have been synonymous with our fair city alongside such other regional delights as beer, cheese, and hot ham and rolls. Even though Milwaukee’s culinary climate is now far more favorable and elevated than it was even 10 years ago, some of the region’s most renown foodstuffs have remained a beloved part of out collective diet.

Much to our delight, the almighty bratwurst—among other sausages—hasn’t gone out of style as the city’s dining options have expanded, evolved, and exponentially improved. In fact, the city’s sausage options have only gotten better and more abundant in recent years. On top of the ground and cased dreams that longtime Cream City sausage purveyors like Usinger’s and Klement’s have been selling for generations, restaurants like Vanguard, Louie’s Char Dogs, Milwaukee Brat House, and the Riley’s Good Dogs food truck are helping to modernize, popularize, and build upon this timeless meat treat.

A few weeks ago, Milwaukee’s sausage scene continued its ongoing Renaissance when WürstBar (1239 E. Brady St., 414-763-2180) opened in the heart of the lower east side. Before Brady Street businesses and patrons went all-in on Halloween festivities last Saturday, we stopped by the new bar and restaurant to enjoy “a Milwaukee-style spin on Berlin” for lunch. We weren’t disappointed.

The space: Being located on one of the city’s most vibrant, entertaining, and youthful causeways, WürstBar could have gone a few ways with its business model. They could have worked in direct opposition of the neighborhood and opened a stuffy, expensive, and unwelcoming Germanic joint built on the shaky foundation of fancy fare. They could have leaned into Brady Street’s proclivity for fun and indulgence geared toward a 20-something clientele and added a silly “sausage party” element to the neighborhood. Thankfully, the ownership group—which also has ties to the Downtown and Shorewood Milwaukee Brat House locations, as well as Brady Street bar Jack’s American Pub—created a place that ably and skillfully lands somewhere between those two divergent themes to forge something customers of all ages can get behind.

There are a few tables situated along the business’ eastern wall, and a few more tables outside on a patio. The majority of seating, however, is available along the long, winding bar. The decor is minimal at this point, but there are a few TVs mounted on walls throughout the restaurant and some video poker machines to help kill some time. Last Saturday afternoon, we took a spot at the bar, enjoyed the rare Badgers lead on a nearby television, and placed an order. 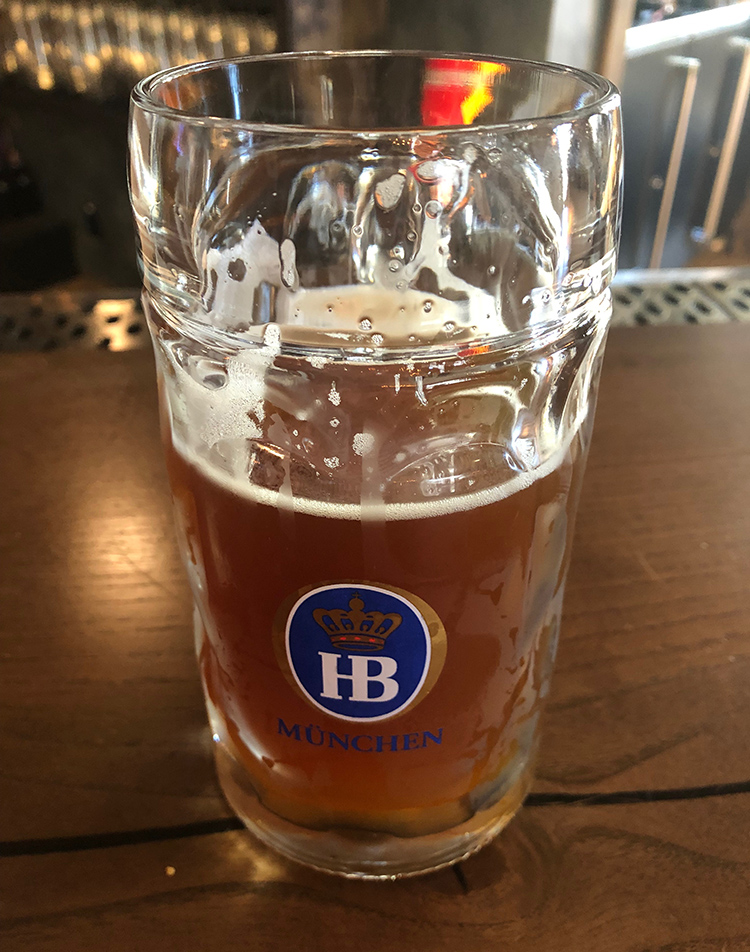 Milwaukee Record’s food: Once again, WürstBar strikes a good balance between the German restaurant concept and accessible Brady Street bar, and that shows in its beer selection. The draft lines either feature imported Oktoberfest options, ciders, and dunkels or selections from local breweries like Lakefront, Third Space, and New Glarus. After we placed our food order, we sipped on a half-liter mug of Weihenstephaner Dunkel ($7) brought to us by an upbeat and friendly bartender/server dressed up as a mummy for the Halloween holiday. 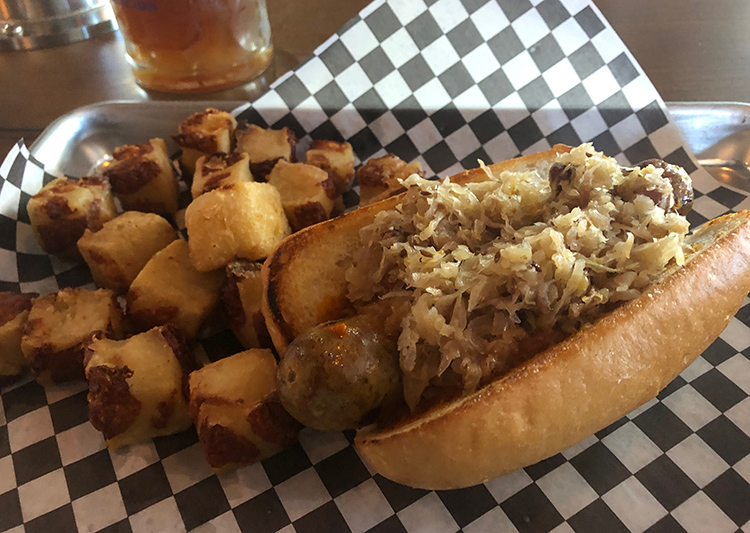 Within a span of maybe 10 minutes, our order came out. While we love a good Döner Kebab and were happy to see them on the menu, we wanted to focus on the eponymous Würst during this maiden voyage. Of the five sausages available, the Curry seemed the most intriguing. The sausage, apparently made specifically for WürstBar by Bunzel’s Meat Market, included a generous pile of Usinger’s Apple Bacon sauerkraut. Both were set atop a buttered and grilled bun made by nearby Peter Sciortino Bakery, which helped bring the already hearty and flavorful combination of tastes to the next level. The $10.95 sausage combos come with a side option.

Instead of opting for a complementary side of fries, potato salad, cucumber salad, of spatzle, we decided to upgrade to an order of cheese curds with a side of white sauce for an additional $4. Boy, we’re glad we did. The cubed curds were substantially beer-battered, which a light sourness that perfectly countered the creamy and savory melted cheddar center. Between the beer, sausage, and curds, we left satisfied. However, we spotted someone with Schnitzel Tenders (breaded strips of pork) on the way out, making us instantly regret not reading the menu more closely before ordering. Between that enticing option, the availability of Döner Kebabs, good locally-produced sausages, a solid beer selection, and great service in an accessible setting, we will be back at some point.

The verdict: When you’re on the East Side with a hankering for German pub fare that has a distinctly Milwaukee twist, you could do far worse than WürstBar. 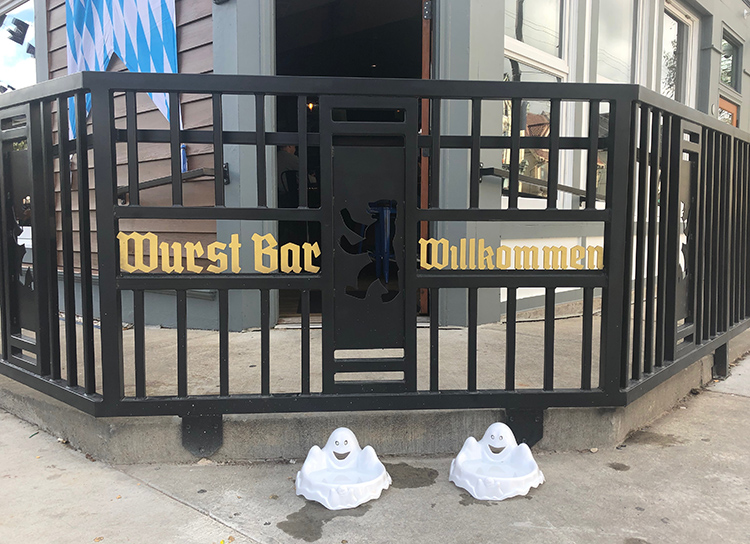