Stop us if you’ve heard this one before. A small brewing operation begins in Wisconsin and quickly makes a name for itself among local hopheads. The output (which is contract brewed at a brewery in Green Bay) increases to a point where the owners make plans to open a full-fledged brewery of their own in Milwaukee. Along the way, it’s determined the brewery cannot open in the city due to antiquated “tied house” laws that prohibit a brewery owner from also holding a retail liquor license in another location. The young brewery ultimately decides to move operations to Chicago. Recognizing the potential for a huge industrial hit, Wisconsin revises this law, which allows the brewery to open a tap room in the city where this strange story all began. It’s a tale as old as time, really.

Okay, maybe it’s not so common. However, that’s exactly what happened to Like Minds Brewing Company. The venture—which is co-owned by Sanford owner Justin Aprahamian, hence the scenario—has cleared a litany of legal hurdles and logistical nightmares since last summer, but the brewery is now thriving in its Chicago site. Now, some 14 months since Wisconsin essentially forced them out, the 19th century legislation has been reinterpreted, and this small beleaguered brewery has been permitted to open a brewpub in its home state. In early October, Like Minds Milwaukee (823 E. Hamilton St., 414-239-8587) marked the triumphant return of a brewery that, at least in the eyes of Johnny Law, was never really here to begin with. Has a year in Chicago changed the suds and sours Milwaukee had grown so fond of? And will a brewery that already has a presence in so many restaurants benefit from the ability to dictate its own food accompaniment?


The space: If you recall what previous tenant The Hamilton was like, you’re probably lying. Nobody went to The Hamilton. The select few who had will find the space virtually unrecognizable. Sure, the cold brick exterior might suggest “office space for a start-up,” but inside totes a subtle dash of class. The vast space has been essentially halved, with the rear that was once relied upon for banquet space walled off and dedicated to brewing. Though cut in twain, the front section still serves as a spacious dining room, with roughly 20 tables capable of accommodating between two and eight patrons. The whitewashed walls are fairly vacant, apart from concert posters and framed illustrations of Like Minds label art. The echo-y room will find an identity in time, but seems happy to rely on the massive skylight in the center of the room to provide ambiance at the moment. There’s a shimmering new concrete L-shaped bar that runs almost the entirety of on wall, which hosts more than a dozen stools and almost as many taps (currently including a couple cameos from Good City and Central Waters brews). 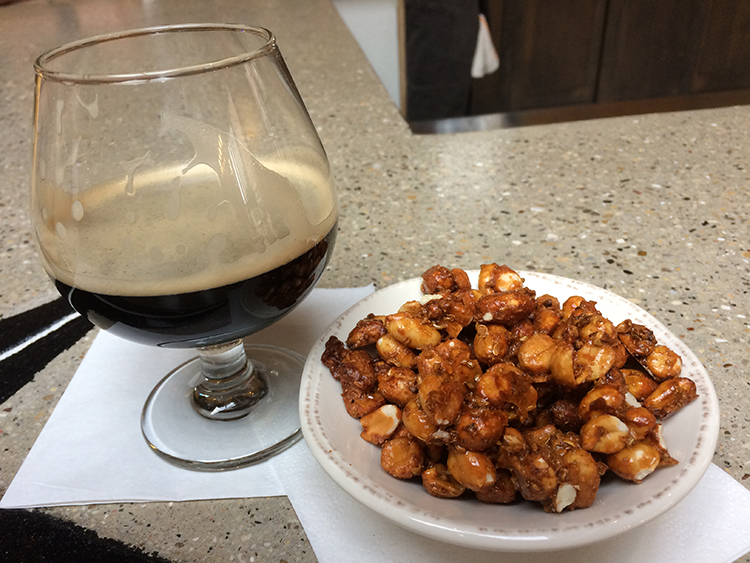 Milwaukee Record‘s food/drinks: We began out tap traversing with a snifter of Nighthawks ($6). The nitro oatmeal stout instantly made the presence of Metric Coffee Roasters’ beans known with an unmistakable aroma of java. Scent aside, the bitterness quickly subsided and gave way to a surprisingly sweet and smooth 7.2 ABV stout, and our favorite beer of our visit by a wide margin. Between sips, we chomped on a bowl of Spiced Nuts ($3), a complex combination of smoked peanuts, with a flavor profile that rapidly—though expertly—careened from the malt-conveyed sweetness to the slight spice of coriander, and finally, the loud presence of fennel that brought momentary visions of bratwursts dancing in our head. To be clear, the nuts had no business being this close to our Nighthawks, but both deserve to be enjoyed over the course of a visit. 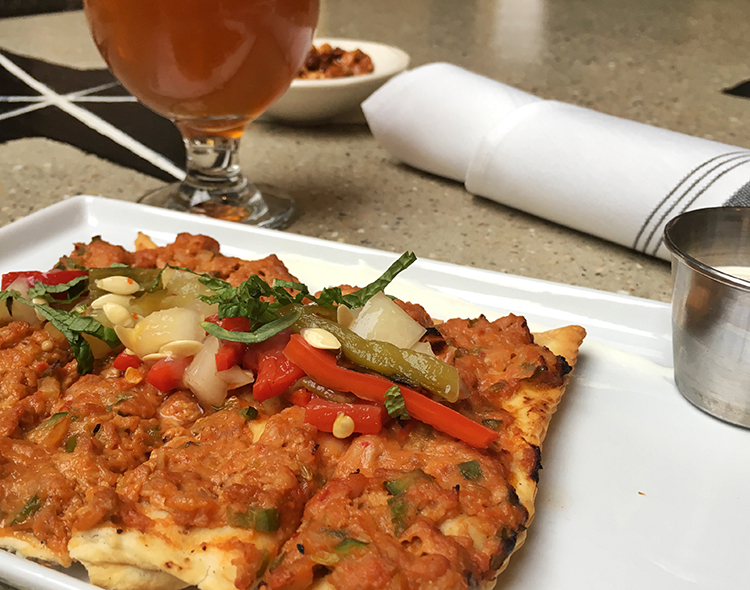 We continued our descent down both menus and found ourselves before a glass of Like Minds’ resident IPA, Archemedies ($6). Apparently made with the brewery’s in-house Brettanomyces yeast strain, it also lacked the bitterness of many of its pale allies, but was a nice down-the-middle beer that could compliment most anything on the brewpub’s continent-hopping menu—from the corn dog ($4) to the Philippine Noodles ($12), and even the sirloin ($20). We resisted the Butterburger ($12) in favor of the decidedly more sharable Lahmahjoun Armenian Pizza ($9), a busy plate of quartered flatbread that was smeared with small bits of spiced lamb, fresh mint, and an assortment of pickles and peppers. We found it to be watery and thin initially, but a spoonful of yogurt tethered our vegetables to the “pizza” and tamped down the tang of pickled vegetables to tie it all together as an enjoyable appetizer. 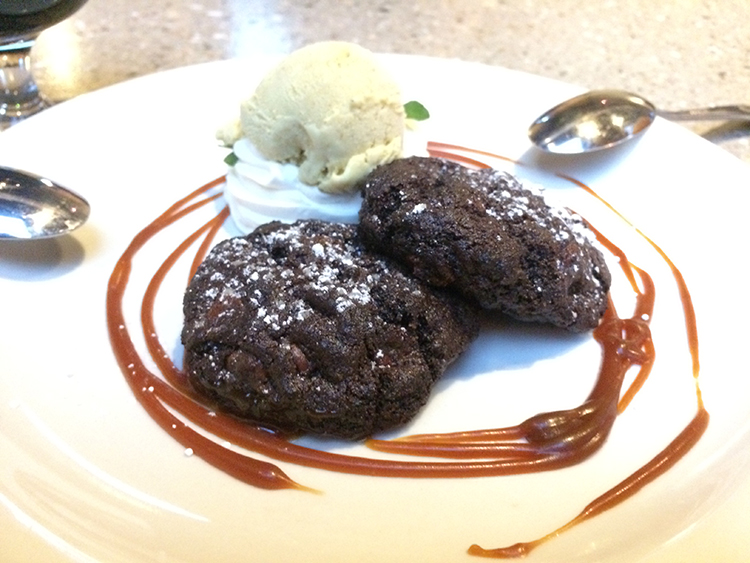 Finally, we brought our meal to its conclusion with a Noma Cookie ($8). Here, two unthinkably moist and gooey double chocolate cookies rest against a dollop of pistachio ice cream. A drizzling of caramel orbits the unhealthy trinity. The dessert was every bit as good as it looks, but our glass of Exiled ($5) clashed with the unrelenting sweetness of the cookies with its hollow and—stay with us here—faintly floral body. No matter. Quickly noting our first misstep of the evening, we ordered another Nighthawks, and all was right with the world again.

The verdict: Admittedly, the beer doesn’t stand particularly strong on its own when compared to some local newcomers who have cropped up during the brewery’s absence. Yet when conjoined with a whimsical, weaving, and adventurous menu that’s served in a comfy space hidden on a residential block of the lower East Side, it just all sort of comes together. It wasn’t pretty and it surely wasn’t easy, but Like Minds fought the law and won. As a result, so did Milwaukee.