During its 30-year run, Lakefront Brewery has earned a reputation as one of Wisconsin’s oldest, largest, and most renowned craft breweries. Though the upstart operation has become a must-visit tourist destination, its distribution now extends well beyond city limits—not to mention across state lines and international borders—and its trophy case is quickly filling up with industry awards, Lakefront hasn’t forgotten where it came from. Not only has the burgeoning brewery made sure to remember its roots, they have made a point to acknowledge the hard work of the employees who’ve helped make Lakefront Brewery what it is today.

The most public display of that appreciation is Lakefront’s “My Turn” series, a quarterly occurrence in which the brewery produces, bottles, and distributes a new beer that’s devoted to and created in collaboration with an employee. Once someone is hired full-time, their name goes on the My Turn list. It doesn’t matter if that employee is on the brewery floor, in the office, working at the gift shop, or distributing. If they’re still employed by the time their turn comes, their beer will be made. It’s a unique practice that’s virtually (if not completely) unheard of in the world of brewing.

Last week, the 23rd installment hit store shelves and it will soon reach tap lines in the region, starting with Thursday’s official My Turn release event at The Garage. According to the beer’s description, the “classic, German-style beer pours deep gold with a loose white head, releasing moderate woody and peppery aromas from late-boil Spalter, Czech Saaz, and Perle hop additions.” Yet the Dortmunder-style lager’s ingredients extend well beyond the barley, hops, malt, and other flavoring additives present in the My Turn Dylan. In fact, the most important part of Lakefront’s newest beer is Dylan himself.

Dylan Mazurkiewicz, 26, is a Tour Manager at Lakefront Brewery. The Green Bay native moved here at with $700 to his name at the age of 19. Following a couple uncertain years working at CapTel “like everybody else who moves to Milwaukee without a plan” and a sandwich shop, Mazurkiewicz was hired part-time at the gift shop in late 2012. In early 2013, he was promoted to his present position, which came with full-time hours and his name added to the bottom of the My Turn list.

“I immediately asked when mine was and they said 2022,” Mazurkiewicz says. “I was like ‘Jesus, that’s never going to happen!’”

The My Turn process is based entirely on full-time seniority. Though each year’s order might be shifted slightly to better pair the employee’s desired style with the season of its release (because who wants a Baltic Porter in July?), employees generally have a good idea when their day will come. As was the case with Dylan, a staffer’s road to glory can be shortened through those higher on the list leaving their job or reducing their hours to part-time.

In 2016, Mazurkiewicz learned he would officially have his turn in 2017, and a process that took close to 18 months from beginning to end was set into motion. First, he has to connect with Lakefront’s Brewmaster to discuss possible styles, ingredients, and “flavor opportunities” in the beer. “I changed my style about three times,” Mazurkiewicz says. His first two ideas were a gluten-free IPA and a rye ale. Eventually, he landed on a Dortmunder-style lager because he felt the light, crispy taste would be something “people could drink a lot of” in summer.

From there, Mazurkiewicz was asked to fill out a questionnaire about his hobbies, loves, little-known personal facts, non-brewery aspirations, and the first thing he’d grab if his house was on fire. That information was condensed into the bio that will appear on the packaging. Mazurkiewicz—who sings in a hardcore band called Garden Home (formerly called Hodari)—made sure to mention his love of music, spending time his “lovely lady” and their rescued pitbull, camping with his father, and his affinity for pizza. 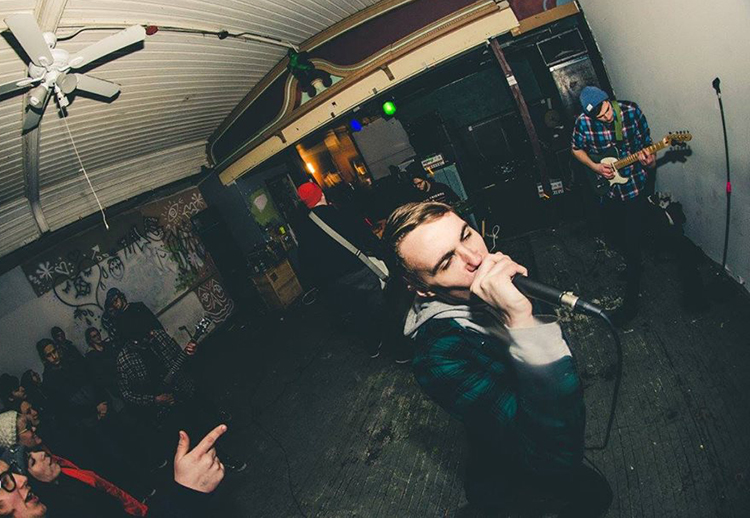 After the bio and ingredients were confirmed by both Lakefront and Mazurkiewicz, the process moved to packaging. My Turn honorees get a say in the color of their beer’s packaging. As a nod to his Green Bay upbringing, My Turn Dylan has green and gold box and bottle art, which had surprisingly never been done in the previous 22 iterations and is not trademarked by the Packers. Of course, the artwork and labeling had to be approved by the Tax & Trade Bureau, who ensure terms like “organic” are used properly, ingredients are correctly identified (ex: “vanilla extract” instead of “vanilla” or  “hazelnut flavoring” instead of “hazelnut”), and trademarks aren’t infringed upon.

Finally, once ingredients were ordered and both the packaging and ad copy were finalized and approved, My Turn Dylan was brewed at the end of April. Despite not having any personal brewing experience, Mazurkiewicz was allowed to take part in creating his beer. 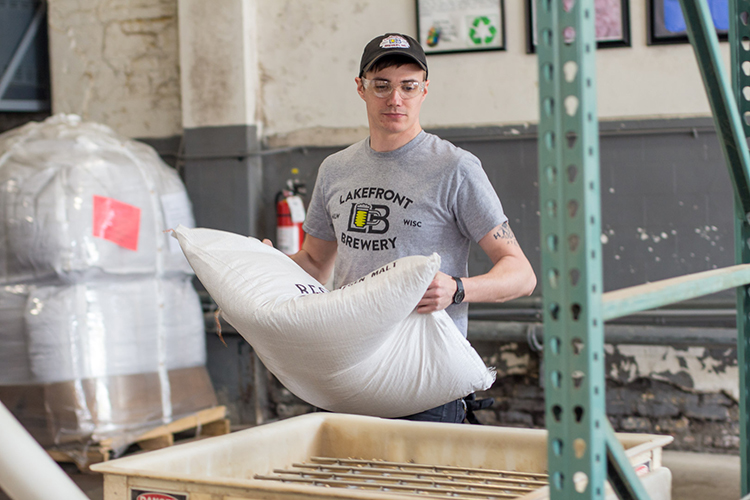 “It’s fun, man. I got to dump all the grains and I got to portion out my hops. That was all super cool,” Mazurkiewicz says. “I had this weird sense of paranoia. I didn’t want to fuck this up. I’ve waited so long and it’s come so far, so I don’t want to waste this opportunity.”

Unfortunately, he needed to wait more than a month to know if he did. Late last month, My Turn Dylan was put into green and gold-labeled bottles and into Lakefront kegs to be sent to bars and retailers spread throughout the city, as well as a variety of places in Madison, Chicago, and, yes, even his native Green Bay. Keeping with the pattern, the beer’s namesake was there on bottling day.

“That was just a trip. I couldn’t stop smiling the whole time,” Mazurkiewicz says. “The My Turn days are fun for everybody because we get to have a beer we don’t normally get to have. A lot of the guys were coming up to me and hyping me up about it. It’s a fun day for everyone.”

Mazurkiewicz grabbed the first six off the line to take home. He calls the experience “a dream come true” and he plans to enjoy his beer at bars and in the company of family and friends all summer long. To most, Thursday’s release is the beginning of My Turn Dylan’s limited availability on Lakefront tap lines. To one Lakefront employee, it marks the end of a process that required more than four years of waiting, over a year of planning, and months of execution.

Come autumn, the series will continue and the turn will belong to someone else. Even once the last drop of My Turn Dylan is gone, the 26-year-old hardcore singer who moved to Milwaukee in 2011 without a plan won’t soon forget that the city’s biggest craft brewery once let him represent the company with a beer bearing his name.

“It’s our tenure,” Mazurkiewicz says. “Instead of getting a gold pocket watch or a telescope, we get to have a beer with our name on it.” 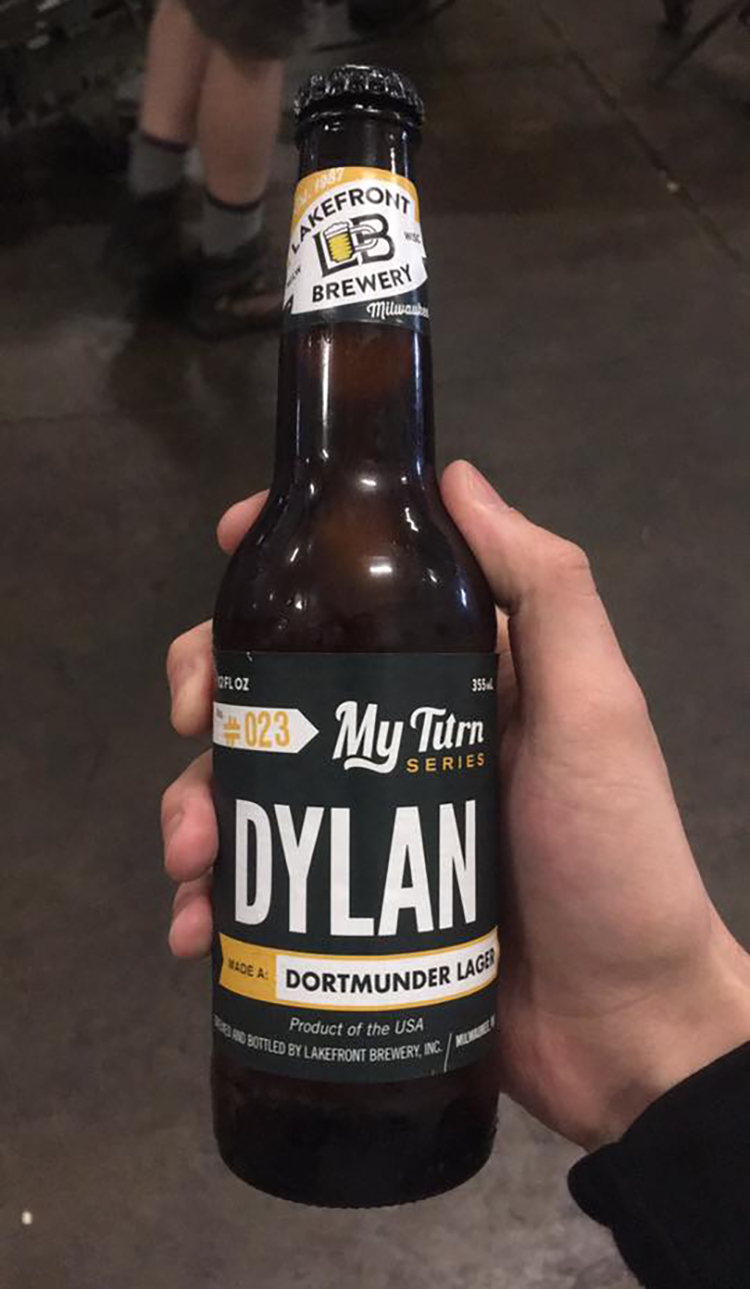