It’s been just over three weeks since Wisconsinites were—incredibly, unbelievably—forced to vote in person in the 2020 Spring Primary. You know, during a global pandemic. In Milwaukee, there were only five voting sites open on Election Day, leading to ridiculously long lines and thousands of people risking their health and the health of others just to exercise their right to vote. More than 50 positive cases of COVID-19 have been linked to the election. Results aside, the election was a disaster, and a complete failure of leadership.

But that was three weeks ago, so who cares, right? Well, one Milwaukee arts group hasn’t forgotten, and they’re venting their anger in a very public way: on the windows of a building near a busy Walker’s Point intersection, on the corner of 1st St. and Pittsburgh Ave. 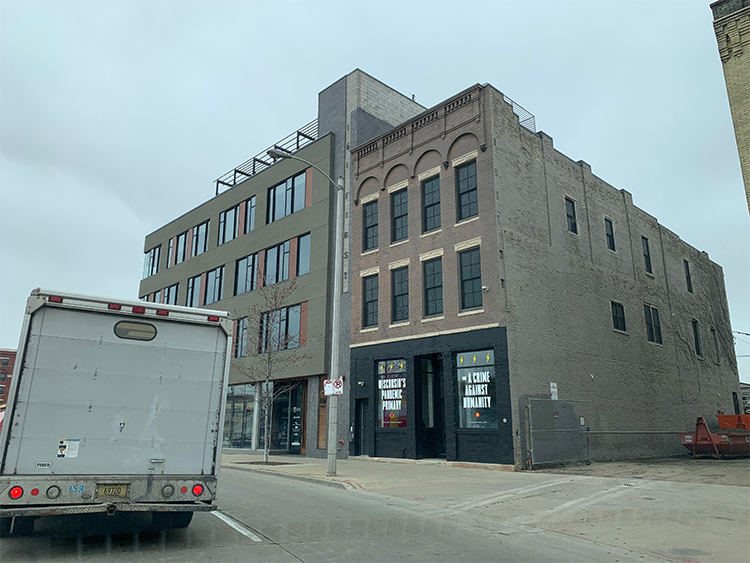 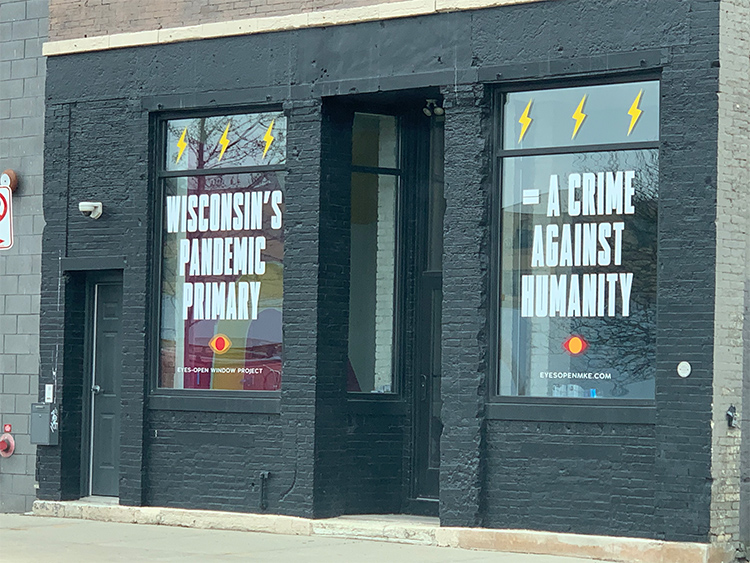 The window display is the work of BlackPaint Studios, which occupies the building. BlackPaint describes itself as a “a women-owned creative advocacy agency that blends our unique experience in both traditional advertising and grassroots art activism to create eye-opening campaigns for organizations and causes we believe in.” As for this eye-opening campaign, this is what BlackPaint has to say:

We all know what happened. On April 7th, Wisconsin’s leaders decided to hold an in-person election during an infectious disease pandemic rather than postpone it, like most other states chose to do.

That decision put lives at risk, especially the lives of black and brown citizens in Milwaukee who’ve been disproportionately impacted by the virus. (Because yes, the result of hundreds of years of racism is poorer health and economic outcomes that make people more vulnerable to this kind of thing.)

Watching our neighbors and our own family members standing in those long lines was sickening. It reminded us of our state’s long history of trying to make voting harder, which had already been working to discourage people of color and younger, poorer voters from coming out for elections. It also reminded us of how willing our officials are to play politics with our lives.

Bottom line: Wisconsin’s primary election was not only a blatant act of voter suppression, it was a crime against humanity.

Why does it matter? BlackPaint explains:

It matters because there are more elections and more COVID cases headed our way. Soon.

It matters because every American should be able to participate in our democracy without risking their lives. Or jumping through hoops.

In a recent op-ed for Teen Vogue, young Black Milwaukee organizers pointed out that voting in Wisconsin was “already exhausting” before the pandemic. They explained how, “During a normal year, voter purges, absentee voting rules, and the underlying racism of our city stack up to be an obstacle course for anyone trying to vote.”

Voting by mail is the safest option for our upcoming statewide elections in August and November. It’s also a method that’s been shown to increase voter participation under normal circumstances. (Oh. And. According to the New York Times, “There’s little evidence that vote-by-mail leads to widespread fraud or favors Democrats. Mr. Trump, himself, voted by mail in Florida’s primary election last month and the 2018 midterms.”)

It’s time. This moment demands a more equitable and accessible electoral system, starting with expansion of absentee voting in the states for spring and summer elections and eventually with the creation of a national vote-by-mail system.

What can you do in the face of all of this? BlackPaint has some suggestions:

1. Donate to LIT and follow them on IG, Twitter and Facebook. LIT (Leaders Igniting Transformation) is a Milwaukee-based, youth led non-profit that’s organizing young black and brown Wisconsinites to build independent political power for social, racial and economic justice. They created the message in the windows. And they led the fight to delay April’s election, just like they lead the fight on voter a lot of issues shaping Wisconsin’s future — including voter suppression. So fund their important work if you can, listen closely to what they say and follow their fearless lead.

2. Join When We All Vote in taking their voting principles pledge that calls on leaders across the country to expand vote-by-mail in EVERY state. When We All Vote is a non-profit, nonpartisan organization co-chaired by Michelle Obama and Janelle Monae that’s been working to increase participation in elections since 2018.

3. Call or email your lawmakers and let them know you support expanding access to vote-by-mail.

4. Request an absentee ballot for Wisconsin’s next statewide election — the partisan primary on August 11, 2020 — so that you don’t have to vote in-person. If you’re a registered voter living in Milwaukee, you’ll now automatically get your application in the mail thanks to the SafeVote program that the city’s common council just created. So look out for it and mail it back.

5. If you have creative talents, use them to continue to make noise about this. Art has a way of reaching people in a way no other form of communication can.

So there you go. BlackPaint says they’ll put up a new window display every few months. “Whatever the moment calls for.”