On Monday, Gov. Tony Evers signed an emergency order suspending in-person voting for tomorrow’s Spring Election, moving it to June 9. No longer would Wisconsinites have to risk their health and the health of others by voting at an actual polling place. You know, because of that whole global pandemic thing. Sounds good!

So here’s the deal: If you’re a City of Milwaukee resident and you currently have an absentee ballot, you can still return it to one of five drop boxes throughout the city by April 7. Those drop boxes are:

If you’re using the postal service, your ballot must be postmarked by 8 p.m. on April 7.

If you don’t have an absentee ballot (and/or you requested one but it never showed up), you’ll have to vote at a polling place on Tuesday. If you want to protect your health and the health of others and still vote, you’re out of luck. Sorry. 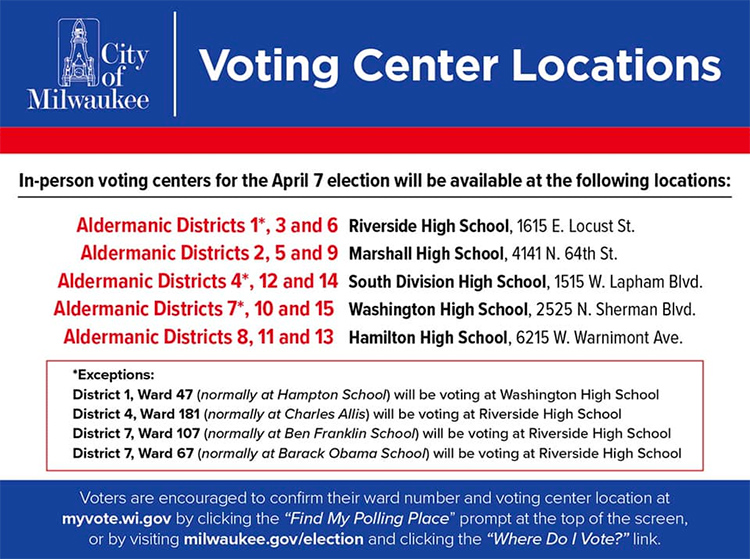 “The governor does not have constitutional or statutory authority to modify, suspend or otherwise alter the statutes,” Republicans said today. “Nor does the governor have the constitutional or statutory authority to set the time, place and manner of elections. That authority belongs to the Legislature…Moreover, such sweeping changes to an election made just before the election is set to begin will undoubtedly cause voter confusion and call into question the integrity of the electoral process.”

“Today, I signed an executive order suspending in-person voting for tomorrow’s election,” Evers said in happier times—a.k.a. today at noon. “Frankly, there’s no good answer to this problem—I wish it were easy. I have been asking everyone to do their part to help keep our families, our neighbors, and our communities safe, and I had hoped that the Legislature would do its part—just as the rest of us are—to help keep people healthy and safe.”

In other news, Republican lawmakers want to reopen some golf courses.

Here’s the full statement from Vos and Fitzgerald:

“In a crisis, people look for certainty. In elections during uncertain times, it’s important that no one questions the process. That’s why it’s so disappointing that Governor Evers has flip-flopped on the very question that we have been discussing over the past month.

“If the governor had legitimate concerns, we could have come to a bipartisan solution weeks ago. This discussion would have happened long before today. The only bipartisan discussion we’ve had was to ensure the election would continue safely and to maximize the opportunity to vote absentee.

“Unfortunately, it’s this type of feckless leadership Wisconsin has come to expect of the governor in the face of this crisis. Instead of remaining strong to ensure our representative democracy continues, he caves under political pressures from national liberal special interest groups.

“Hundreds of thousands of workers are going to their jobs every day, serving in essential roles in our society. There’s no question that an election is just as important as getting take-out food.

“Our Republic must continue to function, and the many local government positions on the ballot must be filled so that municipalities can swiftly respond to the crisis at hand. We continue to support what Governor Evers has supported for weeks: the election should continue as planned on Tuesday.”