The following article originally appeared in the September edition of Colectivo Coffee‘s “Off The Record” print-only periodical/crossword puzzle. You can pick up “Off The Record” free of charge at all 13 Milwaukee-area locations.

Yes, My First Cup of Coffee Ever ™ was far from an earth-shattering event, but it was a big deal to me. What had convinced me to finally, belatedly, randomly enter this caffeinated world? Nothing, really. It was like that scene in UHF where Weird Al says, “I need a drink.” “You don’t drink,” replies his friend. Says Al, “Yeah, but I’ve been meaning to start.” (Fun fact: Ninety-two percent of all life experiences can be explained via UHF.)

Not that I hadn’t tried coffee before. Back in college, a girl and I pulled an all-nighter at Ma Fischer’s so we could study for a film history exam. I remember nursing a single cup of coffee for about six hours that night/morning. I also remember the girl—whom I had a hopeless crush on—slowly revealed that her favorite movies were Bible epics, that her family used to live on some kind of Jonestown-esque commune, and would I be interested in reading some pamphlets she had brought along? Needless to say, the following 18 months in northwestern Guyana were terrific, and I still keep in touch with my deprogrammer today.

My next coffee close encounter happened just a few years ago, on November 1, 2016. (I’ll explain why I’m so good with dates in a minute.) You see, I had a crackpot idea for a Milwaukee Record article where I, a coffee virgin, would try a bunch of locally brewed blends and rank them all or something. Hilarity and every coffee joint in town calling for my head when I inevitably wrote that they all tasted like hot water would ensue. Here’s my journal entry from that day:

Up early. Drop Sallie and Madeline off. Drive around Bay View. Get breakfast at Colectivo. Lock keys in car. Call Tyler. He picks me up, drives to Sallie’s work. Pick up keys after long wait. Drive to office. Meeting. Josh drops in. Tyler drops me back off at Colectivo. Get a coffee. Drive to Anodyne for another coffee. Abandon coffee idea.

Yes, I keep a delightfully mundane daily journal. Yes, I haven’t missed a day in more than six years. And yes, the above entry is pretty typical. Thanks for picking me up that day, Tyler.

So how has my past year-plus of real-deal coffee drinking been going? Well, mistakes have been made. Sugar and cream seemed like a good idea in the beginning, but after a disastrous three-sugar incident at a fast-food restaurant that shall remain nameless (McDonald’s), I’ve stuck to black coffee. One morning at work, I downed an entire pot before 10 a.m. By 10:15 a.m. I had written 8,000 words on the Milwaukee Bridge War of 1845 and alphabetized our break room’s extensive library of Sega Genesis games. In case you were wondering, Ecco The Dolphin is still impossible.

As for what was keeping me away for so many years, I’ve narrowed it down to two possibilities:

1. Decades of “I’ll have a triple mocha grande one-pump latte espresso with soy vanilla foam” jokes convinced me that ordering coffee was akin to differential calculus. Not true! Turns out you can just walk up to someone (preferably someone working at a coffee shop) and say, “I’ll have a large coffee, please,” and they’ll totally give you one!

2. The process of making coffee at home or at the office always seemed overly complicated. What’s the deal with filters? How much coffee and water are you supposed to use? Wait, there are ratios involved? Eventually my wife explained that you just dump in one tablespoon of coffee for every cup of water. Or is that one scoop—which equals two tablespoons—for every cup? Whatever, it seems to be working. (Note: If this is completely wrong, blame my wife.)

Oh, and I enjoy not drinking two Mountain Dews every morning, which was getting kind of gross.

* The Colectivo on Prospect

Here’s the answer key for the American Values Club Crossword Puzzle from the September edition of “Off The Record.” 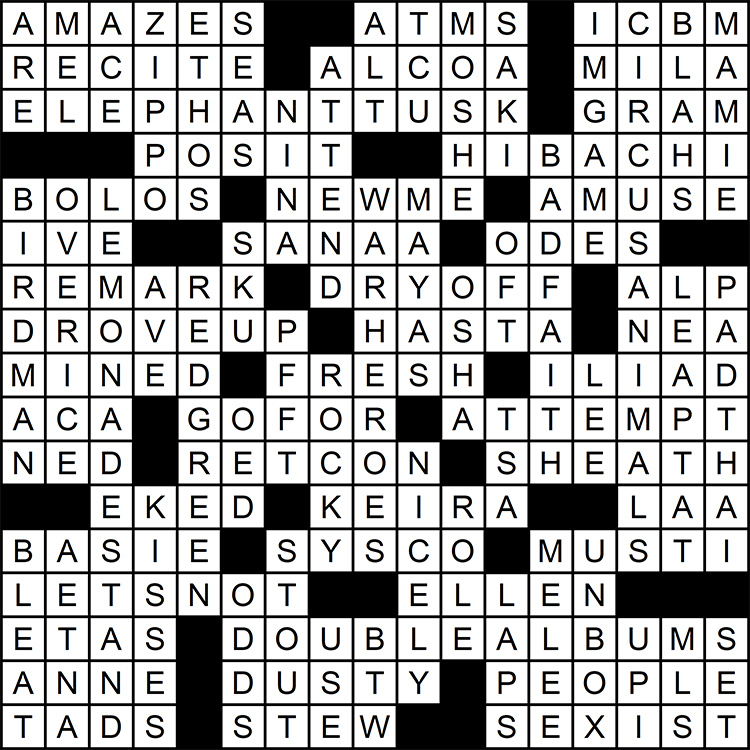