Last week, we embarked on an epic taste test: Who has the best Big Boy-inspired burger—AJ Bombers, Coach’s, or McDonald’s? The test was inspired by AJ Bombers’ limited-time tribute to the classic double-patty, triple-bun, secret sauce-slathered burger. But it looks like we needn’t have rushed. Today, AJ Bombers has announced it will keep its Big Boy burger—now dubbed “The Tribute”—on its menu all summer long.

“We knew Milwaukeeans loved Marc’s Big Boy and its tremendous burger, and it’s been exciting to bring those flavors to a new generation of Big Boy fans,” says David Marcus, CEO of Marcus Investments, the parent company of AJ Bombers, in a press release. “We’ve seen people come in repeatedly (some even multiple times a day), and we sold almost 1,500 burgers in just one week. AJ Bombers has always been a restaurant that proudly gives its customers what they’re asking for…and they’ve certainly spoken!”

And for the record, it was a close tie between AJ Bombers and Coach’s. Here’s what we said about the newly dubbed Tribute:

Appearance: This is a fine looking burger, a work of art that towers high into space and practically begs to be held aloft by Big Boy himself. The patties are done to perfection, and the sesame seed bun is fluffy and inviting. Oh hell yes.

Taste: This is a fine tasting burger, too. Per AJ Bombers’ usual fare, the patties are absolutely terrific. The lettuce and the secret sauce aren’t too overpowering, which is good news for those of us who can’t quite handle an uncut Big Boy high. This is a damn good burger. Get it before it disappears April 14! 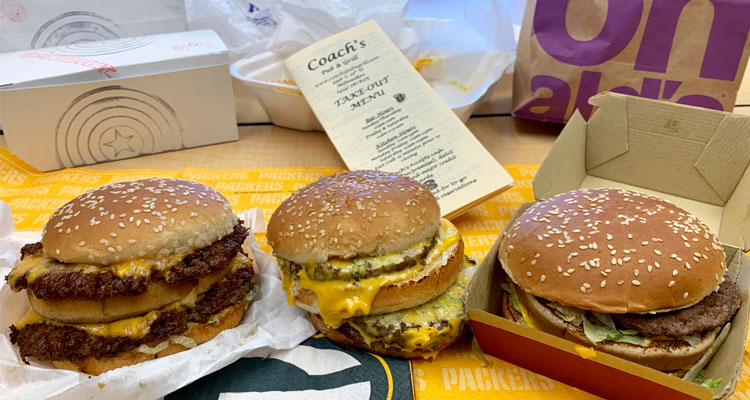