An NCAA March Madness bracket was taped to the right of the kitchen door at C & C’s Mosquito Inn (3208 4 Mile Rd., 262-583-4378), but I had my focus to the door’s left, where a fish fry bracket was taped. Each time an order came in, a worker made a tally mark for cod ($12), perch ($13), walleye ($18), shrimp ($12), or the combo ($25). Would the #1 seed cod be victorious as expected, or would there be enough hungry folks on the fourth-last Friday of Lent for a combo upset? I didn’t place any bets, but I tilted the scales towards the combo with my order, and I picked potato pancakes over french fries and parsley buttered potatoes for my side. Old Fashioneds and clam chowder ($6) weren’t part of the tournament, but I ordered them too. 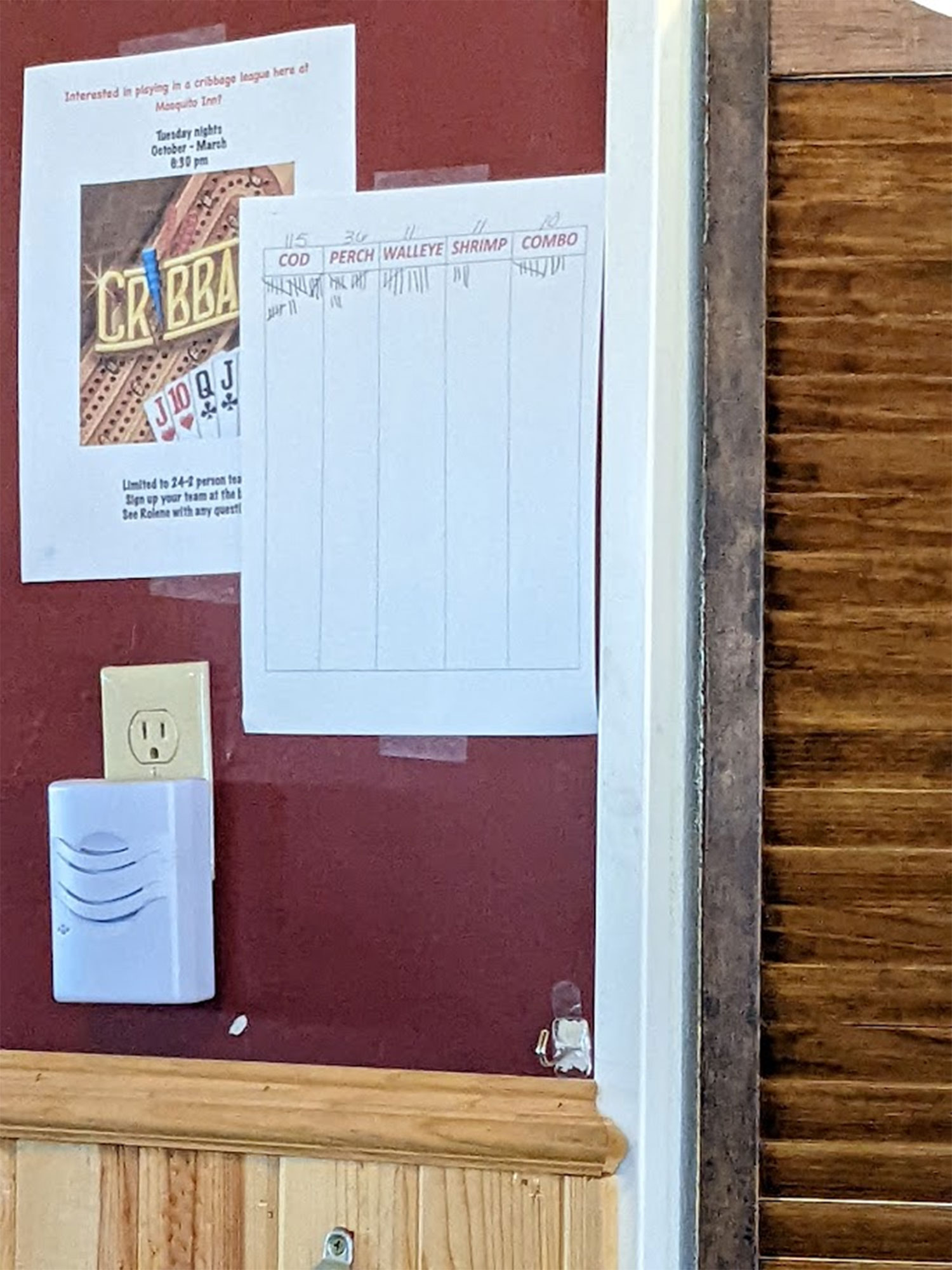 Located in Caledonia at the intersection of N. Green Bay Road. and 4 Mile Road., the Mosquito Inn has been around at least since the 1930s. Records show that it originally was located farther west, at Old Davidson Road. (I was told it was rolled to its current location on logs, though I wasn’t able to confirm this.) Throughout the decades, it changed hands many times. Its name has often been prefaced by its owner’s name, Shoop’s Mosquito Inn and Novak’s Mosquito Inn being just two examples. Cindy and Chad Londre took it over in 2017, after it had closed the previous year, and put their initials in its name. They also added a new kitchen, and made sure a Friday fish fry was on the menu. 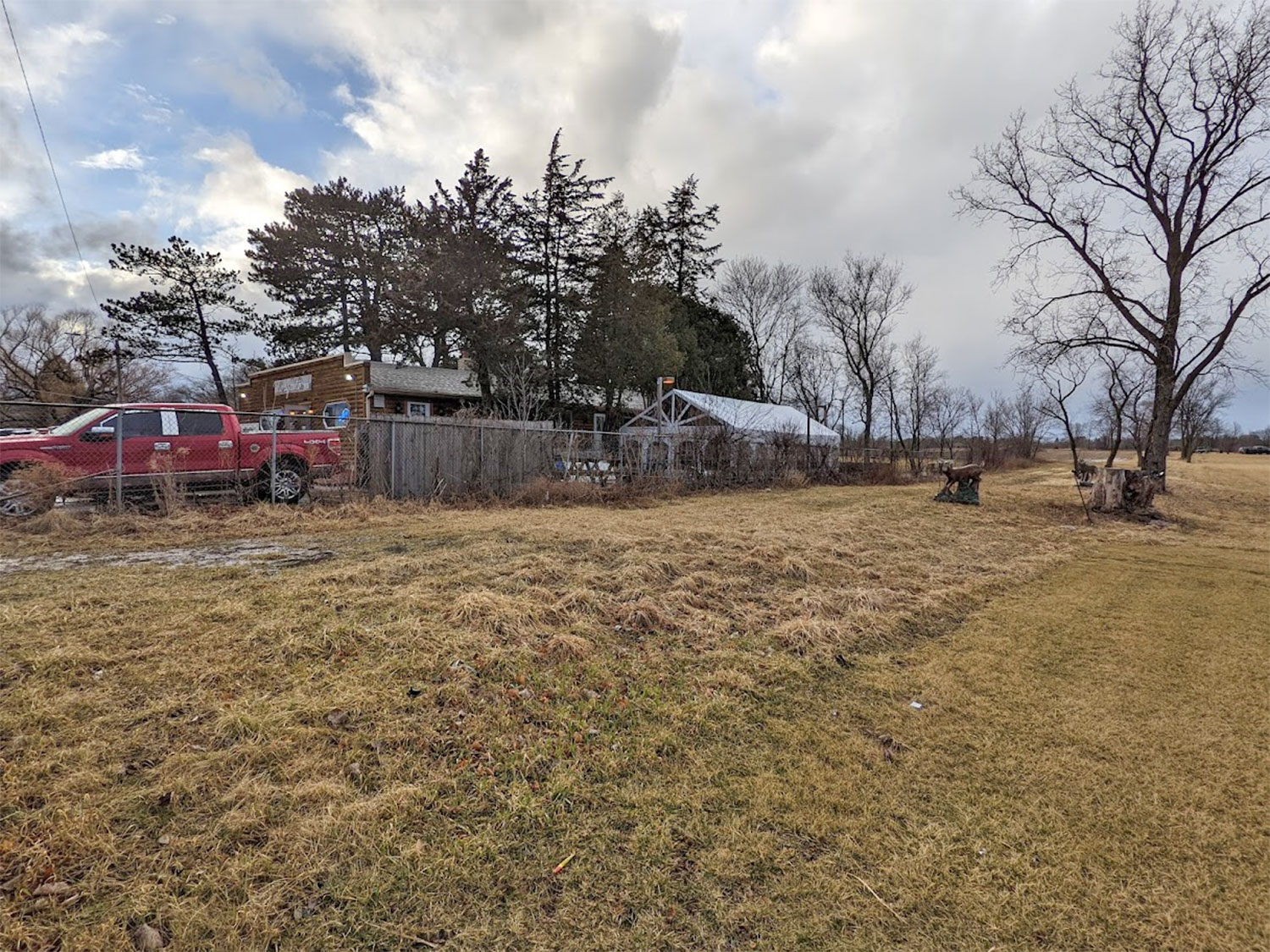 From the outside, the Mosquito Inn appears as diminutive as its name, but a large right-angled bar, seating in both the front and back, and depth to the building tell a different story within the walls. I sipped my Old Fashioned next to a friend, as a few groups of patrons enjoyed buckets of bottled beer around us. Most of the people at the Mosquito Inn appeared to be regulars, and the establishment gave the impression of a destination spot for the surrounding area. The Old Fashioned was on point, sweet and almost perfect. The cherry and orange garnish matched the cherry and orange in the glass, except the ones in the glass were muddled. While some people go through life getting all the attention, others have broken souls and scarcely get by. In the end, all of them die. Such is the life of the fruit of an Old Fashioned, too. Some are chosen to be pretty garnishes, while others get smashed into the glass. But in the end they both get eaten. 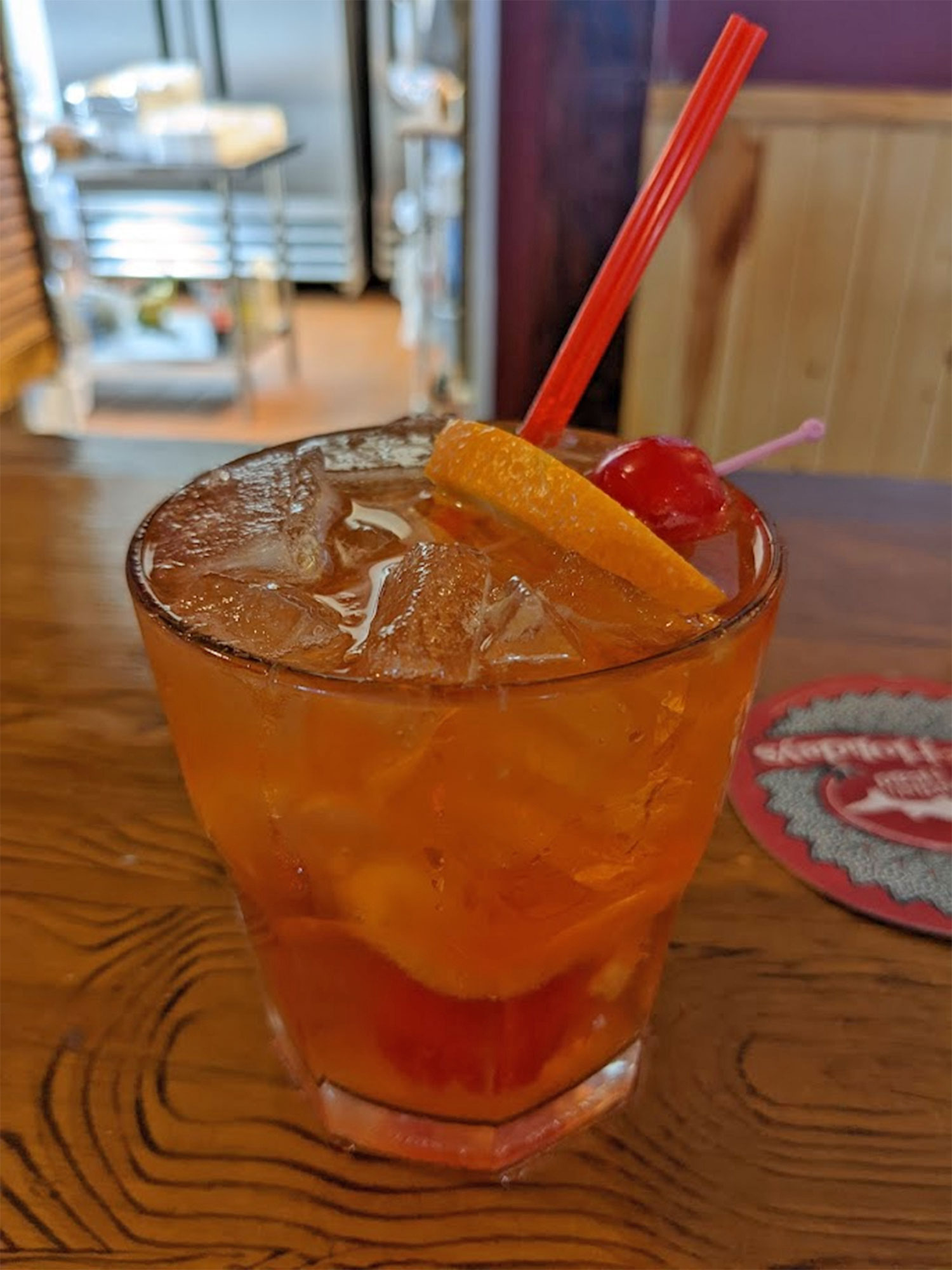 Right as I was thinking “I hope they bring the chowder before the rest of the food,” the chowder was set in front of me. It was thin and souplike, but contained potatoes, clams, and some green herbs. While its contents seemed like they were swimming in a sea of emptiness, it was packed with flavor. This actually wasn’t a bad chowder at all! As I was finishing it up, the fish fry arrived. 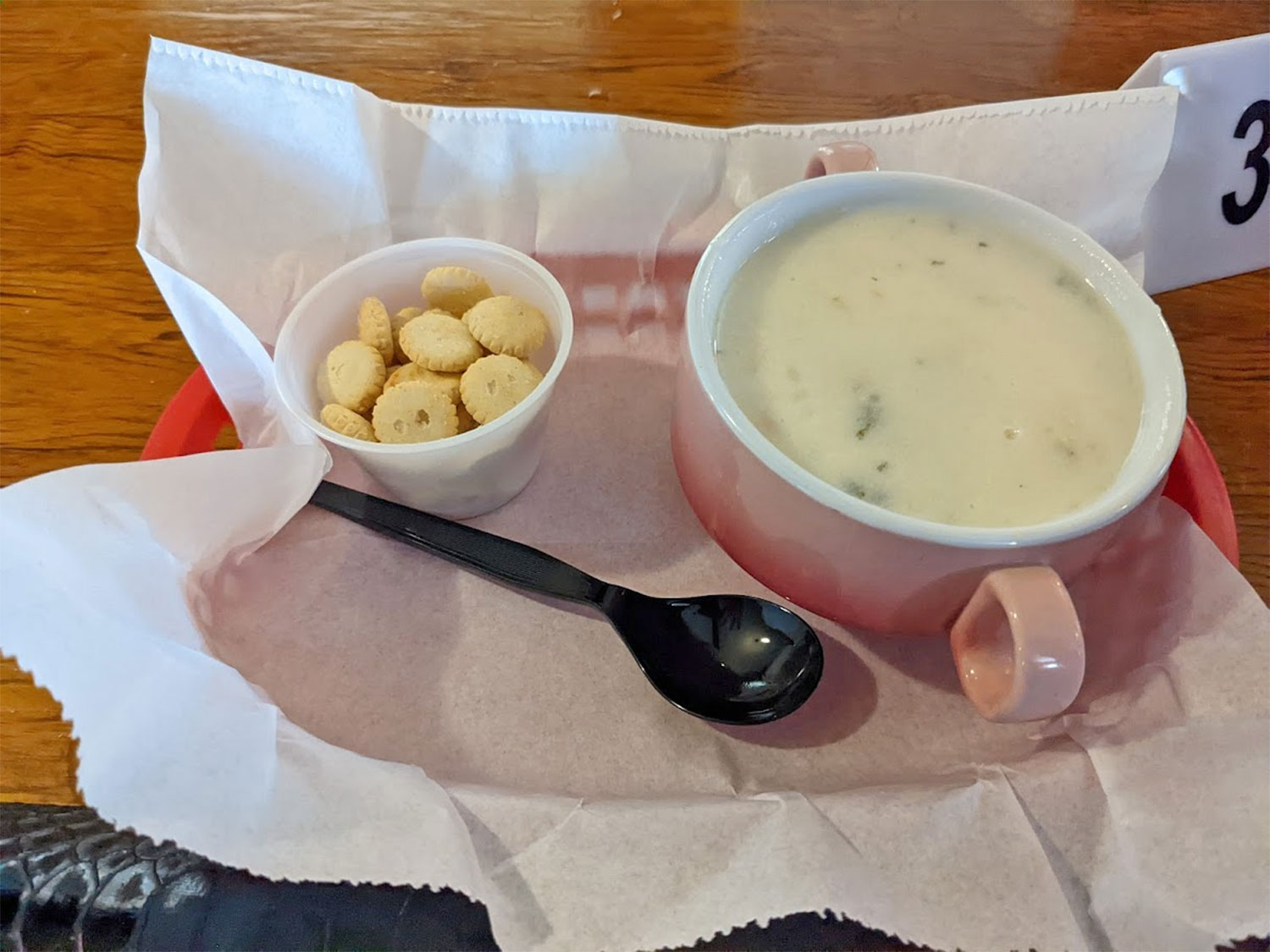 The Mosquito Inn’s combo fish fry is well worth the $25 price tag, on account of both the amount and quality of the food that comes with it. Two pieces of cod, one piece of walleye, one piece of perch, and four shrimp, all of considerable sizes, were piled on top of all the sides—except for a homemade frosted brownie, which was on top of the fish—to the point that the sides could barely be noticed. In fact, I even asked if my rye bread had been forgotten, and was told to look underneath the fish. Sure enough, there it was, warmed with butter melted on it. 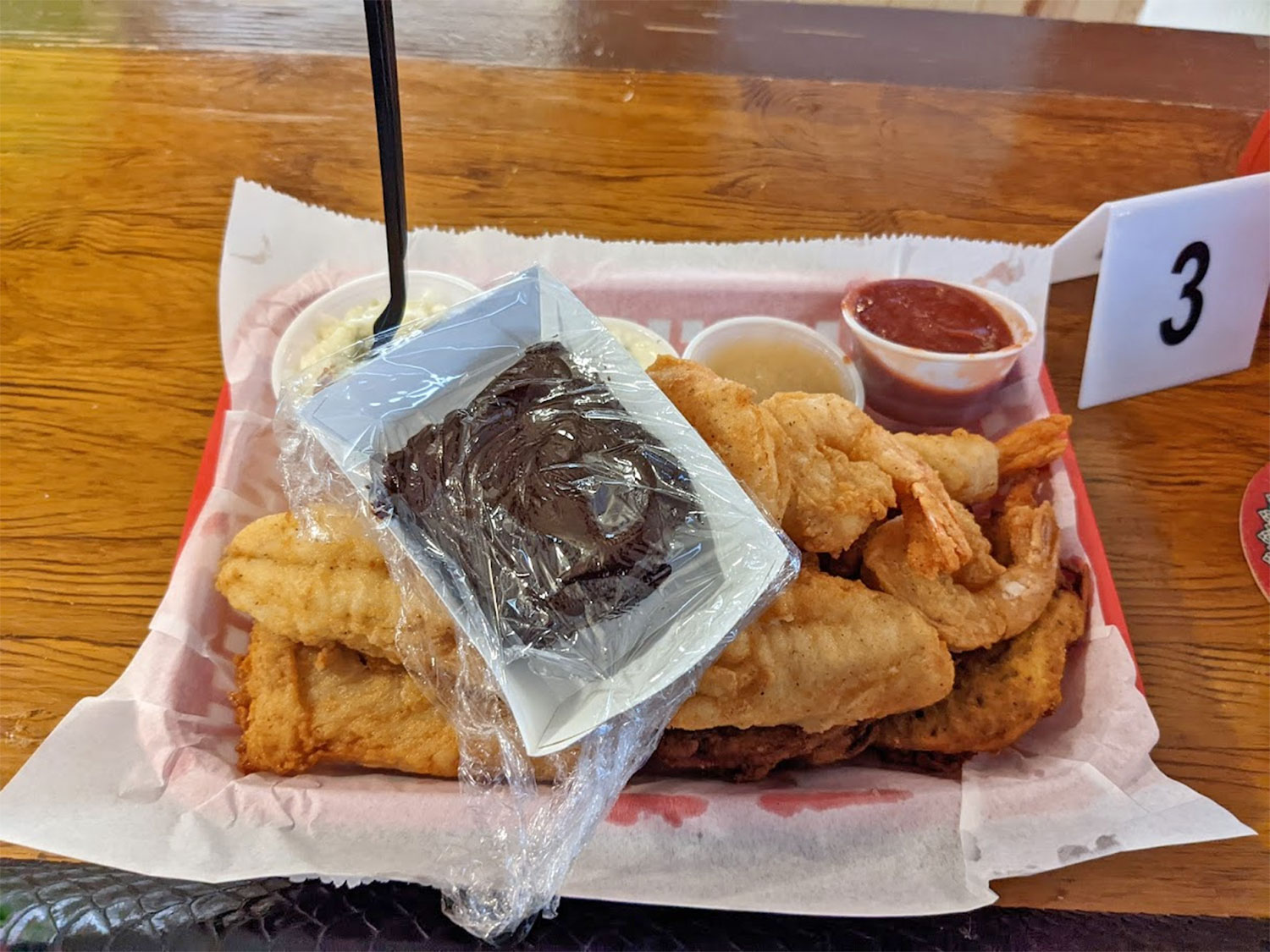 A light, thin, and soft-but-mighty breading, savory with seasonings, covered all of the seafood. The standout of the school of fillets and crustaceans was the cod, being meaty and flaky without imperfection. Both the perch and walleye had plenty of flavor on their own. The walleye had a particularly fishy flavor, not in a repugnant way, but like it had just been pulled from a lake in Northern Wisconsin and fried inside a nearby cottage. The shrimp were an added treat. A cocktail sauce gave them pep, but for the fish there was a thick, relish-forward tartar with sprinklings of dill.

Present and satisfactory, the creamy crunch of coleslaw went down the hatch without much thought. Hardly any more potato could have been packed inside of a potato pancake than was packed in the ones here. The crispy, browned exterior held together a mashed potato-esque center, which had an oniony flavor I recognized in the deep recesses of my mind as from the past, but I couldn’t identify it. 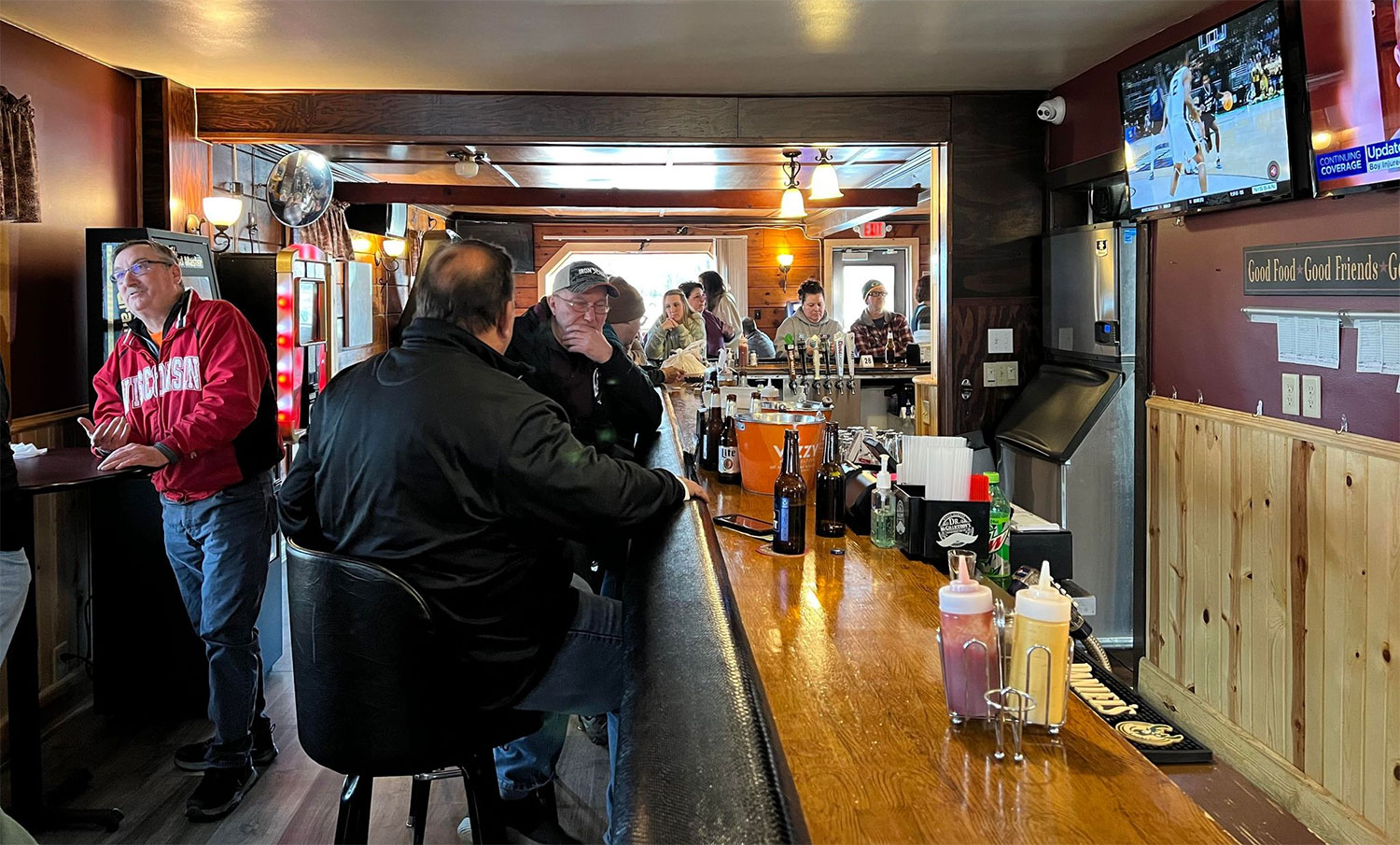 The fish fry crowd and buckets of bottled beer crowd were still going strong when we finished eating. How do I know? On account of the bar chatter, when my friend asked for the bill, the bartender brought her a pickle instead. (Sorry, I did not take a picture of the pickle.) The best part was that the bartender didn’t flinch and acted as though a pickle was a perfectly natural item to request. But it wasn’t the pickle—or even the brownie—that was most memorable about C & C’s Mosquito Inn. It was the heap of breaded seafood that fired the neurons in my brain and put a tally mark in the combo column on the wall.

Takeaways: Order at the bar and be prepared to eat at the bar if the tables are full; top notch Old Fashioned; sea of souplike and flavorful chowder; excavated rye bread; packed pancakes; large amount of fish with the combo; my friend had the cod, which was less than half the price and still plenty of food; savory and seasoned breading; excellent fillets of cod; distinct tasting perch and walleye; comes with a brownie but you might get a pickle too. HONORABLE MENTION 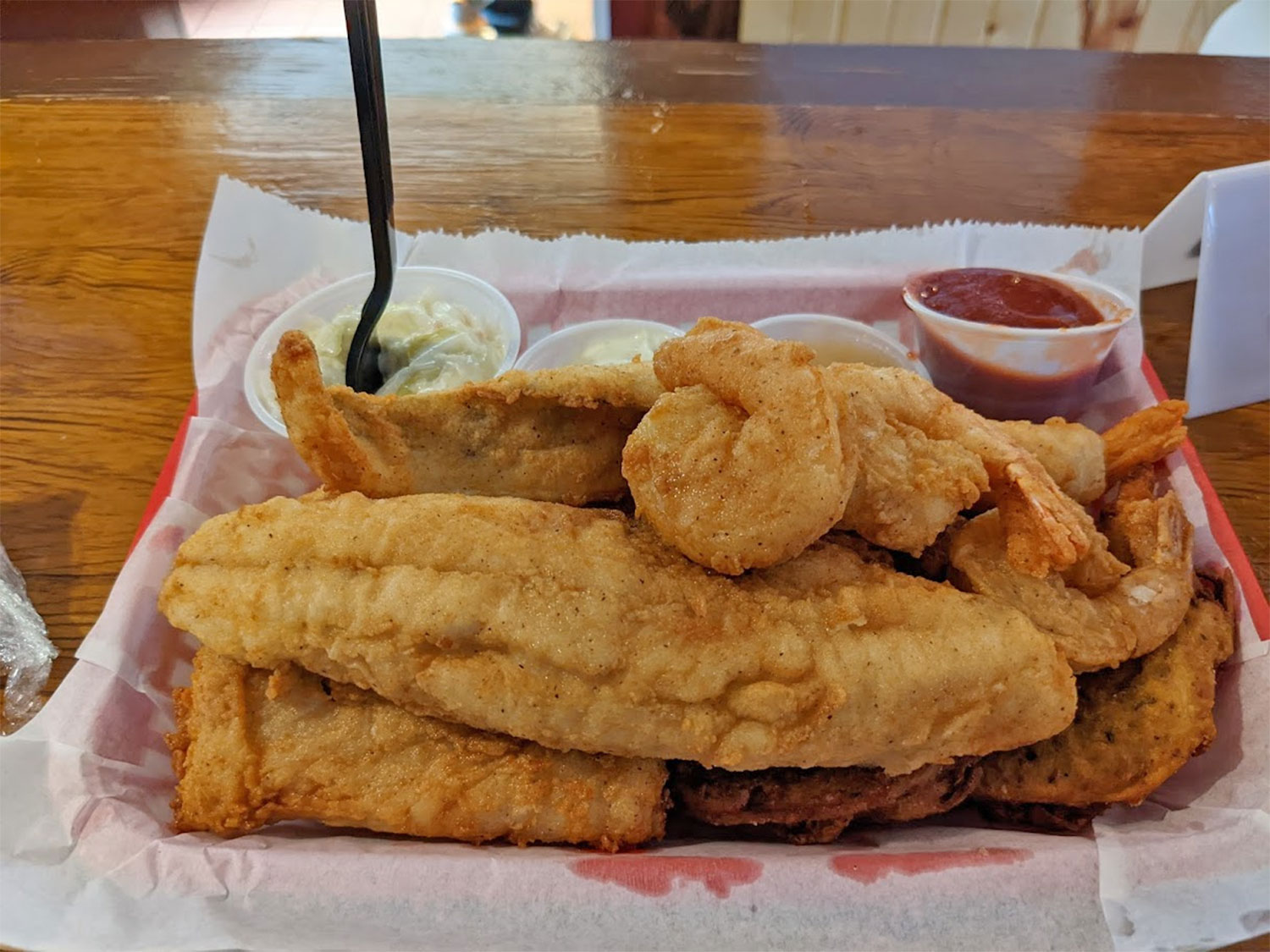 • The best fish frys in Milwaukee (and beyond)