The Hideaway Pub & Eatery (9643 S. 76th Street, Franklin, 414-525-1950) is no hideaway, at least not on a Friday night. Some may believe it to be one since it isn’t in an immediate residential or commercial area, but as I turned off of Ryan Road onto 76th Street and started looking for it, I almost immediately saw a handful of cars parked on the side of the road, and there it sat, across the street from them. With flags flying and lights shining, The Hideaway is probably the least secluded looking place in the area. If Capone would have set up shop here, they would have found him before he got the first sip out of his Old Fashioned.

I pulled into the parking lot, and as the front paved lot was completely full, I pulled behind the building, where a large gravel parking area was almost full as well. I must have parked a few hundred yards from the building, but as I opened my car door, that sweet smell of Friday hit me immediately. Walking into the large building, which is a former American Legion Post, I found a bar stretching a long distance to the south, and spotted my friend on the far end past it. We decided to eat in the hall, which takes up the north end of the building. The split nature of the building and the huge amount of space it has is reminiscent of Clifford’s, although Clifford’s has a more traditional feel, while The Hideaway feels a little more modern. A fireplace brought some warmth to the somewhat sterile looking hall, as did a bar at the far end of it. Although it was around 5 o’clock and there were tons of cars outside, the huge hall was almost empty.

Do you remember being a kid and sometimes refusing to eat the crust of your bread? The thought of doing so will never cross your mind if you are at The Hideaway. There was warm marble rye in the bread and cracker basket, and the crust had a delectable crispiness to it. As I was emptying the bread basket, I put in my order for clam chowder and fish. The chowder arrived a short time later and was excellent: it had a good, thick consistency and fine taste, with a large amount of clam and potatoes. The auspicious bread and chowder had me hopeful for the meal to come. 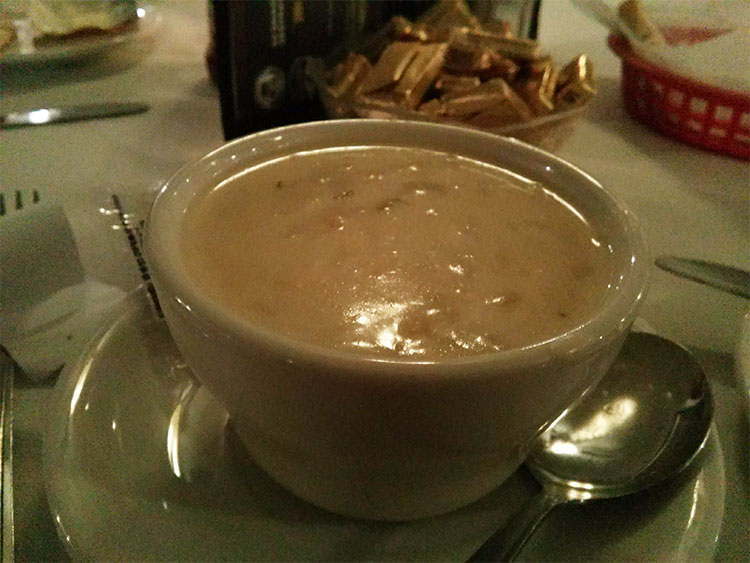 Lake perch, walleye, bluegill, and cod were all options, but I went with the option that had the description “When you can’t decide this is for you!” At $17, the “Wisconsin Platter” was the most expensive of the fish fry choices, but you could probably preface the name of anything with “Wisconsin” and I would buy it. It came with two gargantuan pieces of cod, two pieces of perch, and two pieces of bluegill—one very large and one very small. The fish had a light, crisp breading, which adhered especially well to the cod. The mild tasting breading allowed the inherent fish flavors to come out, and the fish itself was the best part of the platter. I found the tartar sauce to be lacking in texture and flavor, and the coleslaw was unmemorable. The potato pancake wasn’t what it could have been. For one, I think this is the first time I have said “potato pancake” instead of “potato pancakes.” Where was the second one? The lonely pancake was thin, a little chewy, and sort of pasty. If potato pancakes were supposed to breathe, this one wouldn’t be able to. But, it wasn’t completely bad, I mean, it was a potato pancake. Maybe I was just spoiled last week.

I liked The Hideaway, but I wanted to like it more. I’d go back, though, and with a few tweaks to the tartar, slaw, and pancakes, I think it could be of the same caliber as Clifford’s, which it kept reminding me of. By the time I had finished up eating, the hall had almost completely filled with people, and as I drove away in the dark there were even more cars on the side of the road. Some hideaway.

Takeaways: High marks for the bread and clam chowder; Wisconsin Platter had a good amount of fish and fish was decent; coleslaw and tartar were a little lacking; potato pancake could have been better and could have used a friend; this place is huge, and it fills up—I have never been to a hideaway with so many people. 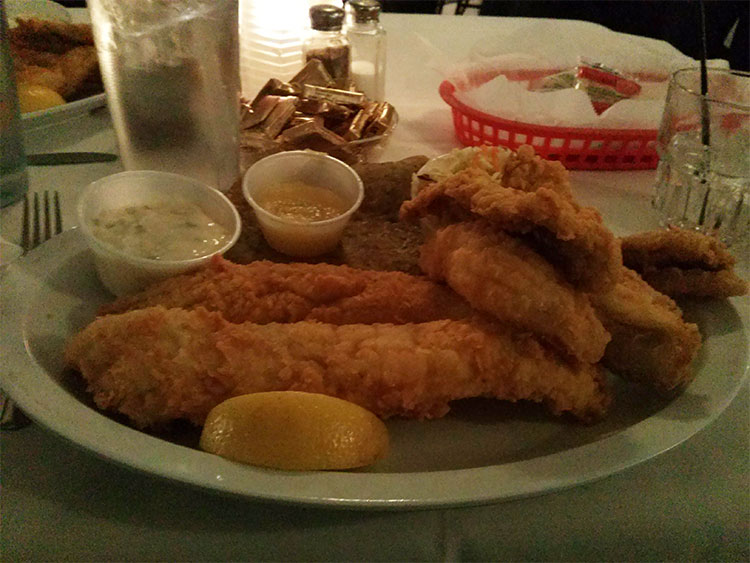