Just over five years ago, I was living in Chicago and humorously musing about being a Packers fan Bear country. Now I live in Glasgow, Scotland. While a lot has changed since then, my fandom of the Green Bay Packers hasn’t wavered all too much.

If I were to take a time machine back to Waukesha in 1998 and tell 18-year-old me that one day he would live in another country and that there was life after Brett Favre and Limp Bizkit, 18 year-old-me would say ”Okay, but pagers are still a thing in the future, right?” Yet here we are. Two decades later, I’m living the American dream in Glasgow, Scotland with my wife and two young kids. We’ve been here just over a year now and life has settled down. I’ve been able to look around and appreciate this great place.

Quick refresher: Glasgow is the third largest city in the United Kingdom. I think people forget about visiting here when they’re in the UK, and that’s too bad. Yes, it rains a lot. Yet, there is a vibrancy and energy to this city with world-class museums and amazing restaurants and bars, and yes, haggis and whisky. Glasgow boasts many parks, as well as people like Billy Connelly and the more current Lewis Capaldi. There are a lot of benefits of living here: national health care and a great educational system, among them. That said, there are some parts of living here that make me miss the good US of A. Wendy’s and easy access to the NFL come to mind.

I’ve lived a few different places, and being able to watch the Packers on Sunday always kept me connected back to growing up in Wisconsin. It can serve as a remedy for homesickness, which I’ve found to have intensified the more miles there are between me and Wisconsin.

It’s tough to be a committed Packers fan here. As far as I can tell, there is no UK version of NFL Sunday Ticket. there will occasionally be a game on a sports cable channel, but this season the Packers were only on once, the game they lost to the Chargers. There is a six-hour time difference, so a noon kickoff in Green Bay is 6 p.m. for me—manageable, but the night games start in the wee hours of the morning, so I usually have to get caught up in the morning thanks to YouTube and official NFL recaps. I read articles and game notes and watch the occasional press conference, but without the direct line of sight of watching every game, it’s a real effort to stay on top of it all. I still care, dammit!

Now, one surprising thing that I’ve noticed here is that there are a lot of Packer Backers, and fans of the NFL in general. The league has been becoming more popular in the UK in the last 10 or so years, and there were four games played in London during the 2019 season. Each of those games were sell-outs. Not kidding…even the Tampa Bay Buccaneers played in front of a packed stadium.

I’ve worn my trusted Packers beanie out in town and have gotten the nod or thumbs-up from Glaswegian fans. Sometimes there is a quick chat about Aaron Rodgers or how legendary Lambeau Field is. I love it when these quick exchanges turn into a full-blown conversation on our mutual fandom. A lot of the people I’ve talked to became Packer fans because of the Madden games. Similarly, I was a fan of Manchester United thanks to FIFA. I call this my “Madden Theory.” People get to know the teams because of video games, and all of the Green Bay squads in that game have been really, really great for the last 20 years. If you played as the Packers in Madden 2010, you would beat any pal backed the Patriots. Hands down, no contest, not even close, not even with dumb Tom Brady.

Outside of Packers apparel, I see the occasional person wearing a Chargers hat, a Cowboys beanie. That would also line up with my Madden theory, which would also explain the lack of Bears and Bengals hats seen in public. Let’s be honest, even if you don’t buy into my Madden Theory™, the Green Bay Packers are also a franchise with a rich history and a really likeable story. A small town that is built around the team is very relatable to a lot of the smaller towns here that are built around their local football clubs. (Sorry, I can’t call it soccer, I’ll get my visa revoked.) The team’s history and constant presence as a playoff team gives them a brand that the occasional fan can really get behind.

The Packers had a great year and this weekend they head into the Divisional Round of the playoffs. I for one am pumped. Kickoff here in Glasgow is 11:40 p.m., and thanks to Sky Sports and a login from my brother-in-law, I’ll be watching the game with you all. I’ll have a beer while wearing the same Wiskullsin Packer Heart Shirt from five years ago, and I’ll quietly cheer (sleeping kids) for the mighty Green and Gold from 3,500 miles away. Go Pack. 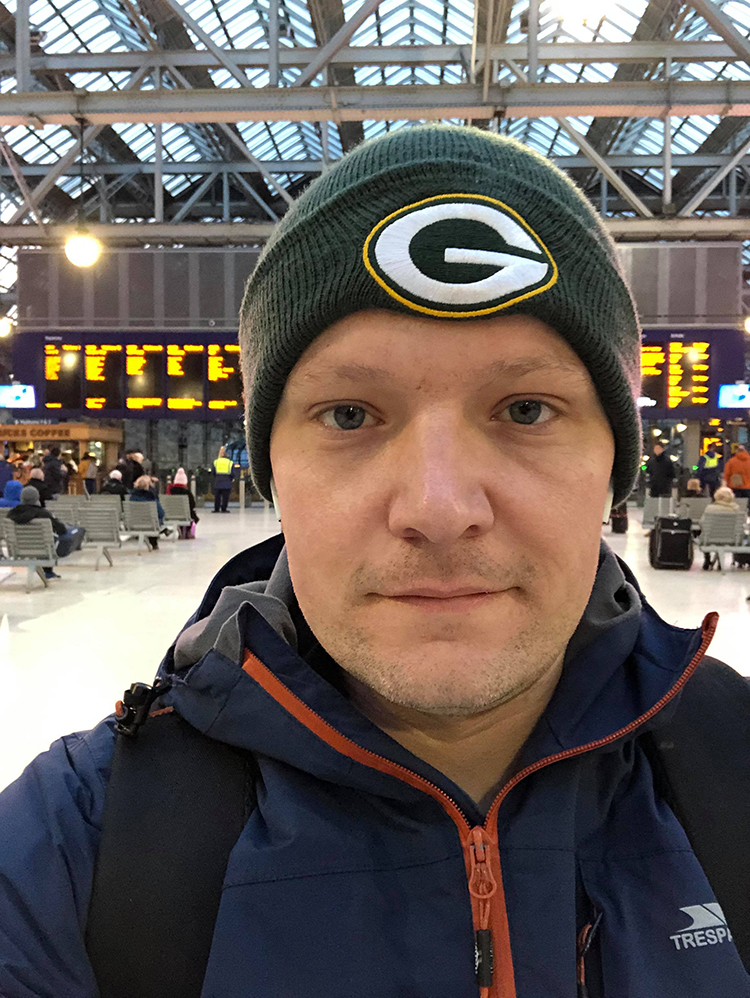