Prior to last month, I had seen The Rocky Horror Picture Show only once, when I was 15. My friends and I were gathered in the wood-paneled basement of the only girl who would give us the time of day, watching movies and doing whatever else a bunch of teenage dorks do when they’re left to their own devices. At some point, our host produced a VHS copy of Rocky Horror—an item borrowed from her older brother, because that’s how these things work—along with a comic book that explained all the ridiculous shit you were supposed to yell at the screen. We were intrigued. We had heard of the film, but none of us had actually seen it. It looked naughty. Maybe there were boobs in it. We popped it in.

In the decades that followed that fateful basement viewing and subsequent non-orgy orgy, I remained mostly in the dark about The Rocky Horror Picture Show and the cult surrounding it. I knew the basics, of course—“The Time Warp,” Meat Loaf on a motorcycle, Tim Curry in drag, a young Susan Sarandon in her underwear, people throwing toast at each other—but the specifics eluded me. Was it an early example of a “so bad it’s good” movie, like The Room? Was it a dreaded “bad on purpose” movie, like those Sharknado things? What was the appeal? After a while, I gave up caring. It was just another thing that had skirted close to my interests but had ultimately passed me by, like skateboarding or LARPing. I harbored no ill will toward The Rocky Horror Picture Show. I had simply missed out.

Ditto for the venerable midnight screening at Milwaukee’s Oriental Theater. I knew the theater held the record for the longest continuous showing of the film—a tradition dating back to 1978—and I knew a local “shadowcast” called Sensual Daydreams did, well, something at those screenings. But even after nearly 20 years of living on the East Side, I had never once stumbled into the Oriental to check out the film or live cast. Sure, I would occasionally see a bunch of theater kids dressed in fishnets standing in line while I was stumbling in or out of the Landmark, but that was about it. Again, it was something that had passed me by.

But fuck that, because there’s a first time for everything—even watching a bunch of people howl along to a 40-year-old B-movie musical featuring a pre-Clue Tim Curry. Hell, maybe especially that. So last month I decided to finally own up to my cinematic and Milwaukee blind spots. Come hell or high water (or getting tired, because this shit started at midnight), I would see The Rocky Horror Picture Show with a live cast at the Oriental Theater.

But who would accompany me on such an important quest? While I savor the pleasures of seeing movies in the theater by myself, the thought of seeing this one solo seemed dicey. So I texted a friend—let’s call her “Erin”—and asked if she would be interested in joining me. “You know what,” she replied, “Why not!” Like me, she had never seen the live Oriental performance, though she was familiar with the movie. “I know every word to every song!” It was the perfect combination. She could experience the live performance for the first time along with me and explain what the fuck was going on in the film. Plus, her “You know what? Why not!” text perfectly summed up the shrugging-emoticon spirit of the whole thing.

So, on a fateful Saturday night, following a few beers at the aforementioned Landmark, we found ourselves standing in line outside the Oriental with a bunch of theater kids dressed in fishnets. Go figure. It wasn’t long before a cast member approached us. Was this our first time? Yes, yes it was. “VIRGINS!” he cried, whipping out a marker and branding our faces with red “V”s. For the rest of the night, we were marked, our scarlet letters acting in the exact way Hester Prynne’s didn’t. “Look for me before the movie,” our new friend said. “You’ll be on my team for the virgin games!” Erin and I exchanged a glance. We stepped inside. 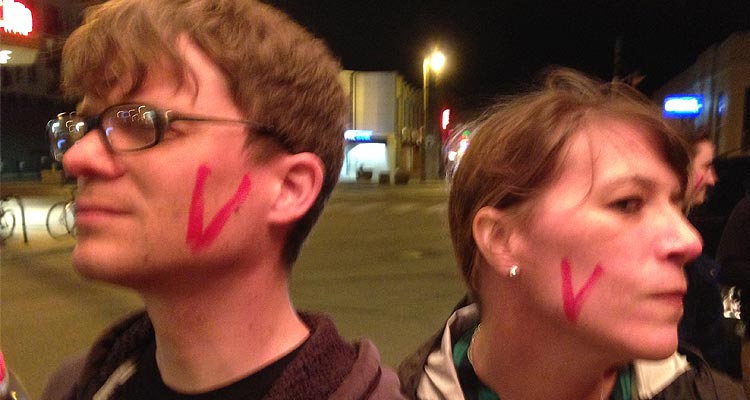 It’s here that I should say that beyond briefly perusing their website, I had done little to no research on Sensual Daydreams. My biggest takeaways were that I was supposed to “limit rice to a small sandwich or ziplock bag” and that “no more than two toilet paper rolls per person” were allowed. Thus, I was convinced of two things: one, no one would really show up (the thing has been going on for over 30 years, after all); and two, the cast would be made up of 30- and 40-year-old lifers who had met sometime in the early ’90s—maybe at a Mad Planet retro night or a Joy Farm taping or whatever—and who, years later, simply wanted to get out of the house once a month and do “The Time Warp.” In other words, my expectations were low.

I was wrong on both counts. The lobby was relatively bustling for a midnight screening, filled with dressed-up die-hards, giggling newcomers, and a fair share of un-ironic fedoras. I’m bad with estimating crowds, but I’d guess there were 50—maybe 60?—people in attendance. The members of the cast, meanwhile, were shockingly young, and almost all certainly in their early ’20s. In fact, save for a shirtless dude who asked his buddy to recruit some “old people” from across the street at Von Trier, I was probably the oldest person there. (Life-threatening Milwaukee Record drinking game: Take a shot for every time you read a variation on the previous sentence.)

So, after soaking up the scene, politely refusing the homemade “survival kits” being sold by the cast (“Buy our shit!”), and discovering the Oriental did not serve alcohol for RHPS (“Fuck!”), Erin and I took our seats. The lights went down and a cast member doubling as the night’s MC and “Brad” (the latter made famous by Spin City mayor Barry Bostwick) appeared on stage. A gleefully vulgar and theatrical introduction followed, and within seconds, MC/Brad had one side of the theater screaming “ASSHOLE!” and the other screaming “SLUT.” It apparently had something to do with the movie. Oblivious to the context, I joined in.

A volley of dead baby and Helen Keller jokes followed (classic stuff), and then it was time for the rules, of which there were many. “Rule number two,” MC/Brad exclaimed, “No sex in the theater!” The crowd howled. “Rule number seven, no open flames!” More rules followed: no throwing shit at the screen, no throwing shit at the cast, no touching the cast, etc. Jesus, was this a movie or a strip-mall haunted house?

Then it was time for—sigh—the virgin games. Though we had done our best to sink into our seats and avoid detection, Erin and I were quickly wrangled on stage for said games. Joined by the cast and a handful of fellow newbies, we were handed a condom and instructed to blow. Erin and I exchanged a glance. With me holding the condom and Erin blowing, we gave it our best. Sadly, our best was not good enough. We lost. Badly. Like, I don’t think we managed to blow the thing up at at all. Somewhere, our team leader probably wept. “Roll the fucking film, asshole!” MC/Brad bellowed to the projectionist before we had time to process our shame. And with that, we were off.

(Fun fact: I put the used condom wrapper in my back pocket for some reason. Days later, while I was working in my office across town, I received this delightful-to-explain text from my wife.) 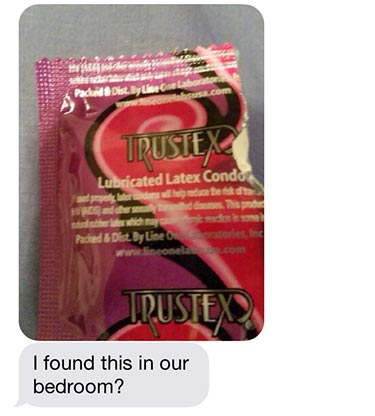 So, the cast. As the iconic Rocky Horror lips appeared on screen, lip-syncing the opening number (“Science Fiction/Double Feature”), a cast member appeared in the aisle and began lip-syncing along to the lip-syncing lips on screen. It was only the beginning of what would prove to be a surprisingly elaborate “shadow” production of the film. Once again, my assumption that Sensual Daydreams simply did “The Time Warp” and called it a night was dead wrong. Scenes were recreated to a T as they unfolded on screen. The “creature creation” sequence, perfectly mimicked by the cast, looked great. Shit was yelled at the screen at a near-constant clip. (Brad, apparently, was the asshole, and Janet the slut.) Stuff was thrown in the air. Squirt guns rained down on us during a thunderstorm scene, and then kept on raining down on us long after the scene ended. (Erin: “Okay, that’s enough rain.”) MC/Brad was excellent, and the cast’s Janet managed to give Susan Sarandon a run for her underwear-clad money. Everyone cheered when Dr. Frank-N-Furter sang the words “sensual daydreams” during the final song. It was a ton of fun.

As for the movie itself, I have no godly idea what the fuck it was about. Erin had warned me that it went “off the rails” around the time Brad and Janet arrive at the castle, and she wasn’t kidding. Who was this narrator guy? What was up with Meat Loaf? Riff Raff and his sister are aliens? And what about the songs? The opening “Science Fiction/Double Feature” ballad was excellent, and “The Time Warp” was great fun, but the rest seemed same-y in the way that a lot of songs from musicals seem same-y. Sure, seeing a movie for the first time in the presence of dozens of screaming madmen/women isn’t exactly an ideal viewing experience, but this was ridiculous. At least Tim Curry was at his most “I Do The Rock”-y. At some point (maybe around the Meat Loaf scene) I simply gave up and let it wash over me. I watched the cast. They were terrific. Eventually, the lights came up. Erin and I exchanged a glance. It had been a ton of fun.

Did I enjoy myself? Yes. Was I glad I finally experienced a hallowed Milwaukee tradition? Yes. Still, I couldn’t help feeling a tinge of sadness as I left the theater. Here was this thing that I had avoided my entire life—and, if I’m being honest here, had quietly scoffed at my entire life—and it turned out to be a good time. The cast had been clearly having fun, and the audience couldn’t have been more delighted. Why wasn’t this something I was into? Maybe it wasn’t too late! Days later, I briefly entertained the notion of inquiring about joining the cast. But no. That time had long passed, somewhere between me watching the movie for the first time in a wood-paneled basement when I was 15, and an older me seeing it again decades later. I had simply missed out.

Maybe. The next screening of The Rocky Horror Picture Show at the Oriental Theater is this Saturday, with countless more screenings to follow the second Saturday of every month. Maybe that’s the appeal. Take it or leave it, find it when you’re young or when you’re old, it will always be there. Will I be back, howling along, throwing shit in the air, and knowing a few more of the words? You know what? Why not. 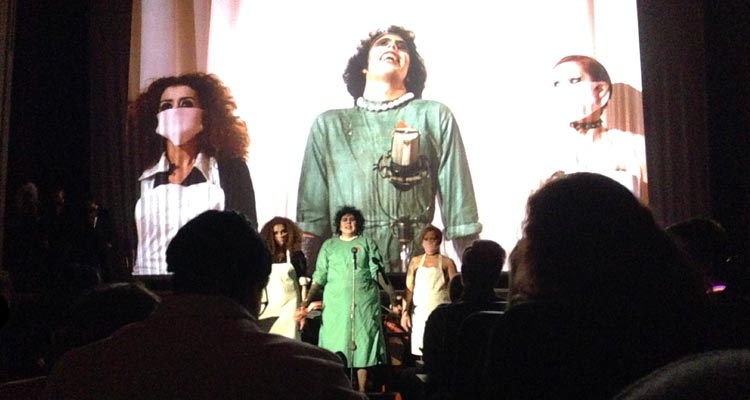