Though Milwaukee doesn’t currently have a comedy club to its name, the lack of a traditional venue that’s fully dedicated to hosting stand-up shows has resulted in motivated comedians and creative producers bringing showcases to unconventional and, at times, quirky locations. Lately, some of the city’s best stand-up shows have taken place at craft breweries, in bars, at a bowling alley, and in the basement of Grand Avenue. Starting this weekend, a brand new stand-up showcase will add to that by bringing Milwaukee comedians to yet another new platform: live radio.

On Saturday night, the first “Live On Air” will make its debut on Riverwest Radio‘s airwaves. Starting at 10 p.m., a group of comedians at Riverwest Film & Video will perform in front of a small audience, but their set will also be broadcast live on 104.1 WXRW. Local comedians AJ Grill and Carter Deems, who also produce a scripted radio show on the station called BadTV, are responsible for the creation of this interesting showcase, and they’ll serve as the show’s hosts. Already familiar with the space and the staff, Grill felt Riverwest Film & Video would be an ideal spot for comedy.

“There are a ton of stand-up shows at traditional bars and small back rooms,” Grill says. “We want this show to be different and be a cool, fun thing that when people think about comedy in Milwaukee, they think about this weird late night show in this little film and video store that doubles as a community radio space.”

Though FCC regulations were a concern, the hosts say “Safe Harbor Hours” (that span 10 p.m. to 6 a.m.) allow for slightly more coarse material, should comedians choose to go a dirtier or more offensive route.

“During this time, the station can broadcast ‘indecent material,’ which is cool, I guess,” Deems says. “My most indecent joke is about zip-off cargo pants, but this will allow the other comics to not have to censor their material too much.”

Live On Air will take place the last Saturday or each month. The first showcase features Deems and Grill, along with Eric Smith, Raegan Niemela, Rich D’Amore, and Chris Schmidt. Listeners can tune in at 10 p.m., and people are encouraged to come to the station to watch the show in person.

“I’ve never heard of any other comedy shows like this, so hopefully it will be a cool new thing that people will want to check out,” Deems says. 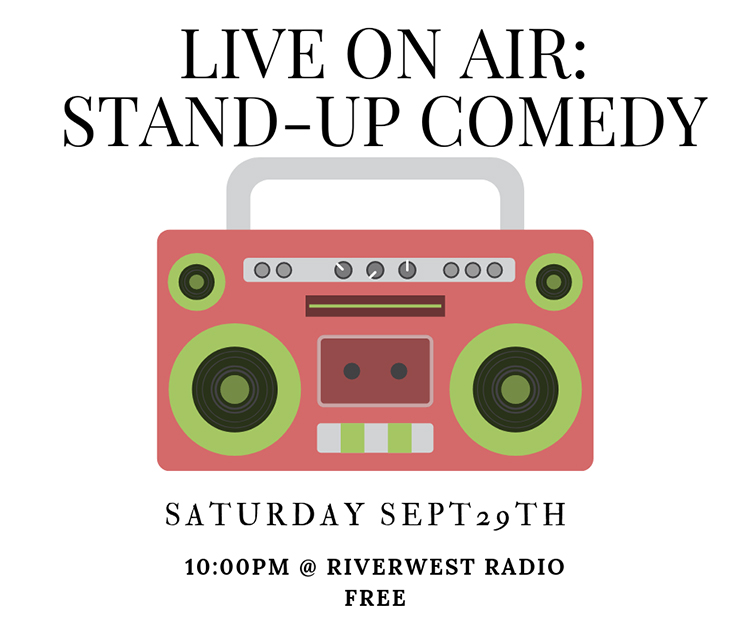