Comedian Lewis Black is no stranger to Wisconsin. He’s also no stranger to drinking in Wisconsin. On Black’s first album, 1999’s The White Album (recorded in Madison), the perpetually pissed-off stand-up goes off on our state’s heavy drinking culture, claiming that, among other things, “you people, apparently, have some sort of federal grant for drinking,” and that “more brandy is drunk in Wisconsin over Christmas than was drunk during the entire second World War.”

But is Black’s rant accurate? In honor of Milwaukee Cocktail Week, we decided to fact-check the comedian’s legendary “Drinking in Wisconsin” bit, using the unedited version found on an outtake EP called Revolver, and on YouTube (current views: 1.2 million).

“I love Wisconsin. I love coming here. I perform here a lot.”

True. In 2015, Black told Madison’s Isthmus he has “a lot of affection for Wisconsin, I really do,” and talked about how an early Summerfest gig was his “first chance to play a large venue.” Accordingly, Black spends plenty of time here. His most recent Milwaukee appearance was in May at the Pabst Theater—an appearance that was granted a second show due to overwhelming demand.

“I’ve discovered that you people, apparently, have some sort of federal grant for drinking.”

False. While there are federal grants for things like Great Lakes restoration, sport fish restoration, and hunter education currently available in Wisconsin, no such drinking grant is on the books. However, Wisconsin does have a number of state grants aimed at safe driving and minimizing traffic fatalities, no doubt due to the state’s unofficial drinking grant.

False, but pretty close. According to a 2015 study by the Distilled Spirits Council of the United States, Wisconsin has a “spirits excise tax” of about $3.25 per gallon, making the state the 10th cheapest place to buy liquor in the country. (Wyoming and New Hampshire have no spirits excise tax, while Washington’s rate is a staggering $35.22 per gallon.) Beer, on the other hand, is extremely cheap in Wisconsin; beer taxes were only $.06 per gallon in 2015 (tied with Missouri), and beat only by, you guessed it, Wyoming ($.02).

“I don’t know if you’re using that farm subsidy money, or if you’re just hijacking liquor trucks, but this is fucking insane!”

Undetermined. While Wisconsinites probably could figure out a way to spend their farm subsidy money on booze, they aren’t hijacking many liquor trucks. Someone in Oak Creek made off with a semi loaded with 20,000 pounds of cheese back in June, though.

“I come here because basically if I spend four days here drinking, even with the plane ticket it’s cheaper than drinking in New York!”


Undetermined, but yeah, probably. New York has a $6.44 spirits excise tax, nearly double the rate of Wisconsin. Meanwhile, round trip tickets from New York to Wisconsin are currently hovering around the $200 mark. Our math may be fuzzy, but yeah, $200 could easily buy twice as much booze in Wisconsin than in New York. Like Mad magazine used to say: Cheap!

“I’ve been in bars here and it’s like New Year’s every fuck night! ‘Uh, New Year’s, that’s when we drink with hats on!'”

True. Yes, New Year’s is when we drink with hats on.

“You drink on another level. I was in Ireland […] and I had this feeling that the people of Wisconsin actually were the people who settled Ireland.”

False. Wisconsin’s love for St. Patrick’s Day (and Pat McCurdy) aside, Living In Ireland informs us “Ireland was first settled by humans at a relatively late stage in European terms—about 10,000 years ago. […] Around 300BC, Iron Age warriors known as the Celts came to Ireland from mainland Europe.”

“You always have three drinks in front of me! ‘I got your other one! This one’s free!'”

True. Yep, the “free drink just because” phenomenon is real, and it’s amazing.

“One night I was performing in Milwaukee. I finished my set, it was late in the evening, and I had a Scotch and two of the waitresses sat down and they had a brandy Old Fashioned. You’re the only fuckers who drink that!”

True. The ever-popular brandy Old Fashioned is known as “Wisconsin’s State Drink,” as anyone who has ever gone out for Friday night fish fry or patronized a supper club can attest. But why brandy Old Fashioneds, and not the original bourbon Old Fashioneds? The Isthmus once chalked it up to Wisconsin’s large German population, the simple popularity of brandy, and “the brand dominance of Korbel.”

“More brandy is drunk in Wisconsin over Christmas than was drunk during the entire Second World War.”

“So I was sitting there, and at that point they ordered a shot of Jäger. Because I guess, you know… [applause] You’re the only people who applaud Jäger! And I’m telling you, something is wrong with that!”

True. Yes, we are the only people who applaud Jäger, and yes, there is something wrong with that.

“You know how they make Jäger? They take all the bar rags in this country, and they wring ’em into a…That’s how they do it!”

False. Maybe. Though it may taste like used bar rags, Jägermeister, according to Thrillist, is actually made from “56 herbs, including citrus peel, licorice, and ginseng.” Most of the remaining herbs are a company secret, though Snopes helpfully reminds us the mysterious recipe does not include elk or deer blood.

“And remember this: You are not, you are not alcoholics. You, and my hat is off, are professionals.”

True. The shirts say it all. 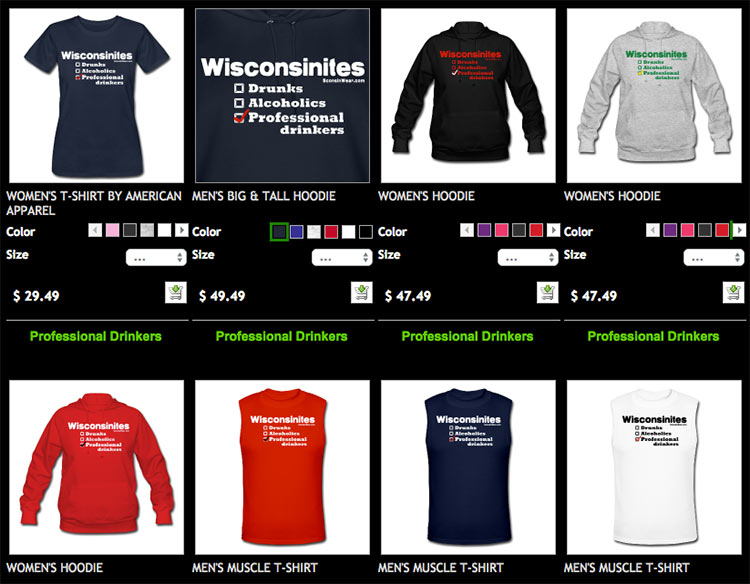