If you were among those who kicked yourself for missing out on the affordable oddity of the Johnson’s Park dinosaur that sold for $11 at auction, there’s something else currently on the market that might be of interest to you. The Shorewood Library is selling a life-size diorama that’s a replica of the room from the classic children’s story, Goodnight Moon. The asking price is $75 (or best offer).

The piece is approximately 12 feet long, three feet deep, and eight feet high. The diorama features many of the items referenced and pictured in the 1947 Margaret Wise Brown-written, Clement Hurd-illustrated bedtime book. The piece was originally a display in the Harry W. Schwartz Bookshop on Oakland Avenue in Shorewood. After 82 years in business, the local book chain closed its remaining stores in 2009. The Goodnight Moon display was purchased by Shorewood Library Friends after Schwartz closed, and it’s been on display in the library’s children’s area since.

The massive exhibit will need to be disassembled (during non-library hours). Interested parties can email [email protected] to work out a deal. Goodnight, room. 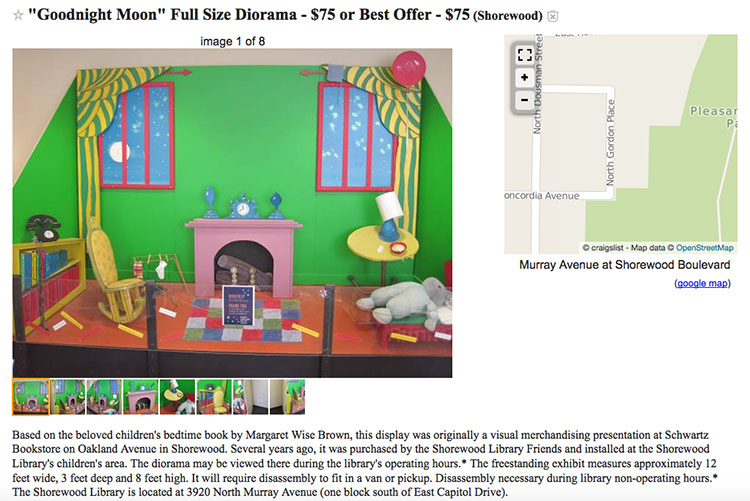