Back in its heyday, Johnson’s Park had a Go Kart track, bumper cars, batting cages, a water slide, an arcade, and two 18-hole miniature golf courses that were decorated with massive ceramic statues of a variety of creatures. Between its early 1970s outset and the late ’90s, the park offered family-friendly fun on Milwaukee’s north side. By the turn of the century, Johnson’s Park was abandoned. It was demolished in 2007, leaving just two dinosaur statues behind when the rubble was cleared. Once 2011 rolled around, just one dinosaur remained. Yesterday, that weathered and graffiti-covered dinosaur—and with it, the last remnant of Johnson’s Park—was sold at auction. The winning bidder paid $11.

Between November 23 and December 6, Hartland-based Gerlach Companies, Inc. solicited bids on an array of Johnson-owned items. An auctioneer’s note described the lot as such:

“Mr. Johnson of Johnson Park has decided to sell some of his personal cars, trucks, snowmobiles, tractors, Go Karts, games, baseball pitching machines as well as his beloved Jaguar & the famous T-Rex!”

By the time the auction ended at 10 a.m. Tuesday, the iconic statue (estimated to be approximately 15 feet tall) sold for a laughably low sum, especially given its status as the last relic standing at the vacant 76th Street lot that was the longtime home to a beloved Milwaukee entertainment institution and the source of countless childhood memories.

The Johnson’s Park dinosaur will soon be extinct from public view, but it will live on in the most recent Direct Hit! press photo and in the possession of someone who’s now $11 lighter. If that person happens to be reading this, we’ll give you $20 for it right now. Cash. 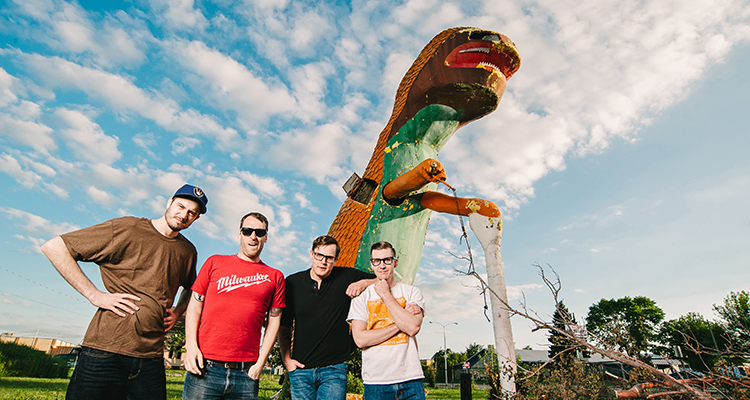