Visit the Milwaukee Hurling Club tent at Milwaukee Irish Fest, August 18-21, to learn more. The MHC holds matches most Sundays between June and August at Brown Deer Park; the 2022 championship game is August 28. More information is available on the club’s website at hurling.net.

This week begins one of the largest ethnic festivals on the lakefront: Milwaukee Irish Fest! Among all of those great performances, food, and Lakefront firkins is one booth that you really should not miss: the Milwaukee Hurling Club. It might change your life.

Five years ago, I was faced with a terrible truth: I was unable to keep playing club soccer in Milwaukee. I just couldn’t keep up with the level of talent that our local schools and clubs produced on a yearly basis. If I’m completely honest with myself, my barely-made-high-school-varsity skills have likely never been able to truly keep up, but I was at least able to make a go of it for a while. I enjoyed it, though becoming a frequent target for someone to practice their rainbow kicks on wasn’t particularly fun. I realized that my time in competitive footy was over.

Then, like a romcom’s too-serendipitous-to-be-real coincidence, that same day I went to a friend’s backyard barbecue and lamented my lost youth and the inexorable passage of time. In return, the host of the party asked if I was interested in playing a game where everyone starts at the same baseline, somewhere between “amateur” and “awful.” Boy, would I, that sounds great! He asked if I had ever heard of hurling. I admitted that I had not. 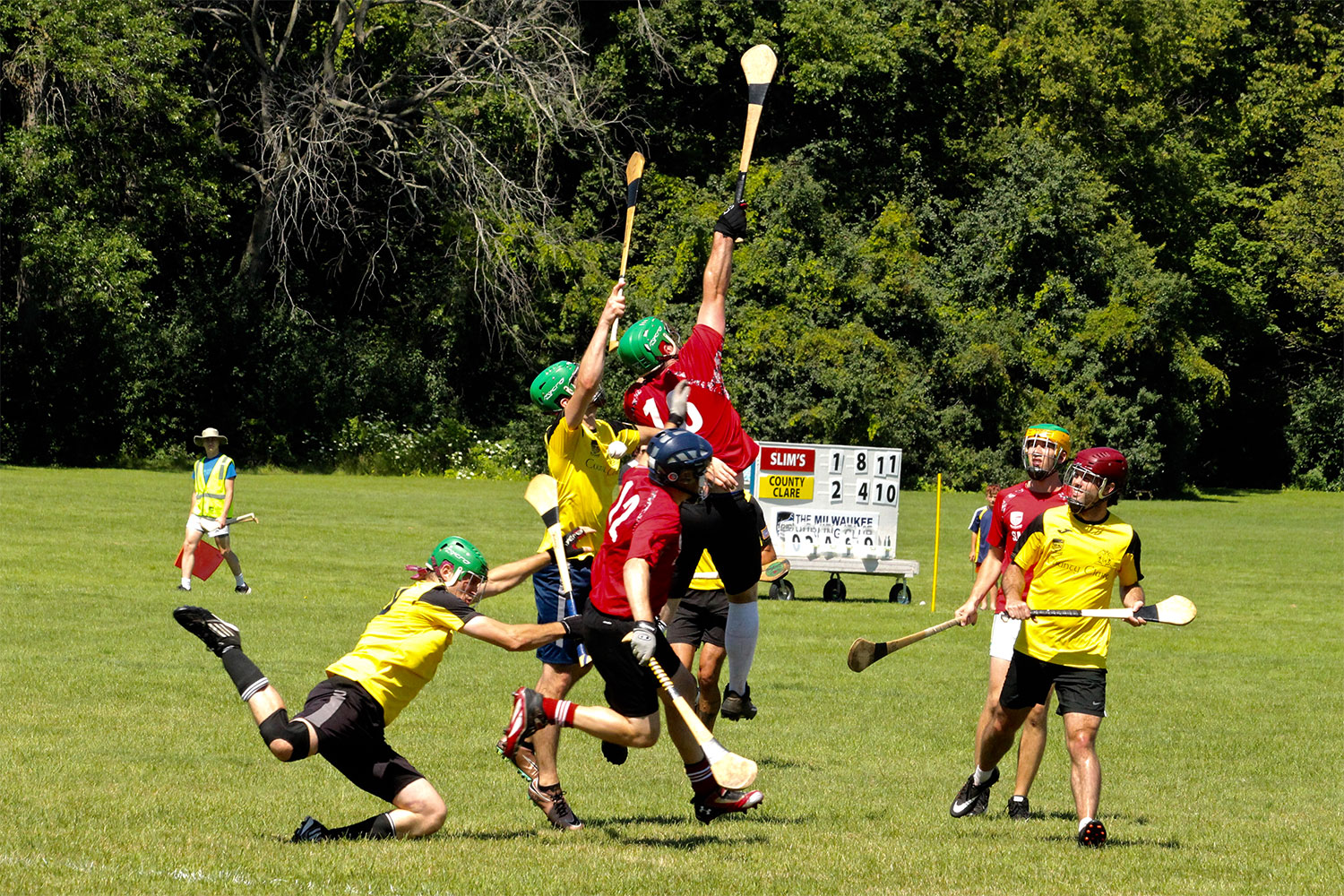 Suddenly, from people I had known for years to people I hadn’t even met but were now really excited to chime in, I received a variety of explanations: It’s like baseball without the boring! It’s like soccer if everyone has bats! It’s like if field hockey and lacrosse had a love child! It’s rugby but far more elegant (sorry, rugby fans)!

What’s more, the game can be traced back more than 5,000 years, which gives it a longer history than the Mesoamerican Ullamaliztli, or even that lawn-bowling game the Egyptians played. Invented by Gaelic warriors looking to maintain their sword skills between battles, it was brought to the States by millions of Irish diaspora during the Great Potato Famine. (As befits a sport of such heritage, the Blarnic details of this folk history are both fantastic and impossible to verify, but are all the more interesting when you believe them to be true.)

“Wait! Some nomenclature is needed to really understand,” they said. The ball is called a “sliotar,” and it’s essentially the size of a baseball but stitched inside-out. The stick is called a “hurley,” spelled exactly like the popular surfing and skateboarding outfitter (or the seat of Iron County, for all my Northwoods readers). The stick is also often called a “shillelagh” by American tourists in Dublin who enjoyed their Jameson tour a little too much. 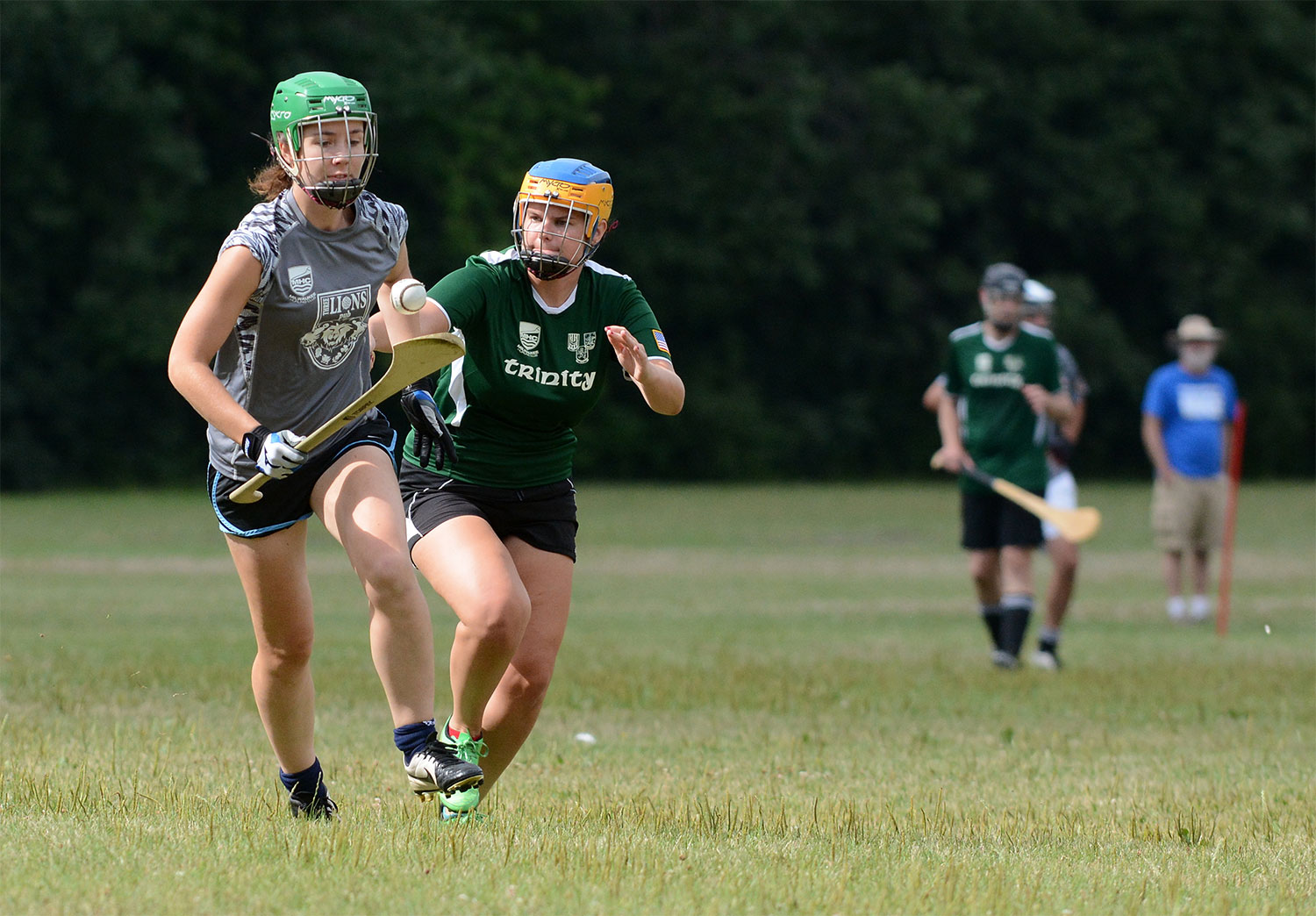 Now for some basic rules. Like soccer, there are goals on opposite ends of the field. Like rugby, there are uprights on both vertical posts. Hit the ball over the bar to score one point; put the ball in the net to score three points. Players can (and often do) score from anywhere on the field, but it’s increasingly difficult the farther away from the goal you try. No player may hold on to the sliotar for more than four steps or four seconds, whichever happens first. Players must strike the ball (throwing is not allowed) with the hurley—or a hand, or a foot—to another player. If the ball goes out of play because of the offense, the goalie immediately gets to “puck out” the ball into the field of play. If the sliotar goes out of play after last touching a defender, the offense is offered a chance to score from 65 yards away. In either case, the ball is immediately put back into play and is always in motion, which is why hurling has gained its reputation as the “fastest game on grass.” 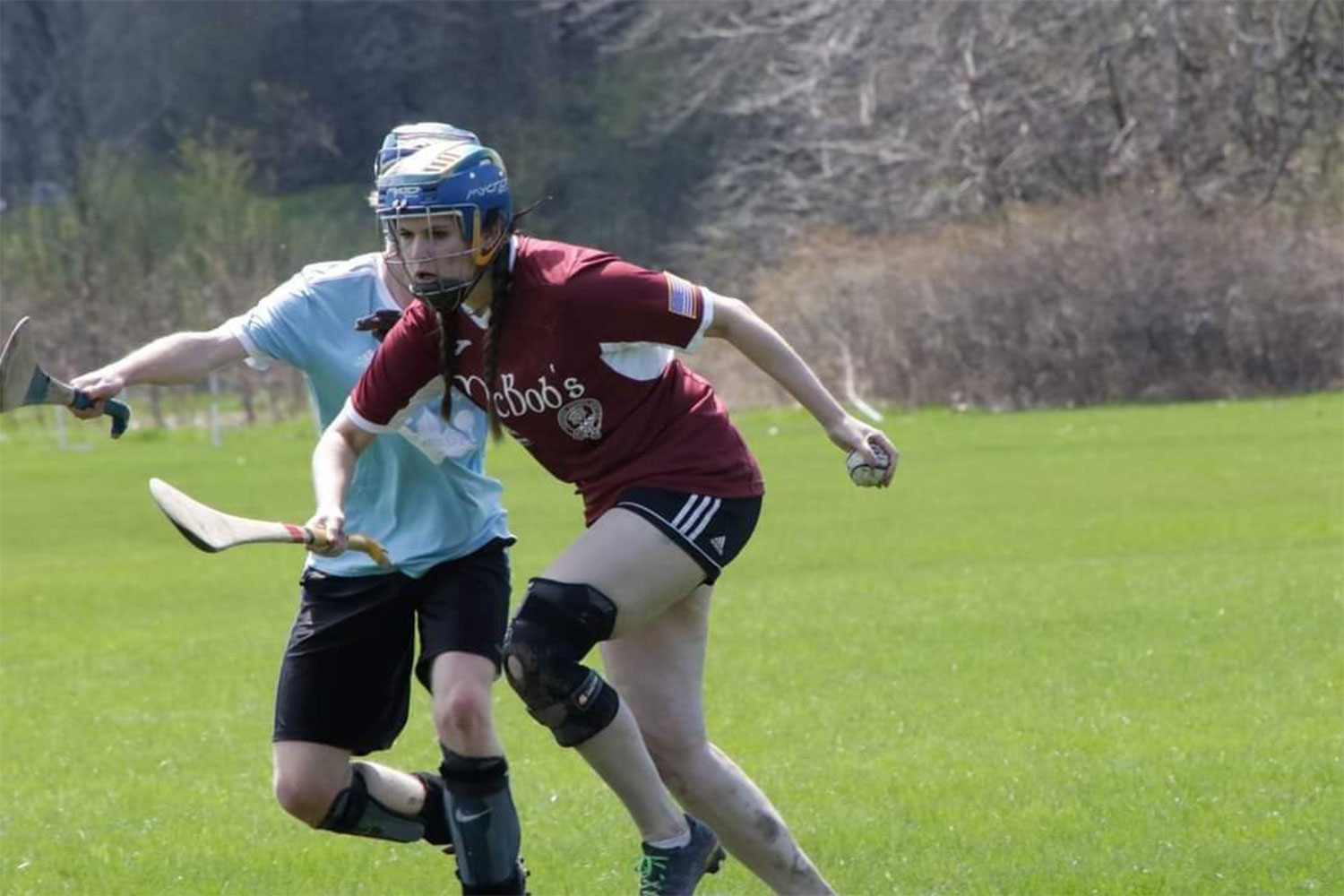 The very next week I had a stick in my hand and cleats on my feet. I had completely forgotten about soccer and began my journey in a new and exciting sport. Five years later, I’m still hand passing, pointing, and yelling “hook ’em” like it’s the most natural thing in the world.

There are hundreds of people in Milwaukee with a similar story; that is the ongoing legacy of the Milwaukee Hurling Club, a group of (largely non-Irish) people with a passion for an “unconventional” Irish game. But if this is the first time you’ve ever heard of hurling, I don’t blame you at all. (If you’ve heard of hurling, but thought it was curling, you’re also not alone. There are a lot of those. But quit it.) 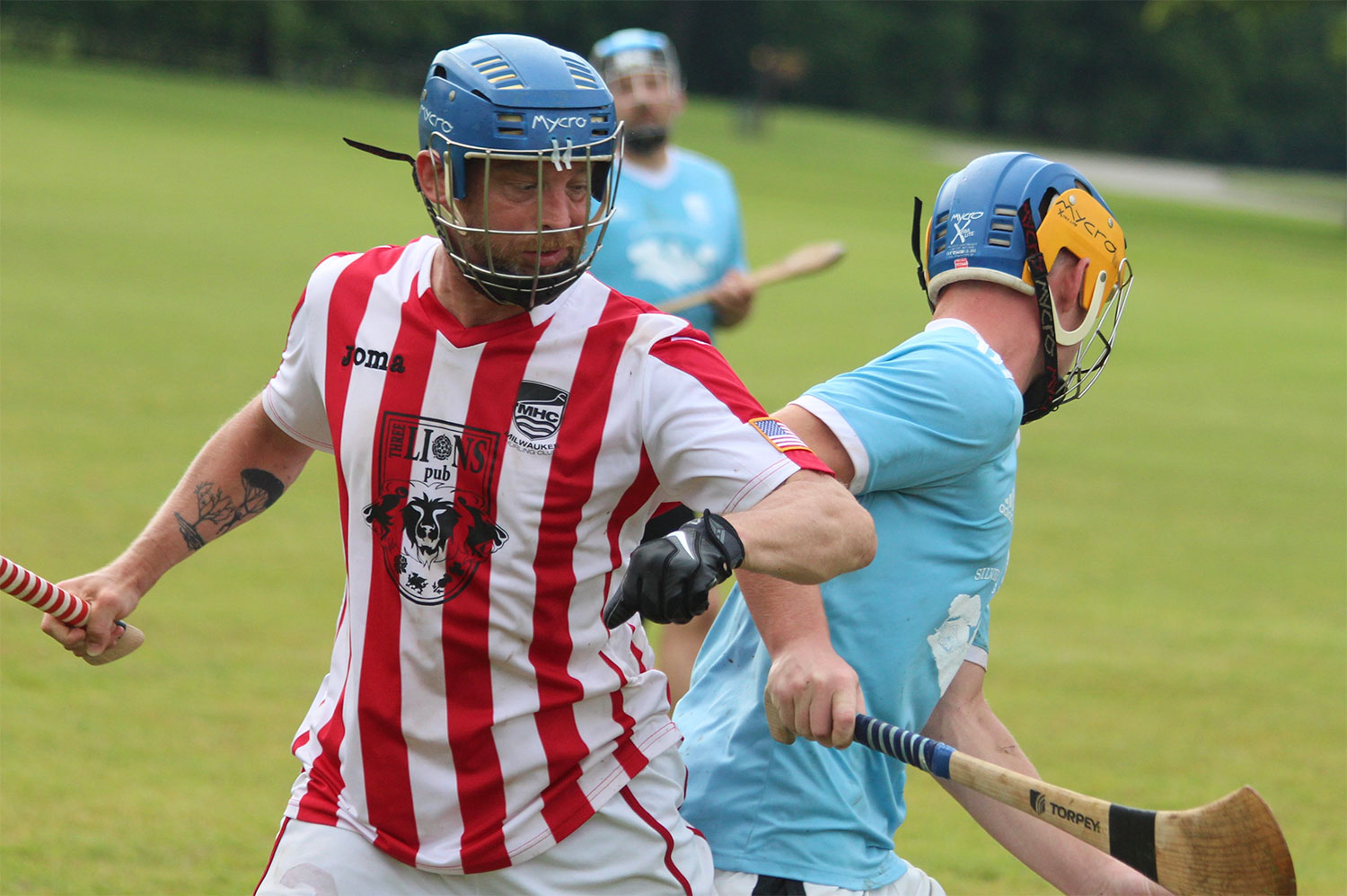 With all of the Irish culture we share in, with all of the hurleys mounted above bars in local Irish pubs, with the namesake of the Milwaukee Bucks’ arena also sponsoring a professional team in Ireland, it’s surprising that hurling is somehow simultaneously one of the most popular and most obscure team sports. Hurling remains sport’s Best Kept Secret. Like Fight Club‘s Project Mayhem, you likely know someone who plays, you just don’t know it yet. 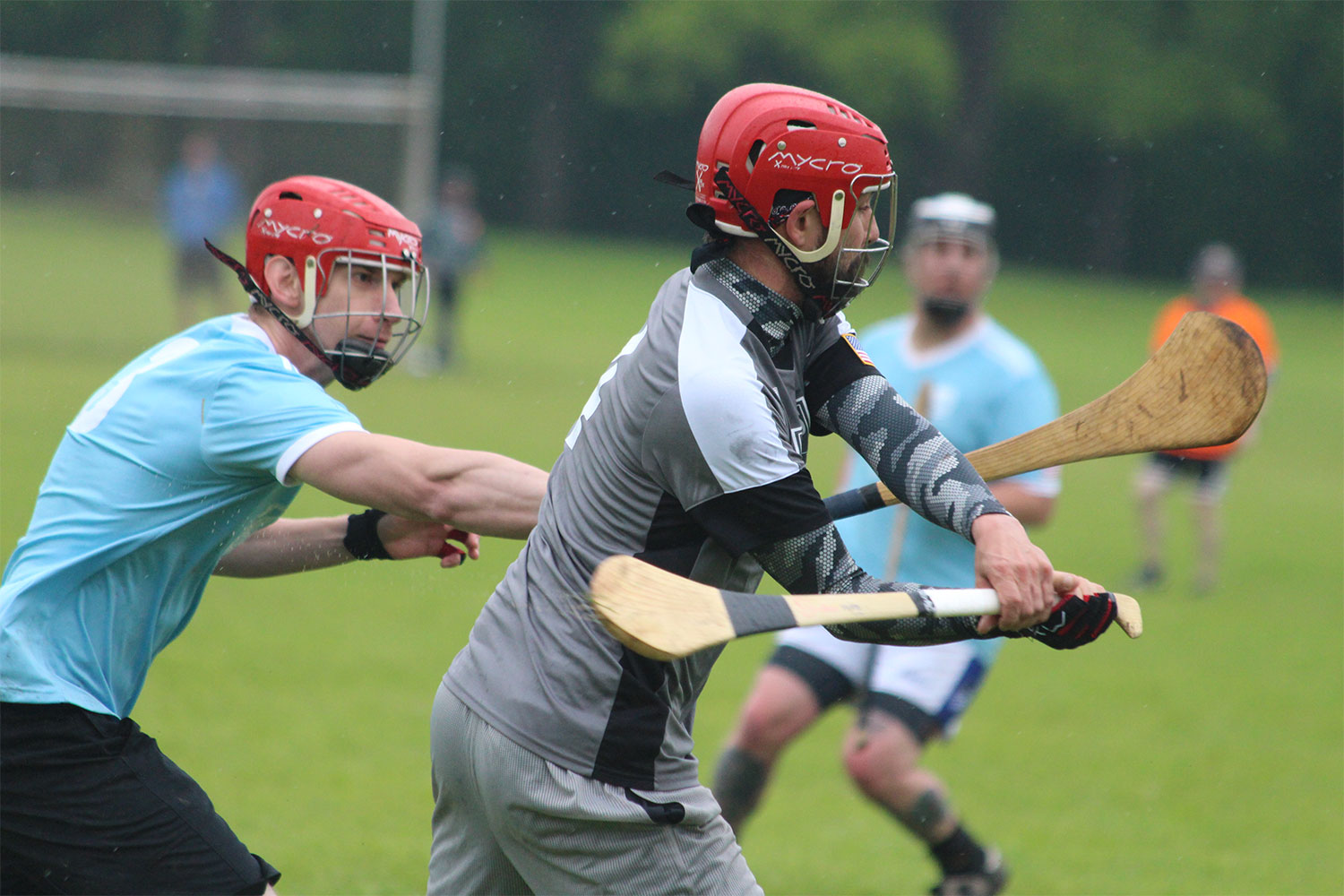 Every major city in the country, and even many smaller ones, has a hurling club. As would be expected, Boston and New York have a whole bunch. So, too, Chicago, San Francisco, St. Louis, Minneapolis. Even Madison has one. But Milwaukee’s club is unique. The Milwaukee Hurling Club is the largest of its kind in the world (outside of Ireland, that is), a label it can claim due to its unique membership strategy.

While most clubs affiliated with the USGAA (the Gaelic sport’s governing body in America) exist purely to compete nationally (many are composed exclusively of Irish nationals who have been playing since before they could walk), the MHC invests a considerable amount of time and effort to embrace newbies. Milwaukee has an amazing traveling team, bringing national championships home for pride and bragging rights for the past 25 years. But what makes MHC the largest, and dare I say the best club in the country is its willingness to develop the skills of all players, regardless of starting point. To improve their game and, by extension, that of the entire club.

Because it has so many similarities to other sports, skills from those sports tend to be transferrable. Transplants from lacrosse and baseball tend to have the greatest immediate success, but those who come from sports such as tennis or golf also have eminently applicable skills. 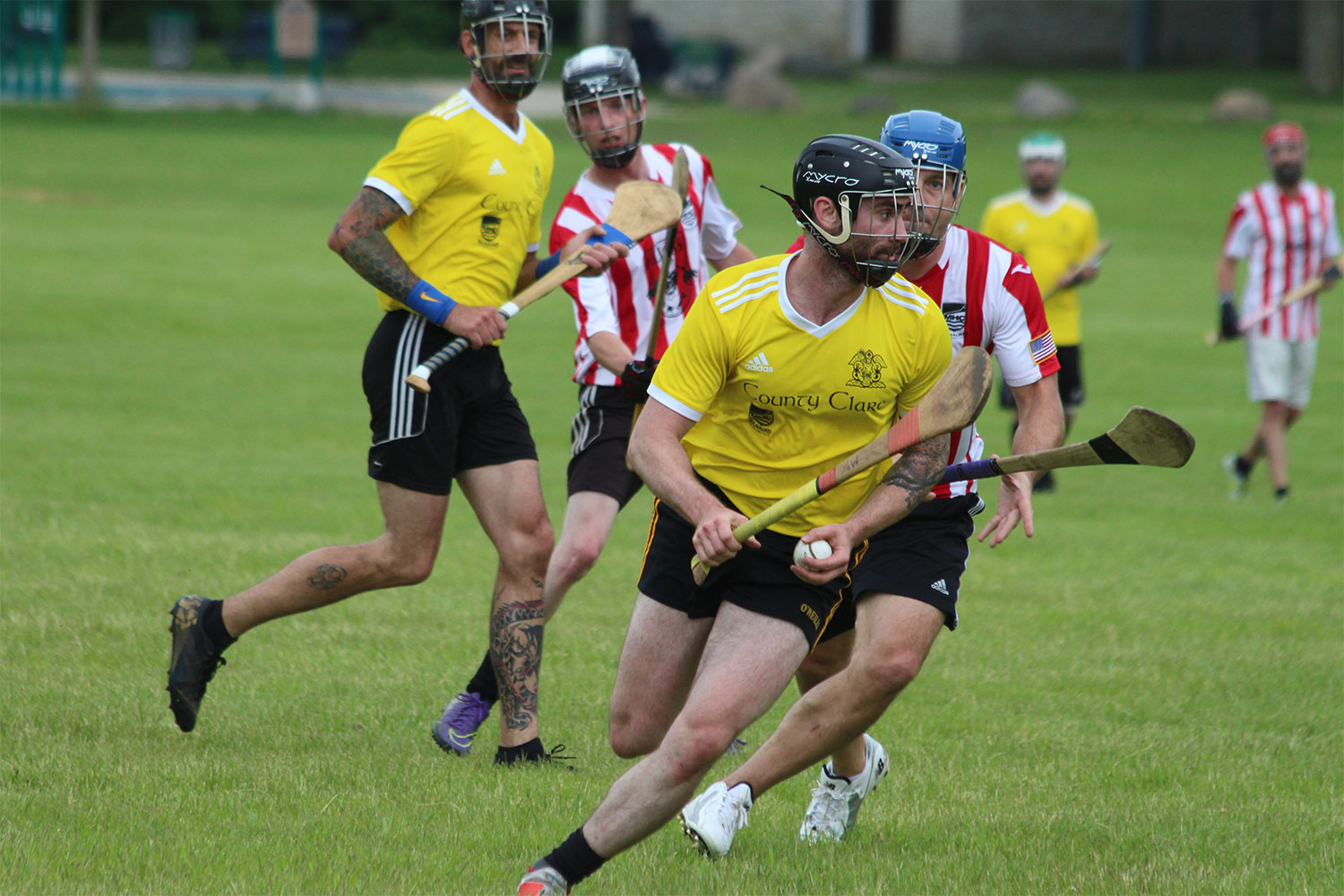 Anyone of any level of skill, of any level of cardiovascular endurance, can find some element of the game that they can do better than anyone else. As long as you’re willing to learn how to play, you can find your niche in the league and excel. And the club is more than willing to help you reach that level through a combination of helpful mentorship and friendly competition.

Similarly unique to the MHC: every team is sponsored by a local business, many of them by your favorite iconic Irish pubs (County Clare, O’Lydia’s, McBob’s), social organizations (Shamrock Club), and restaurants (Spitfire’s On State). Rosters are reshuffled every year with new players, so over the course of a few years everyone has the opportunity to become a teammate with nearly everyone else. This engenders a sense of camaraderie among opposing teams, where the competition of the moment falls away to the shared identity of the club as a whole. While team sports are inherently a “them vs. us” proposition, at the end of the day everyone belongs to the same organization. It’s that which maintains the sense of fair play and sportsmanship that the club always aims for. 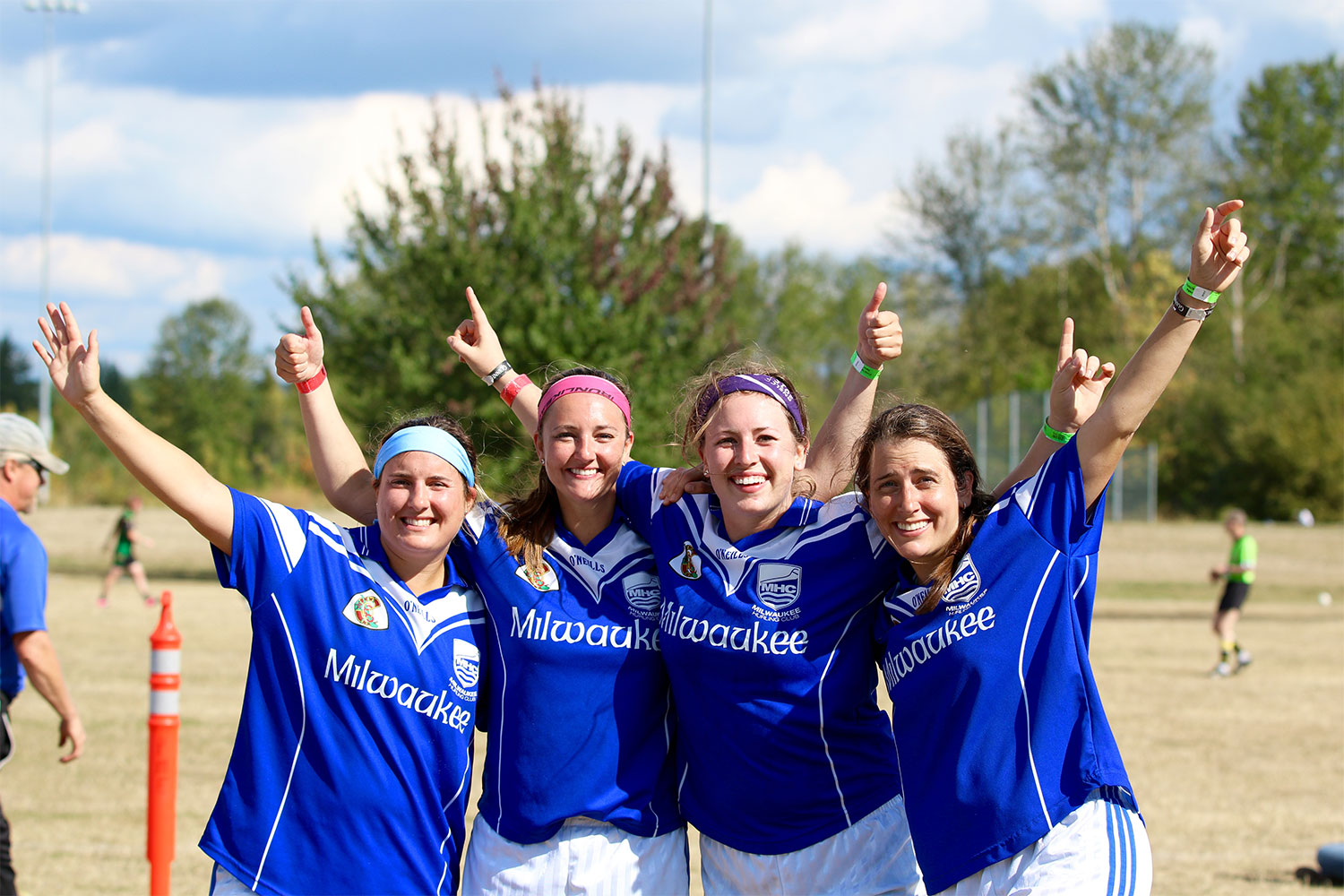 Not sold yet? Here are some reasons why other members of the MHC love the sport:

“I was introduced to hurling through one of MHC’s many community events: the Brady Street Festival. I saw the hitting tube in the fall of 2016, tried it out, and remembered loving it! So when the spring of 2017 rolled around, I had just transitioned in my life and was looking to get back into team sports, as I had played soccer all the way through college. I remembered hurling from the festival, looked up their website, and realized that that exact day was the deadline for the 2017 season’s registration! It felt like fate, and I’ve never looked back. The MHC is my summer family as much as they are a way to remain active.

“This year, I moved from full back (a defensive position) to full forward (an offensive position). Initially, I was so nervous to be so close to the goal that I had a panic attack and ended up hyperventilating up a dandelion! But with the support of my team and my own dedication to feeling better about the position, now I truly relish being in an offensive position, and I’d say that I far prefer it now. If you had asked me at the beginning of this season, I would have said I would only ever be happy being a defender! It’s amazing how support and time can change one’s mind.

“I think for me, my favorite part of the sport is in two parts: what I love about the sport itself, and then what I love about the club. What I love about the sport is that it gave me the opportunity to be active in my adulthood, when it can be all too easy to become inactive. I love how anyone of any level and come out and learn the game and end up making moves or participating in plays that can end up being game-defining moments. And, most of all, I love the people that this sport has attracted. When I say that this is my summer family, I genuinely mean it. Now, as far as the club specifically goes, I love how many opportunities there are within the club to be active. I am a youth coach, a sponsorship chair, as well as helping organize the off-the-pitch social opportunities (which we call our Culture Club). The MHC provides me with opportunities that I can then take into my real life as genuinely marketable skills.”

“Introduced to hurling through Irish Fest, this ancient Irish field sport has been my favorite since I was little. To me, County Clare has the best Round Robin; it’s the coziest and has my favorite food.”

Brian Marsolek, half forward, player since 2003

“Hurling is ‘the grandfather of all sports.’ I found the club through Irish Fest when I was nine years old. The hitting tube looked like a lot of fun to a kid in little league. I mainly play half forward. Lots of running, lots of scoring. Hurling really brings in a lot of skills from a lot of varied sports: baseball, soccer, football, hockey, lacrosse, etc. Because of that, it’s an easy sport for people to get into; you have a lot of different people playing. Having all those skills mesh together, it’s a beautiful game to watch. My favorite Round Robin event is definitely McBob’s Taco Eating Contest. A good chuck of the club comes out to one of our longest-running sponsors to eat one too many tacos in solidarity with one another.”

Alecks Kim, half back, player since 2021

“I’ve been playing for a year and a half now after stumbling across the booth at Irish Fest in 2019. I’m most often half back or half forward, on one of the sides. What I like about hurling most is participating in a sport that has survived for so long. If I had to explain the sport to someone in five words or less? ‘Small balls hit across acres.'” 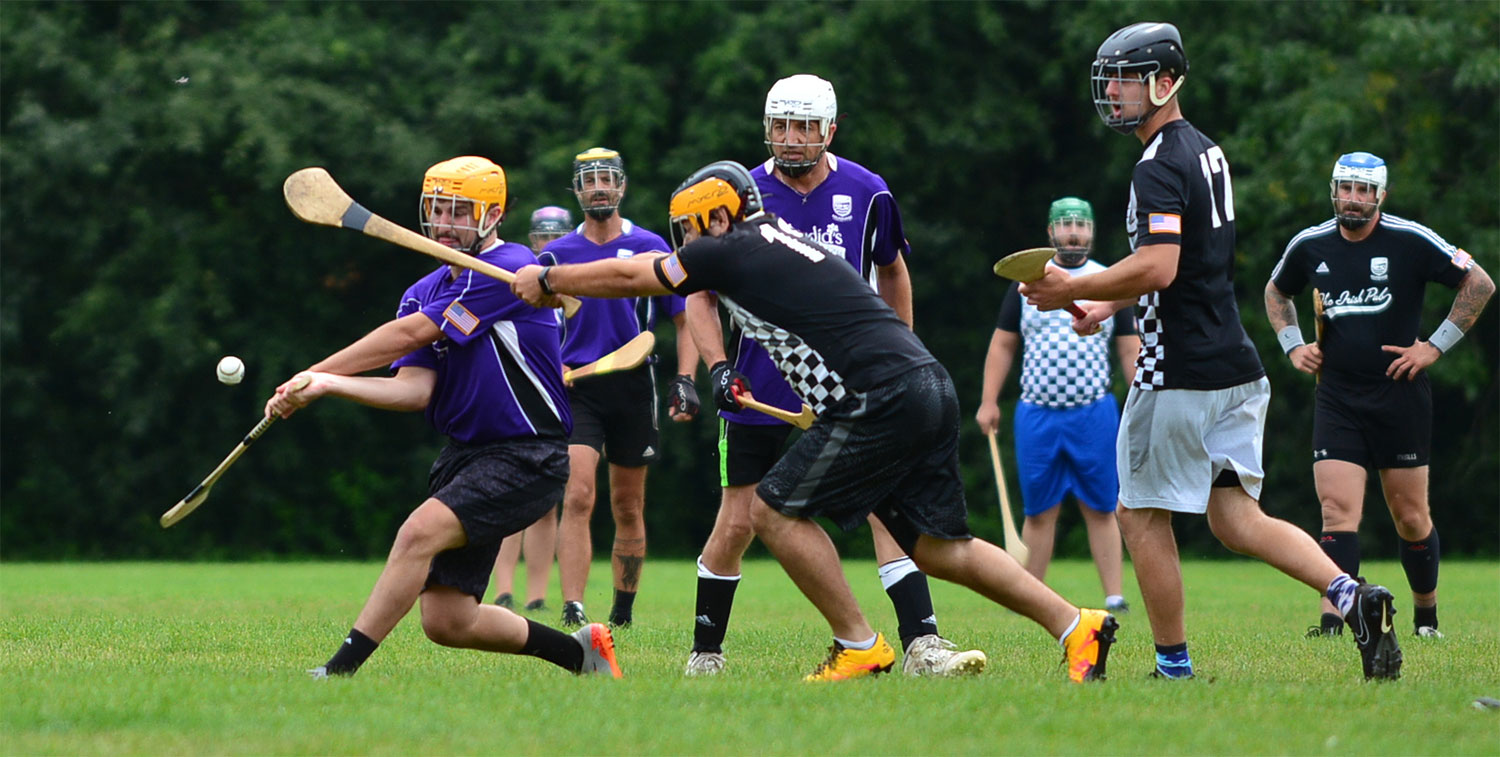