Depending on which news sources you follow, Milwaukee is going through either a “renaissance” or a “reinvention.” Or maybe it’s a “reboot” or a “reimagining,” like that crappy Tim Burton version of Planet Of The Apes. However you want to define it, it’s safe to say that Milwaukee is currently building a lot of (hold on to your monocles, everyone who complains about this column every other week) new shit.

• Want to live in the tallest mass timber building in the world? NOW YOU CAN. IN MILWAUKEE. Yes, pre-leasing has begun for the soon-to-be-constructed Ascent building, located at 700 E. Kilbourn Ave. The 25-story, 265-until luxury tower will boast a pool, sauna, steam room, entertainment center, top-floor decks, fire pits, grilling stations, and more. New Land Enterprises is behind the record-breaking mass timber wonder. (“Topping out at 283 feet, the building would surpass the 280-foot Mjos Tower in Norway,” says Urban Milwaukee.)

Construction is set to begin “in the coming months,” and will take nearly two years to complete. Pony up a refundable $500 fee and reserve your unit today! [Urban Milwaukee]

• Want to know how much you’ll pay in rent if you’re selected to live in the tallest mass timber building in the world? According to the Milwaukee Business Journal:

Ascent would be in the upper end of the apartment market, with rents starting at $1,610 for a 573-square-foot one-bedroom unit. Two-bedroom units start at $3,245. Its highest-priced unit, a 24th-floor penthouse with about 2,000 square feet and three bedrooms, starts at $8,500 a month.

And before you ask “WHO CAN POSSIBLY AFFORD TO LIVE IN THESE THINGS?” know that more than 160 people have already signed up for pre-leasing information as of last Friday. [Milwaukee Business Journal]

• Want to live in that six-story, 144-unit apartment building on the northern edge of Bay View? You know, that colorful, almost-complete building that will likely be haunted by the ghost of the old Hamburger Mary’s that used to be there? NOW YOU CAN. Leasing information is available for the so-called Kinetik building, located at 2130 S. Kinnickinnic Ave. (And yes, New Land Enterprises is behind this one, too.) Rent will run you anywhere from $1,150 to $2,375 per month. [Urban Milwaukee] 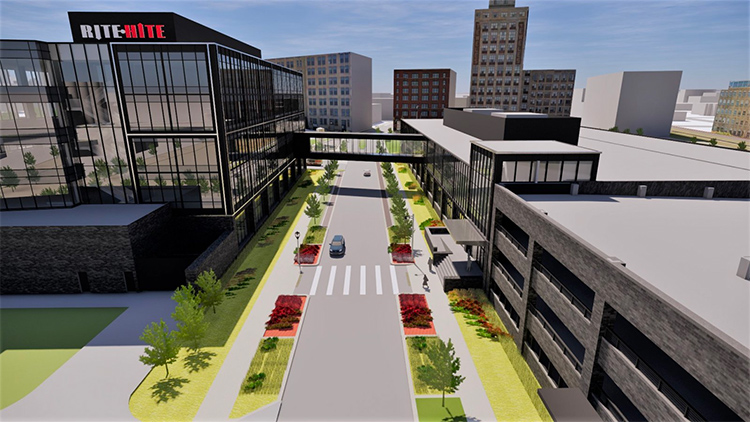 • Since it’s a scientific fact that dogs love hanging out underneath freeways, Milwaukee is building a dog park underneath a freeway. (And no, the site isn’t where the “Tent City” homeless encampment used to be.) [Urban Milwaukee]