Late last week, Milwaukee Journal Sentinel business reporter Tom Daykin broke the news that The Spot 4MKE, a highly touted “placemaking” project from Creative Alliance Milwaukee, had been put on “indefinite hold.” The Spot had sought to “activate” a portion of a disused downtown parking lot on the corner of N. 4th St. and W. Wisconsin Ave. with colorful picnic tables, food trucks, live music, and other activate-y activities. The project had been funded by a $100,000 grant from Southwest Airlines, and $100,000 in in-kind assistance and technical support from New York-based placemaking group Project for Public Spaces. Unfortunately, despite a handful of events and the benefit of, you know, $200,000, The Spot was shelved due to “fundraising trouble.” According to the Journal Sentinel, the city chose not to renew the project’s lease, which expires April 30.

The Journal Sentinel gives a straight-faced but vaguely dour assessment of The Spot (“Plans on hold for activities at 4th St. & Wisconsin Ave. site,” goes the nuts-and-bolts headline). It notes the Milwaukee Downtown Business Improvement District declined a request from the Wisconsin Avenue Milwaukee Development Corp. to take over operations of the project, and that the parking lot has been “the site of some failed hotel proposals dating to the late ’90s.” The future development potential of the site—real development potential, one infers—is also given as a reason for the project’s untimely demise. All in all, the less-than-year-old Spot comes across as a failure.

But fuck that, because according to the Milwaukee Business Journal, The Spot 4MKE was a rousing success 4MKE! The publication ran its own story on the mothballed project over the weekend, one with a decidedly optimistic slant. “West Wisconsin Avenue parking lot generating developer interest” blared the headline. The lede, from reporter Sean Ryan, was just as sunny:

Developers are taking a renewed interest in the city-owned parking lot at Fourth Street and West Wisconsin Avenue, building off of last year’s place-making initiative on the land and a broader revival of that part of downtown Milwaukee.

“It’s a great location and I think we’re at a point where Fourth and Wisconsin could actually get a development that merits the location,” says city development commissioner Rocky Marcoux in a month-old quote. The Spot’s untimely end isn’t mentioned until the fifth paragraph.

Per the Journal Sentinel, any renewed interest in the space is due to the recent sale of the Shops of Grand Avenue. The Business Journal, on the other hand, claims The Spot “helped call attention to the area,” and stresses that CAM “may try [the] same concept elsewhere, and […] replicate other successful programs tested at The Spot.” “It turned from being a parking lot to become a corner of community activity,” CAM Executive Director Maggie Kuhn Jacobus says.

So was The Spot 4MKE a boon or a bust? The truth, as always, probably resides somewhere in between. Urban Milwaukee writer Jack Fennimore has done a good job of documenting The Spot’s sometimes-rocky existence over the past year, noting its unveiling “was modest at best, with only a handful of things to do and see,” and that “the space is slow in catching on, drawing only a good handful of people with each event.” Meanwhile, the Business Journal has spent the past year covering CAM and The Spot in an overwhelmingly positive light. “Why are companies moving offices downtown from the suburbs?” a headline asked last June. In part because of The Spot. Why are more people hanging out on Wisconsin Ave? The Spot, of course.

Personally speaking, the space was almost always empty every time I passed it (several times a week, usually during my all-too-frequent trips to the Grand Ave.) It also seemed to fall into the same “lipstick-on-a-pig” trap that plagues so many “placemaking” projects: No matter how many picnic tables you toss up, no matter how many trees you wrap in crepe paper, and no matter how brightly you chalk the asphalt, you’re still stuck with a big, ugly parking lot. And nobody wants to hang out in a big, ugly parking lot.

Not that the site has been completely devoid of activity. Both the Journal Sentinel and the Business Journal mention the continued success of NEWaukee’s Night Market, which takes over the parking lot and surrounding area four Wednesdays out of the year. (This year’s Night Markets are scheduled for June 15, July 13, August 17, and September 14.) The difference, it seems, is that NEWaukee has an actual vision for its events, while CAM had little more than a parking lot and some out-of-town consultants. And $200,000.

And that’s the real story here: all those funds and resources down the tubes in less than a year. A noble experiment, perhaps, but where’s the accountability? Maybe, as Kuhn Jacobus suggests in the Business Journal piece, CAM can walk away from The Spot with “completely transferable knowledge and experience.” But is that “better-luck-next-time” knowledge and experience worth $200,000? Neither the Journal Sentinel or the Business Journal can say. 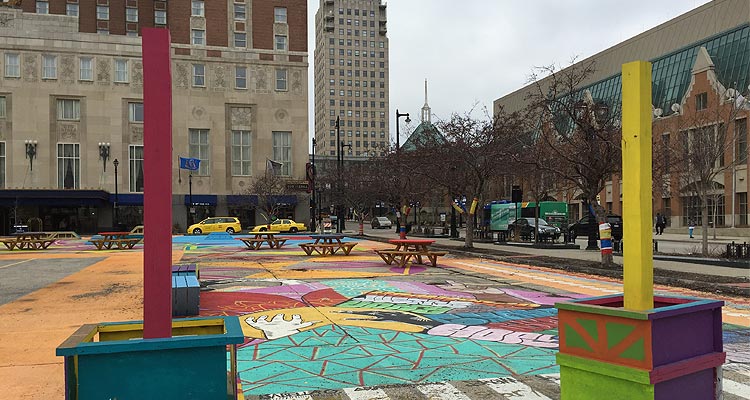