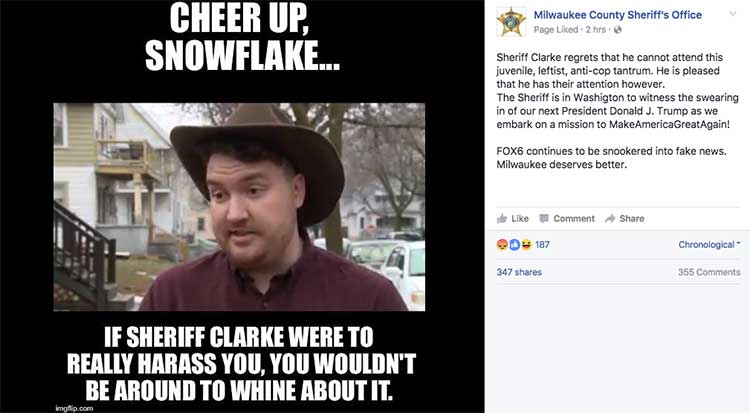 In case you missed Clarke’s threat to murder someone:

“Cheer up, snowflake. If Sheriff Clarke were to really harass you, you wouldn’t be around to whine about it.”

The rest of the post, which references Friday’s planned protest march by the Milwaukee Coalition Against Trump, reads:

“Sheriff Clarke regrets that he cannot attend this juvenile, leftist, anti-cop tantrum. He is pleased that he has their attention however. The Sheriff is in Washigton [sic] to witness the swearing in of our next President Donald J. Trump as we embark on a mission to MakeAmericaGreatAgain! FOX6 continues to be snookered into fake news. Milwaukee deserves better.”

The person pictured in the “I’m going to murder you” meme is Dan Black, a 24-year-old Milwaukee man who filed a formal complaint against Clarke on Tuesday. Over the weekend, Black was on the same flight from Dallas to Milwaukee as Clarke. Black asked Clarke, who was decked out in Dallas Cowboys gear, if he was indeed Clarke. Clarke replied that he was. Black then shook his head and walked away. Upon landing at Milwaukee’s General Mitchell Airport, Black was met by “six uniformed deputies and two bomb/drug dogs” and escorted from the premises.