Last week, before Sunday’s playoff game against the Green Bay Packers and the Dallas Cowboys, Milwaukee County Sheriff David Clarke did what he does best and lazily trolled the state of Wisconsin by coming out as a Cowboys fan and predicting a Cowboys win. “Cowboys are going to win,” Clarke told NRATV. “They match up better. They’re physically stronger than the Green Bay Packers. It’ll be a good game. Cowboys are going to win.” A Twitter feud between Clarke and Milwaukee County Executive Chris Abele ensued, with Clarke feigning surprise that Abele preferred football over badminton, because that’s how things work now.

But there’s more. On Sunday, a 24-year-old Milwaukee man, Dan Black, found himself on the same flight from Dallas to Milwaukee as Clarke. In a widely shared Facebook post, the freelance videographer details what happened next: 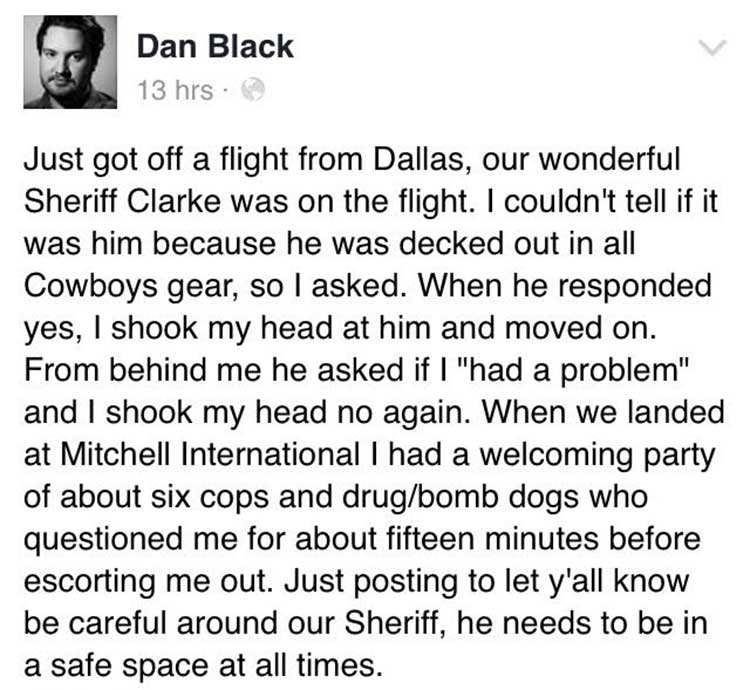 Now, Black has filed a formal complaint with Milwaukee County against the sheriff. It reads:

On Sunday, January 15, 2017, I flew from DFW to Milwaukee on American Airlines flight 1534 at 12:20 p.m. As I was boarding, I saw an older man in first class who looked like Sheriff Clarke, but I could not be sure as he was dressed in Dallas Cowboys gear and wasn’t wearing his signature cowboy hat. As I passed him, I asked if he was Sheriff Clarke, and he responded in the affirmative. I shook my head as I was moving on to my seat near the back of the plane.

From behind, he asked if I had a problem. I shook my head “no” again and continued to my seat. I was surprised that he was wearing Dallas Cowboys gear, as I hadn’t seen the media stories about his Dallas fandom (I have since seen them). I intentionally did not say anything more to him because I did not want to make a scene or get in trouble as a Milwaukee man did in September when confronting Clarke on an airplane. I just moved on and took my seat.

When I exited the flight at Mitchell International, there were six uniformed deputies and two bomb/drug dogs standing there with Sheriff Clarke waiting for me to exit. As soon as Sheriff Clarke gestured towards me, he and some of the officers left us. I was very publicly escorted in front of everyone down the hall to a waiting area, and then questioned by two of the Sheriff’s Department deputies. They told me Sheriff Clarke said I had made some remarks to him upon entering the plane. When I asked for clarification, the deputies said they couldn’t tell me, and when I asked if they even knew the context of my “remarks,” they responded “no.”

After questioning me for about fifteen minutes, asking me who I was, why I was in Dallas, what my views of Sheriff Clarke were and essentially treating me as a threat, they escorted me all the way out of the airport in front of everyone there. I was walked through the terminal, down through baggage claim, and all the way to my friend’s car by the officers. I was not given the opportunity to use the bathroom, to stop for a coffee, or to browse the bookstore. It was clear to the deputies after their interrogation that I hadn’t done anything (let alone done anything wrong), so I was confused as to why I needed to leave the airport directly. It turns out that as my friend drove me out of the arrival area of the airport, I saw Sheriff Clarke surrounded by officers looking up the road where I had come from. He apparently needed to see that I was leaving the airport.

It is deeply embarrassing and frightening to be surrounded by police officers, treated like a criminal under any circumstances, but especially so in a secure public area such as the airport. I literally hadn’t done anything wrong, but I was treated as a threat and I was detained. Afterwards, I was in shock and couldn’t speak for half an hour. My detention and this interrogation was entirely unwarranted. Although the event did frighten me, I will not be intimidated into letting this egregious act go unreported. The deputies who interviewed me agreed, the stop was “stupid” and “ridiculous.” There was absolutely no basis for this incident, and I believe I was the victim of the sheriff’s abuse of power.

The previous Clarke/airplane incident happened in September 2016, when a man was arrested and charged with intoxication and disruptive behavior after “berating” Clarke on a flight from Milwaukee to Charlotte, North Carolina.

The Packers, FYI, beat the Cowboys on Sunday.