When he isn’t teaching metro Milwaukee’s youth, drumming in Winter Bear, or hanging out with Public Enemy, Corey Baumann spends his summers getting exercise and making some extra money as a Milwaukee Pedal Tavern driver. He’s been guiding tours between downtown and the northern edge of Bay View since 2012. During his time on the job, he’s watched the awareness (and the varying opinions) of the Pedal Tavern grow, has seen his fair share of memorable trips, and has watched the polarizing attraction single-handedly save a Walker’s Point bar from extinction.

With Pedal Tavern season now in full swing, we asked Baumann—one of the service’s longest-tenured drivers—how he landed the unconventional job, what type of feedback he gets from people, and about standout moments from his seven-plus summers behind the wheel of this 16-seat mobile bar.

Milwaukee Record: When did you begin doing this and what led to you wanting to be a Pedal Tavern driver?

Corey Baumann: I got married Memorial Day weekend in 2012, and my wife and I got engaged when we were on a bike ride from Milwaukee to my aunt and uncle’s house in Michigan. So when we set up the wedding, we wanted to have rickshaws take us around, but based around our budget, we realized we couldn’t really swing it. Then I realized I went to high school with the owners of the Pedal Tavern. They were a few years behind me, but we knew each other from growing up in the same neighborhood. I called them and got a Pedal Tavern for our wedding party.

That was my first experience on a Pedal Tavern. At the time, there were only a couple bikes, so it was relatively new. I went on it and it was awesome. We had a blast. Later, they gave me a call to see how the tour went. I told them it was awesome and said if they ever needed a driver, they should let me know. I teach, so this was something I could do in the summer. They said to hit them up after my honeymoon, so I did and here we are. It was kind of a unique way for me to get into it, but yeah, this will be my seventh summer.

MR: At that point, it was a newer thing in Wisconsin. It very quickly became a thing where people developed an opinion on it. Was it weird watching that happen and hearing some of the negative feedback pop up as Milwaukee adjusted to this new thing?

CB: Yeah. Every time I go on tours, I’d would say 95 to 98 percent people who go by and honk and wave are generally into it. Every now and then, you’ll go by a restaurant with a patio and people sitting outside will give you the finger. I just wave to them and say hi. 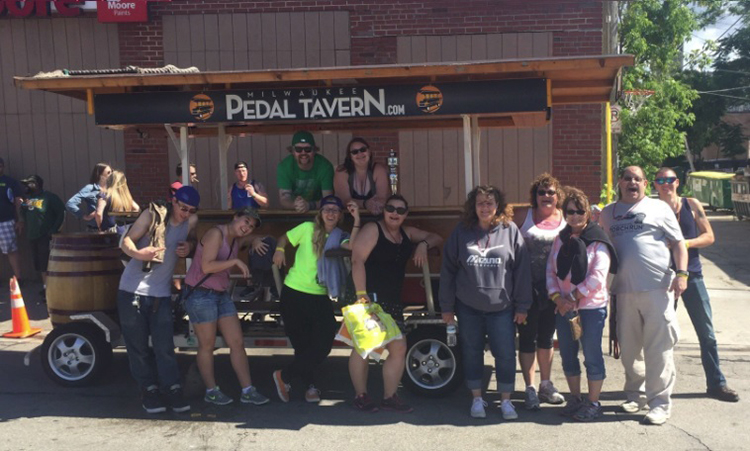 MR: Have there been any over-the-line interactions you’ve experienced or heard about?

CB: Not really. I mean, you’ll get the finger every once in a while. You’ll get happy beeps, but you’ll also get that long beep, where you can just tell they’re not happy with how you’re driving or they’re mad that you’re holding them up. I think the city, especially the downtown area, seems to embrace it pretty well. We try to talk to bartenders and make sure they’re cool with it.

MR: On the subject of bars being into you stopping, I had read an article about how Pedal Tavern essentially saved George’s by making it a part of most tours.

CB: Derek [Collins], the owner, was just driving around looking for new places to take people, and Water Street just kind of ends there and circles around. I think he was just like, “There’s a bar here?” He couldn’t believe it. He stopped in and asked if the Pedal Taverns could stop by. George was way into it. He said they’d give it a shot, and before long, it became a destination. He always gives out beads and raffle tickets and different beer vendor swag. People love it, and it really started picking up business for him. He’d said he thought he was going to have to close the bar [before that].

Before we showed up, he thought he was only going to have a year or two left before retiring. This gave him a new lease on life. He’s there pretty much every tour. I’d say the upper 90 percent of tours stop at George’s at some point along the way. The ones that don’t have done it before and want to try something new.

MR: That’s one case of it helping, but do you think Pedal Tavern as a whole is a bigger helper to local businesses than a deterrent?

CB: I think so. We do three stops per tour. When we get busy on Saturdays, there are 35 tours that go out. So you multiply that by three stops, and that’s like 900 stops with 15 or 16 people on board that are all going in and buying a drink. You’re in and out in 20 minutes, so you’re giving bars money pretty quick. I can’t imagine how it couldn’t help local businesses.

MR: Well, the one way is if a wave of passengers come into a place, are rowdy, and drive customers away. Is there any etiquette you recommend or stuff in the manual to prevent that?

CB: It’s rare, but every now and then people will be drunk and might yell at someone who beeps or drives by, and I just remind them to be friendly to people. We’re not out here to try and cause disagreements. I tell them that we’re all out here to have fun, so try to have fun. After you get off the bike, nobody will know where you came from, but [Pedal Taverns are] seen everywhere.

As far as other etiquette, we tell people not to jump off the bike when it’s moving. People do lose their phones, people lose their shoes. We’ll pull over and you can retrieve it safely. Sometimes drunk people don’t think, so I try to make that very clear.

MR: Have you had any especially memorable rides? Have you seen anything weird or random or maybe over the line?

CB: I know somebody once made an attempt to climb on the roof while riding. That wasn’t my tour and it was in the really early stages of the Pedal Tavern. I know a tour tried to go through the McDonald’s drive-thru and McDonald’s wasn’t really into that too much. My most memorable tour was two summers ago when we were coming out of George’s and heading back to the starting point. Out of nowhere, it just started pouring buckets. I was with a bachelor party from Chicago and we were all soaked. They cranked up AC/DC’s “Thunderstruck” and started playing the “Thunderstruck” drinking game in the thunder and lightning. They were having a riot. Those tours where it storms are always pretty memorable.

MR: So there’s bachelor parties and bachelorette parties. The one time I went, it was with my mom and other people visiting from out of town. What’s the general clientele? Do you think it’s something locals do or something made for tourists?

CB: We have some repeat customers who generally do it once a year. I personally love it, but it’s not something I’d want to do every weekend. The allure would just wear off. We get a lot of groups from Chicago that come up. We get a ton of bachelorette parties and some bachelor parties. There are birthday parties and work outings. Marquette graduation brings tons of groups of families who come in and ride weekdays.

MR: When does the season start and how long does it go?

CB: It’s all weather-based, but we always do St. Patrick’s Day. It’s our unofficial announcement that we’re back in the streets. Then we always go through Halloween weekend. A lot of times, there might be a tour after that. Again, it all depends on the weather. But we’ve done at least one tour every month of the year.