• Black Cat Alley’s controversial “Devontay” mural is back in the news. Depicting a black man in an orange prison jumpsuit, the mural—located in a two-block alley on the East Side—is meant to critique the mass incarceration of black men in Milwaukee and across the country. But “Devontay” artist Adam Stoner (who is white) came under fire last fall when some critics deemed the image another “aggression,” and claimed they were “overwhelmed with disappointment at witnessing another black body ‘displayed’ as socially ‘undesirable’ no matter what the intent.” Now, Milwaukee Magazine did a fashion photo shoot in front of the mural.

In an article for the magazine’s September issue, a white model is seen posing in front of “Devontay,” sporting a dress made of zip ties. Says Clarene Mitchell of the Milwaukee Independent:

Considering this disparity, it is troubling to see a White model posed seductively in front of the mural. The details of the 4,000 plastic cable ties that make a geometric pattern in the minidress have no significance in contrast to the man with nothing but time on his hands that she stands before.

I’m not sure if the artistic director for the set design did this on purpose or out of ignorance. Nonetheless, it is a very disrespectful marketing approach in a city that is trying to move past being one of the most racially segregated in the country. 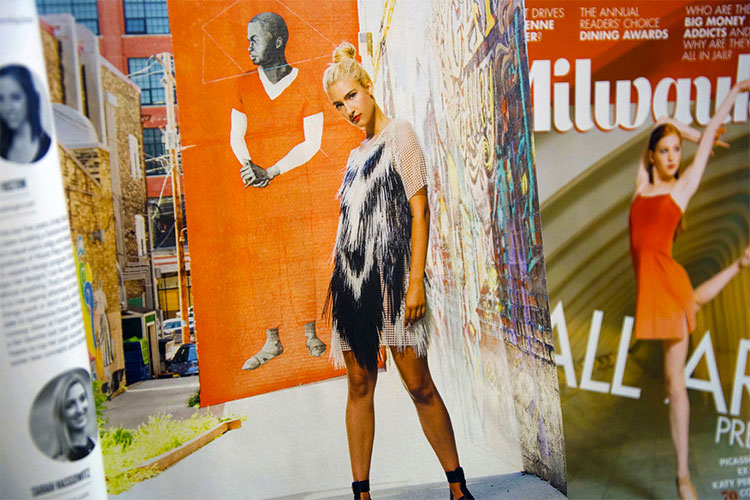 • If you’ve spent any time downtown lately, you know that Milwaukee is really going through with this streetcar thing. Construction is well underway, streets are blocked off, and the city is patiently awaiting the the influx of bus-adverse people who can finally—finally!—ride up and down Wisconsin Avenue via public transportation. Oh yeah, one more thing: the City of Milwaukee has finally picked someone to operate the thing: Illinois-based Transdev. (Republicans’ continued efforts to limit funding for the streetcar, meanwhile, “may have no effect on the project.”) [Milwaukee Journal Sentinel]

• Are you a big fan of Gypsy Taco at Boone & Crockett? Of course you are. Then you’ll also dig Gypsy Burger, now open on the patio of Rogues Gallery, 134 E. Juneau Ave. [OnMilwaukee]

• MillerCoors is giving away 15,000 free Brewers tickets for next week’s Brewers/Pirates series at Miller Park. The tickets are available online here. [BizTimes]

• The Violent Femmes announced a string of shows at small and mid-sized theaters, including a stop at the South Milwaukee Performing Arts Center October 20. Brett Newski will open the shows. [Shepherd Express]

• Iron Horse Hotel will celebrate its ninth anniversary next Friday with a “Burnout Bash.” [OnMilwaukee]