Though the name Alice Wilson probably doesn’t ring a bell and you’d have a tough time picking her out of a lineup, anyone who recently attended PrideFest, Polish Fest, NEWaukee Night Market, or any number of other outdoor celebrations in Milwaukee in recent years is almost certainly familiar with her work. In addition to acting and art modeling, Wilson makes her living as a “human statue,” who takes on characters like pirates and mermaids, Rosie The Riveter, a steampunk Mary Poppins, a cowboy, a court jester, among others.

With Wilson’s busy season in full swing, Milwaukee Record asked the city’s premier living statue about her unique job’s origin, challenges she faces, perks of the job, the state of Milwaukee busking culture, and how far she plans to take statue work.

Milwaukee Record: What led you to this? You see living statues in places like New Orleans and Las Vegas, but you never see performers like this who are based in Milwaukee.

Alice Wilson: I get asked that a lot. The answer is sort of vast. For starters, I’ve been doing theater since I was eight years old, so I’ve been performing in some capacity almost my entire life. For 13 years now, I’ve been an art model at various schools around town, mostly at MIAD, as well as UWM, Alverno, anywhere there’s art classes. That’s where I got the skill to be able to stand still for a long time. in terms of just being aware of human statue or living statue, I enjoy history and I like seeking out new ways of performing or artistic expression.

I can’t really recall the exact moment when I became aware of human statues, but I’ve seen them on the internet and I’ve seen them in Chicago and Las Vegas. Three years ago, I did the Mona Lisa at Bastille Days and I shared a production trailer with Michelle Herrell, who does a statue called Statue Diva. Since I shared a trailer with her, I saw what she was doing [to prepare], and she was the one who assured me this was something you could do for a living if you work really hard at it.

MR: You mentioned you background on stage. What are some of the parallels between traditional acting and what you do now? You go from learning lines and hitting marks to your whole act being limited with movement and interaction. Are there any challenges you didn’t expect?

AW: I certainly do use a lot of my theater background in doing the statue, as well as improv. All that stuff sort of comes into play. One thing that sets me apart from many human statue performers is that a lot of them, when they come to life or move when people tip them, they just wink or smile. I try to be a little more active. With my pirate, I talk in an Irish brogue and say things like “Thanks for makin’ me booty bigger!” I try to make them fully rounded characters. What sort of character do I want that statue to be? Or what do I want them to do?

I think one of the larger challenges with that statue stuff is just being out in the elements, be it heat or rain. Sometimes rain makes it impossible for me to be out there to do my thing, so I lose money. 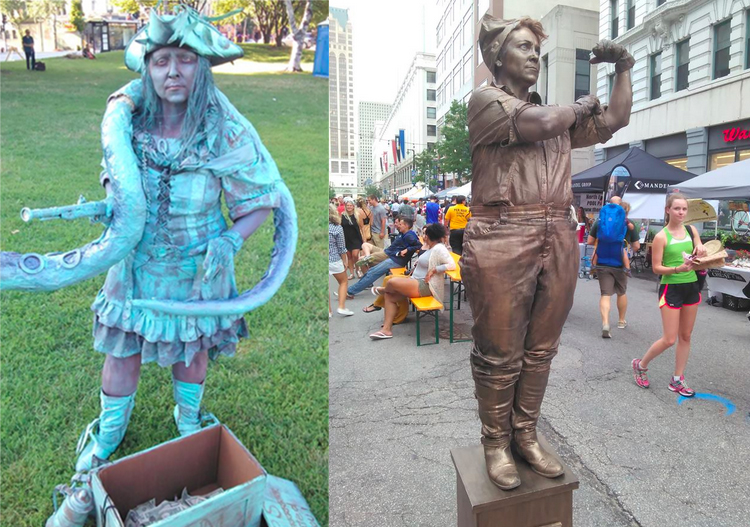 MR: Unlike traditional acting, you’re dealing directly with your audience when you’re street performing instead to playing to people who paid to see you on stage. You’re throwing yourself to the wolves by being in a midway around people who are drunk or with friends or at whatever event for a reason that doesn’t involve you. Have you ever had any situations that made you feel uneasy because that fourth wall between you and the audience was removed?

AW: Well, being out there, I know there’s always an inherent risk. People aren’t in a theater setting where there’s an expected level or decorum. They’ve also typically had more to drink than they would at a theater. In the back of my mind, I know I really am putting myself out there. Fortunately, not a lot has happened. I’ve had two negative physical incidents. A couple years ago, I was doing Brady Street Festival and a girl gave me a wet willy and that was gross. I broke character there and schooled her. The other one was at PrideFest and I had a guy run his hands up my face really hard and almost poked my eye.

MR: On the other end of things, have you experienced any positive or moving experiences?

AW: The uplifting stuff is the people who message me to say I was the the favorite part of an event or their kids really liked me. Those are the people I do it for. I do it to entertain people, and I feel like 99 percent of people are entertained and they get it. But there’s that one percent who, every now and then, will say things like “get a real job!” 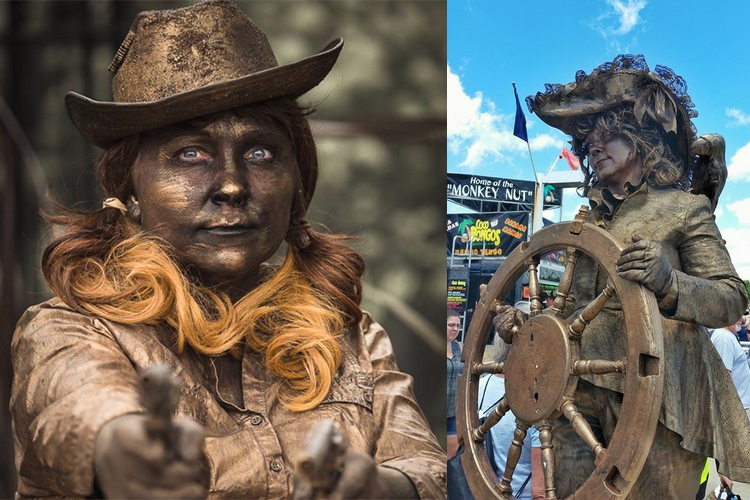 MR: Is this a viable income source? Are you making a living off this exclusively?

AW: Almost. I’m almost there. I’m not quite making a living just doing the statue stuff, but I am making a living doing all creative things, whether it’s living statue, acting, or—I’m in a new Potawatomi commercial that’s running right now—or art modeling. Nobody else in Milwaukee is doing human statue, except Michelle Hackett is actually training under me.

MR: Do you think there’s room for growth for living statue or busking?

MR: Do you have any other characters in the works?

AW: Yeah, I always have new characters in the works. I’m currently working on Benjamin Franklin. He was the first U.S. diplomat to France. I got this dress for this idea and I met with this seamstress friend of mine. She’s working on a costume for me that’s going to be interchangeable so that it can be the Queen Of Hearts or Queen Elizabeth I.

MR: You’re still fairly new to this line of work, so where do you hope to bring this?

AW: I just want to keep making a living at doing all creative things. 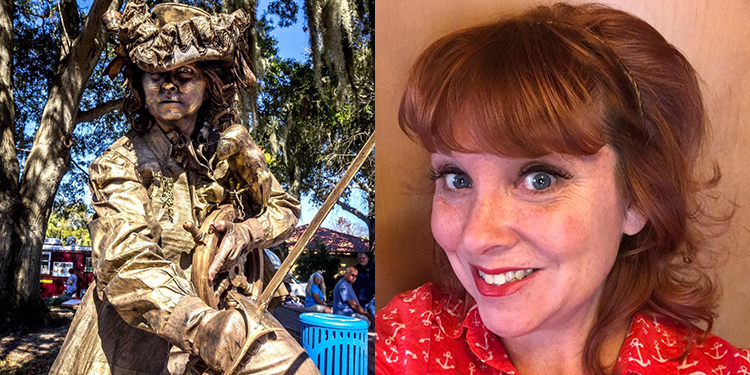