Wednesday night, as I surveyed the action of my very first NEWaukee Night Market from the balcony of the desolate Shops of Grand Avenue food court, a woman asked me what, exactly, my beef had been with the young professional “social architecture” group. Why had I criticized the organization during its early years, both in the digital pages of Milwaukee Record and in the now-deleted pages of A.V. Club Milwaukee? Why had I given them such a hard time? Why had I been so mean?

For the life of me, I couldn’t remember.

Yes, I’ve been critical of the group in the past, though probably not as much or as often as people believe. Like most things, I think most of my gripes had more to do with the inscrutable and insufferable marketing-speak that often accompanied NEWaukee events and initiatives than the actual events and initiatives themselves. “Placemaking” seemed like an empty buzzword that equated setting up a beer garden in a little-used park to putting a man on the moon. Even “social architecture” seemed like a fancy way of saying “doing stuff.” The less said about “activating space” (a.k.a. setting up another beer garden) the better.

If I dig back further in the ol’ memory banks, however, I do remember another source of irritation: the feeling that a largely unknown and untested group of marketing majors had suddenly been given the keys to the city, and that in their quest to turn Milwaukee into a new and “vibrant” city, they were ignoring—or were oblivious to—the things that already existed that made Milwaukee unique and great. They often championed mediocre artists at the expense of long-established ones. They overlooked experienced organizations for ones that spoke like they did. They supported that awful “Put Milwaukee on the map by blowing up a car!” thing.

And, though I’m loathe to admit it, there was probably a wee bit of generational angst involved. Here was an entire new group of Milwaukeeans, all roughly a decade younger than me, beginning to take control of their city. Worse, it seemed like they were skipping some steps: I had gotten to know this city through years of hard work, hard-won friendships, hard-won connections, odd jobs, and plenty of dead ends, dammit, and now these clowns were laying claim to it by going on “walking tours” and signing up for “Young Professional Weeks”? Ugh. 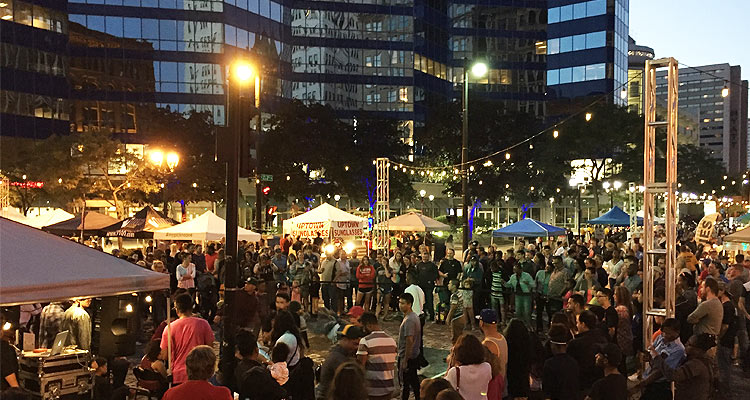 In the years since, three things have happened: 1.) I’ve chilled the fuck out, 2.) NEWaukee has gotten much better at utilizing proven Milwaukee talent, and 3.) I’ve realized NEWaukee is far from the well-heeled darling organization many people, myself included, believed it to be. Instead, it’s simply a small handful of people trying to get something, anything going in this city, and often running into plenty of dead ends of their own. It’s an organization that, until recently, had its offices in the basement of the Grand Ave., for Christ’s sake. (They’re now on the second floor.) As one half of a small business also trying to get something, anything going in this city (have you checked out our Public Domain series yet?), not to mention a business that has its offices located in an abandoned riverfront factory, I find I can suddenly relate to NEWaukee.

And so, Wednesday night, walking through the Night Market, I was stunned at the amount of stuff going on. A TRUE Skool breakdancing demo loaded with people of all ages and backgrounds. Dozens upon dozens of arts and crafts tents. A half-dozen food trucks. Walking tours courtesy of Adam Carr. Street bowling, street chess, and street art. Hell, even the Milwaukee Blacksmith dudes where there, pounding away. It wasn’t anything revolutionary—it was an arts and crafts fair, at night—but if you’ve ever hung out for 10 minutes in front of the Shops of Grand Avenue on a normal day, you’ll know that it was a welcome sight.

Oh, and there were people. Hundreds of people. Young, old, black, white, all of it. If this is how a new group of Milwaukeeans get to know their city, or how a group of long-established Milwauekeeans rediscover theirs, who am I to complain? What’s more, the fact that a small group like NEWaukee can pull something like this off not once, but four times every summer is amazing. Hell, getting 30 people to bowl a few games at Landmark on a Sunday night is hard enough for me. (We’re still looking for one more team!)

So yeah, I went to the NEWaukee Night Market (the last of the year, sadly) and it was nice. And I came away with a newfound respect for a group I once scoffed at. It’s still important to call bullshit when you see it (God, that “Blow up a car” thing was horrific), but it’s also important give a nod to those who, against all odds, are actually succeeding in getting something, anything going in this city we call home. 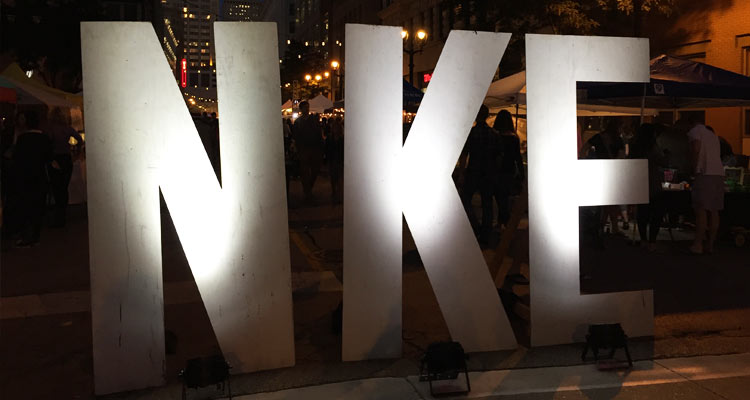