Last year, a few weeks after we posted about a particularly harsh video about West Allis (that, again, we had no part in making), I sought to see if the industrial Milwaukee suburb was indeed the “worst city in the universe” by getting an up close and personal look at ‘Stallis by taking a tour led by the city’s mayor. My night of dining, drinking, and entertainment with mayor Dan Devine was chronicled in a piece entitled “I hung out with the mayor of West Allis.” To sum it up, I left with a new perspective of a city I (like so many others) had previously reduced to a few unfounded stereotypes and unfair punchlines. Except for being hit in the kneecap by a horseshoe that took an unfortunate bounce, I had a great time in a place much of our region blindly and harshly judges.

In that spirit, I reached out to the mayor of Milwaukee’s other—and perhaps even more—stigmatized suburb to see if he’d give me a firsthand glimpse of the much-maligned city through the eyes of its biggest proponent. Last week, I hung out with the mayor of Cudahy.

Unlike West Allis, I went into this mayoral hang with a fairly solid background of Cudahy. My bank is in Cudahy. I’ve been to my fair share of punk and hardcore shows at The Metal Grill (long before they became an advertiser). I’ve eaten at Cudahy Burger Joint a few times. Some friends who have either been priced out of Bay View or who bought their first home have left Milwaukee in favor of affordable properties less than five miles away. I recently saw Bubba Sparxxx at a bar there. Oh yeah, I also went on a third shift bar crawl in Cudahy one morning. Still, I hoped there was more to the city than all-ages shows, above average burgers, cheap rent, $1 cans of Beast Ice at 6 a.m. daily, and countless unkind words from the rest of the region. If there was more to Cudahy, who better to show it to me than the mayor himself? 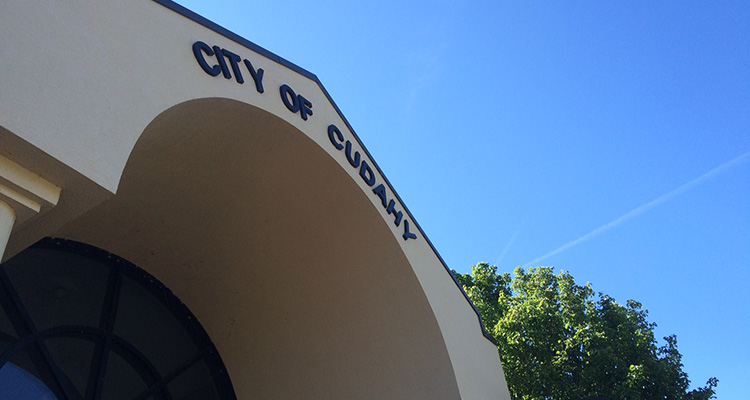 After a short, scenic jaunt down Lake Drive, I arrived at City Hall around 9:30 a.m. last Wednesday. After giving my name and asking for the mayor at the front desk, a cheery and booming voice said “Come on in, Tyler!” I looked around and soon noticed those words came from a small room situated just left of the front desk and the person talking to me was mayor John Hohenfeldt. The recently re-elected third-term leader apparently isn’t one to avoid his citizens. With that office location, it’s pretty much impossible to avoid them. I took a seat across from Hohenfeldt at a desk cluttered with documents and listened as he immediately launched into an enthused rundown of what makes Cudahy so special and why he’s called it home for all 56 years of his life.

Those 56 years span more than half the city’s existence. Its origin is a gritty underdog story of sorts, as Patrick Cudahy was essentially run out of Milwaukee in the late 1800s on account of his meatpacking plant leaving its odorous mark on Miller Valley. He moved operations two miles south of the Milwaukee border and brought a fresh wave of residents eager to earn a living in the parcel of land that would eventually bear his name and continue expanding south. In 1906, Cudahy became a city. I already knew most of this backstory, but listened on as Hohenfeldt got me up to speed with a level of excitement that corroborated the city’s “Generations Of Pride” motto. After a few minutes, we exited to the back lot and got into his souped-up early 2000s Volvo, which the mayor proudly told me was seized from a drug dealer, apparently saving taxpayers from paying more for a city-owned automobile.

We embarked on a slow-rolling driving tour down Packard Avenue (and I mean slow, as we went 15 mph at times, much to the dismay of a bus and a UPS driver) in the drug mobile. Fittingly, one of our first stops was at a corner across from ATI Ladish, a hulking metal forging company that once employed as many as 5,500 people and made parts used in space shuttles, but now employed only about one-sixth of that. Even so, it—along with the aforementioned Patrick Cudahy meat plant—remains a boon to the city, though its cold exterior and Cudahy’s continued reliance on manufacturing doesn’t exactly work against long-held regional stereotypes. Those factories spawned enough taverns for Cudahy to hold the distinction of having the most bars per city block in the country at one point. Hohenfeldt didn’t seem to mind the city being a scapegoat, telling me a quote from one of his 15 mayoral predecessors, “God and Cudahy don’t make junk.”

We turned north on Packard and I observed the first instance of what would be the operative theme of the next hour or so: old and new. After enduring a lengthy and extensive construction process in late 2014 through much of 2015 that included updating the sewer system and repaving much of the city’s main drag, the road was smooth and pristine. Crisp new American flags draped over the street from poles, and freshly-painted parking stalls were filled with cars supporting local businesses just before the lunch hour. Mayor Hohenfeldt pointed at some of the purveyors as we went by. The Metal Grill (formerly Vnuk’s, old) on our right, Cudahy Burger Joint (new) to the left, Dretzka’s department store (old) to the right, Cudahy’s Pancake House and The Gift Shoppe (both new) on the left, and so on. At the corner of Layton Avenue, I spotted the first of many signs I’d see in the subsequent minutes. 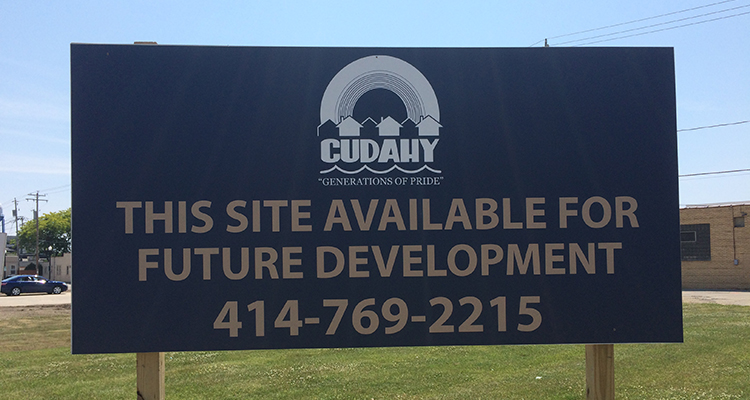 Between signage touting space ripe for development, Hohenfeldt showed me land that was already undergoing the process and places that were newly developed. On Layton stood the skeleton of the aptly-named “Layton Square,” which is a similar sight many on Milwaukee’s East Side and in Walker’s Point have come to know and loathe in recent years. However, this was something the mayor never thought he’d ever see in Cudahy and he seemed ecstatic the (eventually) four-story store front and residential structure and the newly-constructed Squire Village apartment complex were bringing new people and income to town. 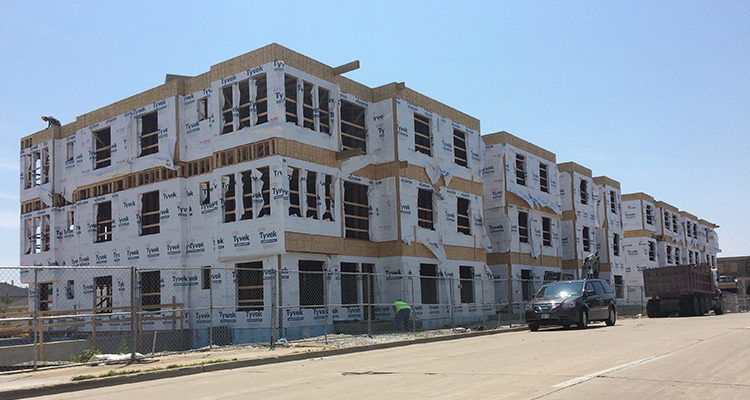 Other developments include a recent $24M expansion to the Patrick Cudahy plant and, just down the block, the Angelic Bakehouse. Citing the scent of bacon, the very factor that first brought the plant to the plot of land over a century ago and provided the first breath of life into this largely-panned and ever-changing five-square miles south of Milwaukee, Hohenfeldt summed up his feelings on the region quite succinctly while parked outside the two structures.

From there, we circled the city’s border and saw the motif continue. There were manufacturing facilities and warehouses (old) flanked by rows of homes and a car lot (new) and as we approached City Hall once again, more new homes and incoming businesses directly across from a pristine park. We returned to the mayor’s office and talked about the entirety of what we saw on our drive, about his upbringing in Cudahy, and about the differing perceptions of the city. You can stream that conversation above.

Mayor Hohenfeldt no doubt sees his home city through rose-colored factory goggles. After 56 years and being thrice-elected to lead it, it’s impossible for him to view it any other way. At one point, he unflinchingly and seemingly without a shred of irony likened downtown Cudahy to New York and Chicago. He attested a Mexican restaurant on our drive was “the best you’ll get anywhere.” Somewhere between that somewhat unrealistic optimism and the cruelest punchline you’ve heard about caricatures dwelling in an industrial wasteland is Cudahy itself. There, 18,000 (and counting) people live, work, and grow. All the while, one foot is firmly and proudly rooted in the past and another foot moves forward, on its way to an uncertain-but-promising destination ahead. 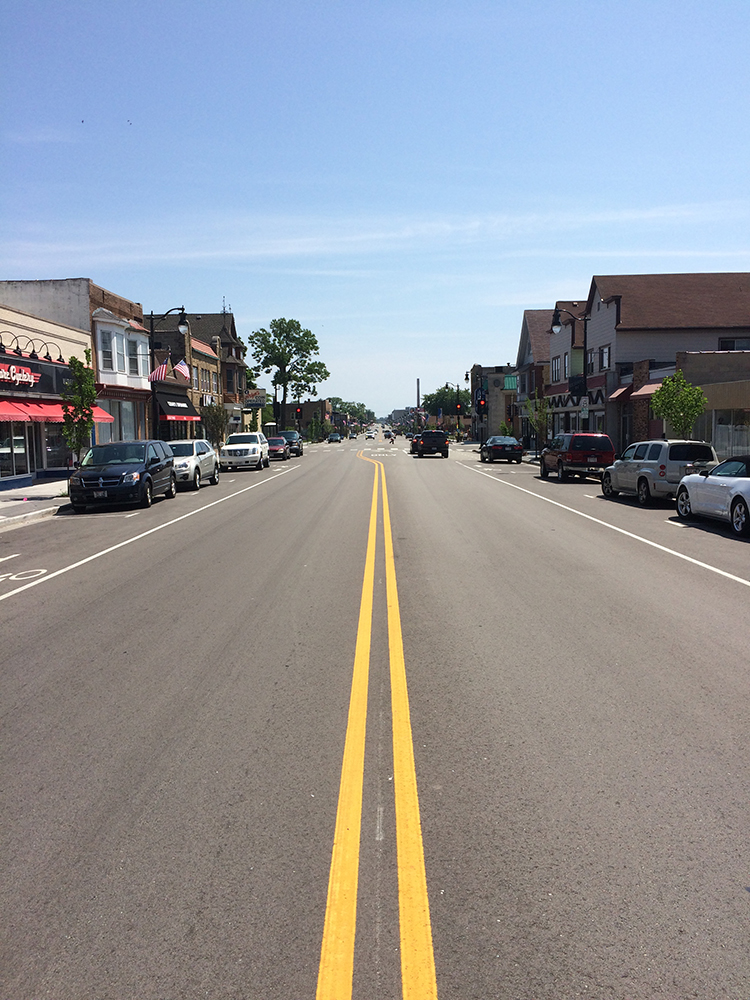