The music world is filled with plenty of outsized personalities better suited to seizure-inducing Japanese cartoons (Miley Cyrus, Katy Perry, Nicki Minaj, etc.), and artists who blur the line between artist and performance artist. (Hi, Kanye!) Milwaukee illustrator KPolly (a.k.a. Kristopher Pollard) blurs that line even further with “Fake A$$ Rappers,” a series of drawings depicting fictional rappers and hip-hop stars with names like Ms. Phantastic Stretchumout and Alpha Fo Fum. Pollard introduced the series a few years ago, and is now turning to Kickstarter to collect the drawings into a single art book.

Per usual, there are plenty of goodies being offered to potential supporters, ranging from a copy of the finished book ($20) to having your own likeness turned into one of the rappers ($850). In addition to the drawings, the book will feature a stat sheet for each fake-ass artist, which will include things like first album, seminal song, and sample lyrics. (A never-before-seen rapper will also make an appearance in the book, alongside favorites like Gold Felice and The Midwest Ugly 3Way Crew.) 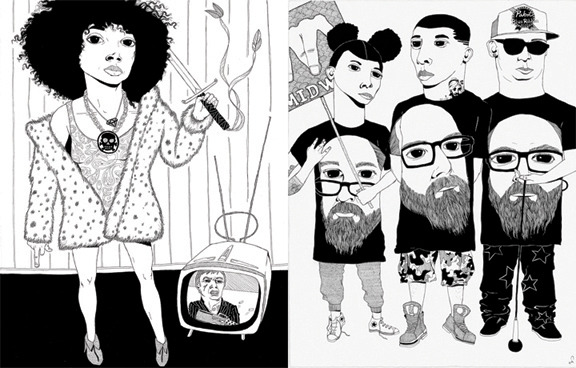 Pollard announced the project on Thursday, and he’s already well on his way to reaching his $2,300 goal. Pitch in now if you’d like to see such (completely fake) rappers like Sha-Shaun Shaun and Oui G occupying a coffee table near you.