From 1953 until 1994, the Green Bay Packers played two to four games per season at Milwaukee County Stadium. The Packers’ final game in Milwaukee—a 21-17 victory over the Atlanta Falcons on December 18, 1994—featured a last-second game-winning touchdown run from none other than Brett Favre. Nearly a quarter century later, the game remains the last time professional football was played in the city of Milwaukee.

But the Packers weren’t the only pro football team to grace the hard streets and hometown stadiums of Milwaukee. More than a decade before the Pack’s first County Stadium visit, the Milwaukee Chiefs ruled the city as one of the six teams in the American Football League. Unfortunately, the team—and the league—lasted all of two seasons.

The American Football League was created in 1940. While it was the third league to bear the AFL name, it was not the AFL that eventually merged with the National Football League in 1970. Still, the AFL in question was meant to compete with the NFL, which was already 20 years old in 1940. The AFL’s formation was contentious, and it put the minor league American Professional Football Association—of which the Chiefs were members—out to pasture. Later, the announcement that the Chiefs would be joining the league led to objections from the Packers.

But join the Chiefs did, on January 7, 1940. The AFL’s inaugural season featured five other teams: the Boston Bears, the Buffalo Indians, the Cincinnati Bengals (unrelated to the current Bengals), the Columbus Bullies, and the New York Yankees (later known as the New York Americans).

The Chiefs’ 1940 training camp was held in Weyauwega, Wisconsin—120 miles northwest of Milwaukee. (Training camp would move to West Bend for the 1941 season.) The Chiefs’ home stadium? The 32,000-seat “Dairy Bowl”—a.k.a. the oval inside the racetrack at State Fair Park. The bowl was the largest Wisconsin venue at the time, and also served as the Packers’ Milwaukee home from 1934 to 1951.

The team’s head coach was the delightfully named Ivan Wells “Tiny” Cahoon. A Baraboo native, Cahoon had been a tackle for the Packers from 1926 until 1929. A knee injury ended his days as a player. 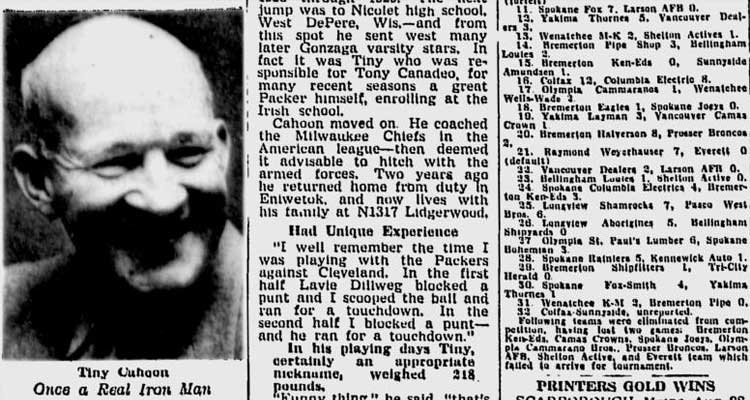 The Chiefs finished the 1940 season 7-2, second only to the Bullies, who went 8-1-1. AFL coaches chose five members of the Chiefs for the league’s two “all-league teams.”

Although the first AFL season didn’t quite put up NFL numbers, it was successful enough to return the following year. The Chiefs didn’t fare as well, however, and finished the 1941 season 4-3-1. Once again, the Bullies were league champions with a record of 5-1-2.

Plans were already in motion for a third AFL season when, one week after the final regular season game, Japan attacked Pearl Harbor. With many players from both the AFL and NFL suddenly drafted into the military, AFL president William D. Cox announced that the league would shut down for the duration of World War II. “We do not have the time to go into the football business this fall,” Cox said. “I want to stress that there is no financial problem involved. Each team definitely has enough finances to continue.”