Over the weekend, professional internet troll, hat-wearer, television pundit, podcast host, speaker, and, oh yeah, Milwaukee County Sheriff David Clarke made headlines when he tweeted it was “pitchforks and torches” time, people. “It’s incredible that our institutions of gov, WH, Congress, DOJ, and big media are corrupt & all we do is bitch,” bitched Clarke. “Pitchforks and torches time.” Much like Jem And The Holograms, Clarke’s latest tweet was truly outrageous.

It’s incredible that our institutions of gov, WH, Congress, DOJ, and big media are corrupt & all we do is bitch. Pitchforks and torches time pic.twitter.com/8G5G0daGVN

One of the many people in the lapdog accomplice liberal Big Media who took Clarke to task for his newest “my stepmom is a total bitch”-level provocation was Journal Sentinel watchdog columnist Daniel Bice. Bice recapped Clarke’s tweets, and also noted the sheriff had recently purchased a new AR-15 semiautomatic rifle, as one does. But this morning, Clarke and his Twitter followers took things to a whole new schoolyard level by whipping up—and, in Clarke’s case, RTing—a meme about the sheriff totally beating up the mild-mannered JS columnist. Come on, guys! Fight by the bike racks after school! 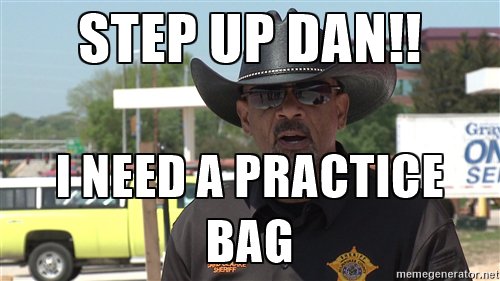 In a series of his own tweets, Bice noted this wasn’t the first time he’d been threatened or harassed by Clarke and his supporters:

. @TheOtherMandela It’s a little classier than two weeks ago when Clarke’s people were saying they were going to make me disappear.

Postal inspector says she has opened ID theft case involving me. Should I thank @SheriffClarke for posting my address on his county FB page?