Living in Milwaukee for the past six years, being a member of the arts community, and having a general interest in weird-ass shit, it’s astounding that I’ve never seen Chris Smith’s 1999 documentary American Movie. I see the film’s star and subject Mark Borchardt all over Milwaukee, but have remained unaware of how he gained such notoriety. After hearing Mark blurt out something about a peanut monster at the recent Milwaukee Paranormal Conference, I decided to embark on a journey to find out why this man is the poster boy of the city’s ’90s film scene. Here’s a minute-by-minute recap of my first viewing of American Movie.

0:00:15 Is this real? Does Mark actually talk like this? Is this scripted? 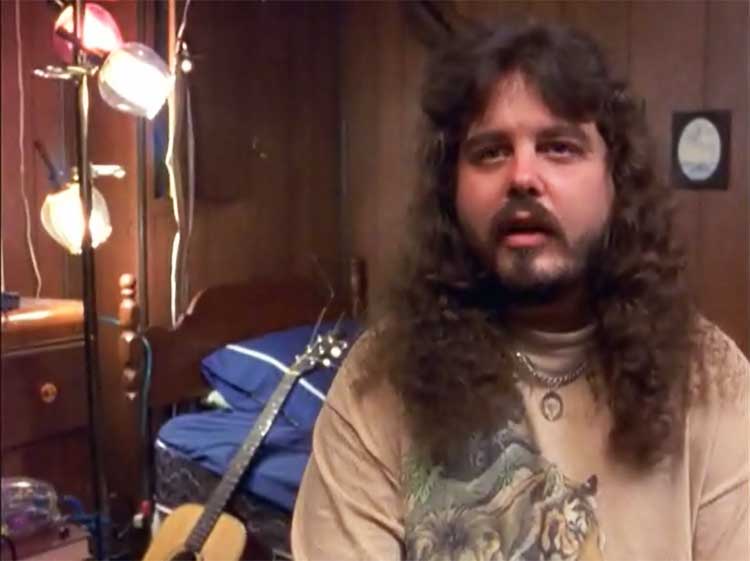 0:04:05 Mark’s bills definitely make him relatable to me at this point in my life. I too have thought about applying for one of those credit card mailers. I’m two weeks late on my car payment. I feel ya, buddy.

0:05:05 Casting in a time before the internet: flyers at suburban libraries. People talk about Craigslist being sketchy, but a sheet of paper with a few sentences in Times New Roman about a local film seems a bit risky.

0:06:47 American Movie is like Fargo meets This Is Spinal Tap and it’s a 100% accurate depiction of life in Milwaukee.

0:07:26 The shots from Mark’s earlier films are actually pretty impressive for Super 8. I am starting to think Mark might actually know what he’s talking about.

0:09:53 These actors auditioning for Northwestern are the worst I have ever seen. Maybe it’s the worst script I’ve ever heard. Regardless, when Mark comes in and just screams the lines in that poor woman’s face, I believe it. A+ acting, sir.

0:10:45 I appreciate Mark going to the Timmerman Airport to work on his script. So far, this film has been a great exhibition of bleak Milwaukee scenery.

0:11:49 Enter Bill, in a glorious Christmas sweater. His grunts and other assorted noises are primo. He is a quintessential Midwestern grandpa.

0:13:53 Mark is so determined to get out of bed to work on this film. Any cough or sniffle out of me, and I use it as an excuse to take a day off from my corporate job.

0:15:41 “My first impression of him was he looks like a pretty raw dog. He’s pretty tall and crazy lookin’. I liked it.” Thanks, Ken Keen. I don’t think that’s what “raw dog” means anymore.

0:16:45 “Coven is a 35-minute direct market thriller film shot on 16mm black and white reversal.” Yep, Mark actually knows what he’s talking about. I barely know what any of this means. He’s not just dicking around in a junkyard with a camera he found in a basement. He has a vision for what he wants Coven to be.

0:17:46 “Is that what you want to do with your life? Suck down peppermint schnapps and try to call Morocco at two in the mornin’? That’s senseless. But that’s what happens, man.” Sounds like a typical Friday night.

0:19:20 Did he just apologize to the camera for erasing his own whiteboard?

0:19:52 “Doesn’t sound very kosher to me.” Oh, Bill. I don’t trust banks and independent filmmakers either.

0:23:30 Mark rallies his Coven cast and heads out into the woods to film. The capes are making everything come together. When the cast’s jeans aren’t showing beneath their robes, you could even say they look menacing.

0:24:57 It’s refreshing to hear Mark talk about his “American dream.” Driving through what I assume are the suburbs, it makes me remember that he’s an actual person and not an actor. Is he hamming it up? Maybe, but there’s only so much you can ham.

0:26:28 Enter Joan, the new girlfriend. She’s very well spoken and devoted to the project. I like her.

0:30:17 Mike Schank is like one of those “metal goes acoustic” compilations. Vocals leave a lot to be desired, and the riffs don’t have the same effect unplugged. 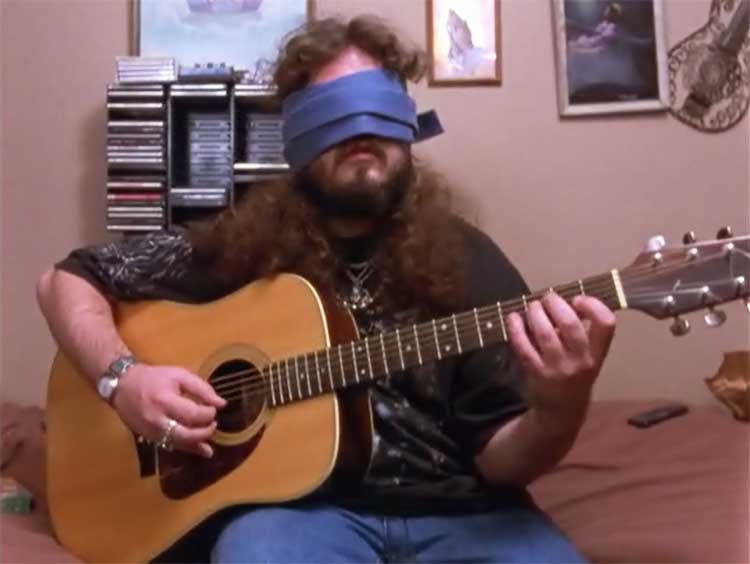 0:32:13 Poor Tom Schimmels and this kitchen cupboard scene. They put Ken Keen in charge to ensure this will work properly. Tom probably has a concussion.

0:35:21 Richard Robert Jorge and Mark are in the UWM Recital Hall discussing how to pronounce Coven. Mark thinks it sounds too close to “oven,” so it must be a long “o” sound. Solid logic, I’ll take it.

0:36:55 Mark’s own brother is suspicious of his motives for films and thinks he’s going to kill him? What the heck, man, that’s pretty rude to say on camera. No one is shit-talking your ceramic elephant, Betty Boop snow globe, and bottle of White Rain. FOH. 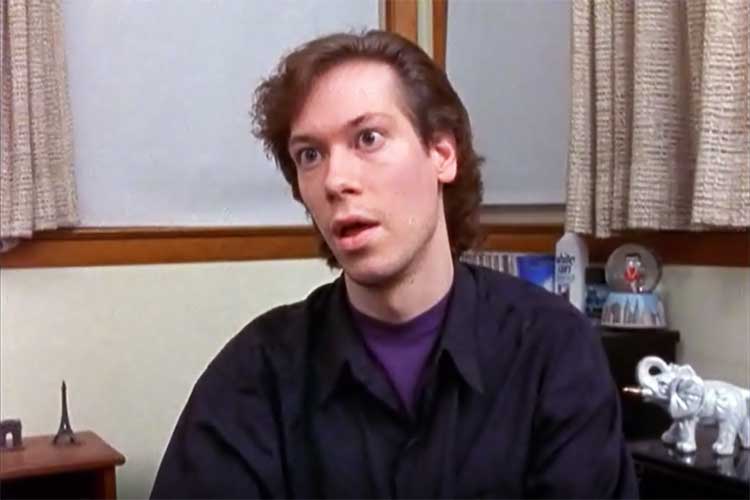 0:37:21 Mark’s son quoting Apocalypse Now, “The horror, the horror,” should be a Vine. I would use it to describe every Packer game this season.

0:42:20 Mark is really cute with his kids! I feel bad for his current relationship situation with Alyssa. He’s just trying to make things work.

0:47:06 Oh my GOD, what is this bathtub scene with Bill?! I’ve never found myself cackling about a conversation about how thick someone’s toe nail is. Not only is it absolutely hilarious and not something you could ever fake, but it’s incredibly humanizing. Mark is taking care of Bill. I’ve never done this much for my family.

0:56:56 Whoa, things are getting dark. Any feeling I previously had about Mark being a doofus has subsided. His heart is really in his film(s), and his mom doesn’t even think he’ll finish it. Alyssa comes back and fights with Mark in front of the kids, and Joan gets frustrated and leaves. I don’t know how this hasn’t gotten spoiled for me in the six-plus years of living in Milwaukee, but I really hope he at least finished Coven. 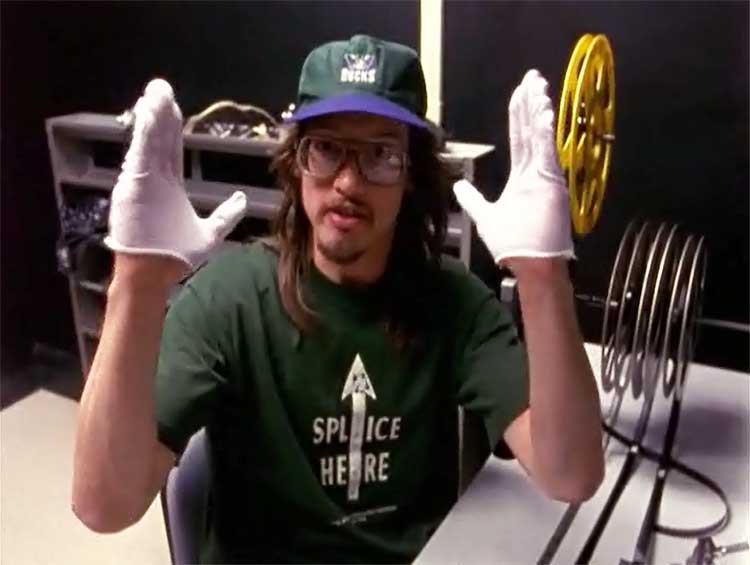 1:03:30 Mark brings flowers for Joan to apologize. They might be from his new job at the cemetery. Resourceful, I can dig it.

1:04:21 Mark’s dedication to the film is glaringly apparent. Is he sleeping in the Mitchell Hall basement on the UWM campus with his kids? I don’t know anyone who would go to the lengths he’s going to to maintain his relationships with his family and pursue his career at the same time. (The kid in me thinks this would be a super rad sleepover and I’m jealous of his daughter’s bright purple Pocahontas shirt).

1:11:30 UWM couldn’t get away with not clearing the snow from the Mitchell Hall stairs anymore. That’s a lawsuit waiting to happen.

1:12:25 NO MIKE SCHANK, DON’T YOU EVEN THINK ABOUT DOING PCP IN THE HOSPITAL WHEN YOUR MOM IS WATCHING.

1:21:22 “There was no such thing about college or religion or anything. There was drinkin’.”

1:24:24 Things seem to be coming together. Is this actually going to happen? I really want Coven to happen.

1:30:12 I legitimately feel terrible that Mark had to clean up a shit explosion in a bathroom at a cemetery.

1:40:00 Wow, Bill is looking quite skeletal and not making a lot of sense and almost falling into the street. Come on, Bill, keep it together.

1:40:46 Bomb dropped. R.I.P. Bill. Your generosity, old man noises, and love of peppermint schnapps will never be forgotten. Even 10 years after his death, I’m bummed that I will never have the opportunity to share a Surge with him.