Pro wrestling in Milwaukee is back. WWE is making its return to the Fiserv Forum this weekend, while All Elite Wrestling will make its Wisconsin debut at Panther Arena in late August. While the major companies play just-as-major arenas in town, wrestling is also coming back to the best venue for wrestling in the city: Turner Hall.

Zelo Pro Wrestling has realized the versatile venue’s greatness and has made Milwaukee’s Turner Hall into a home away from home. The Chicago-based company is making its fifth stop at the historic performance space this Sunday afternoon for an event being billed the “Ballroom Brawl.”

While most of the wrestling world was shut down, Zelo Pro was able to hold two socially distanced events at Turner Hall. The most recent, WrestleFest, saw the crowning of their first ever Zelo Pro Champion in a ladder match. That match ended up being won by GPA, The Academic Standard, who has never met a crowd he couldn’t piss off. He’ll return to Milwaukee to take his victory lap.

Counteracting that is someone who brings smiles to every crowd he performs in front of, as Danhausen comes to Milwaukeehausen. The very nice, very evil star has been a standout at Mondo Lucha and should bring a legion of fans to Turner Hall. His Conan O’Brien as possessed by a demon character is rarely seen without his jar full of teeth that he puts in his opponent’s mouth. (Perfectly legal, of course. There is no rule against having teeth in your mouth.) Danhausen is a welcomehausen addition to any show and he should get a very warm welcome at the Turner Hallhausen.

Podcasting legend and AEW star Colt Cabana will also be appearing on the show. There has never been a wrestler who personifies independent wrestling quite like Colt. He’s the guy who proved to the world that a professional wrestler could make a living in this industry without signing with a major company. Colt has since signed with a major company, but that decision doesn’t prevent him from working shows like this. The independent spirit remains strong in Colt, and he’ll continue his life’s mission to keep wrestling fun (and sell T-shirts) here.

Joining him in the “making things fun” department will be Swoggle. The Oshkosh-based wrestler had a 10-year run in WWE as Hornswoggle before getting his release. While there may have been some who expected him to fade away after that run, he’s done anything but disappear. Swoggle has kept busy over the years, appearing everywhere from Impact Wrestling and Ring of Honor, to wrestling for WWE in Saudi Arabia, to staying highly involved with his hometown promotion of ACW. 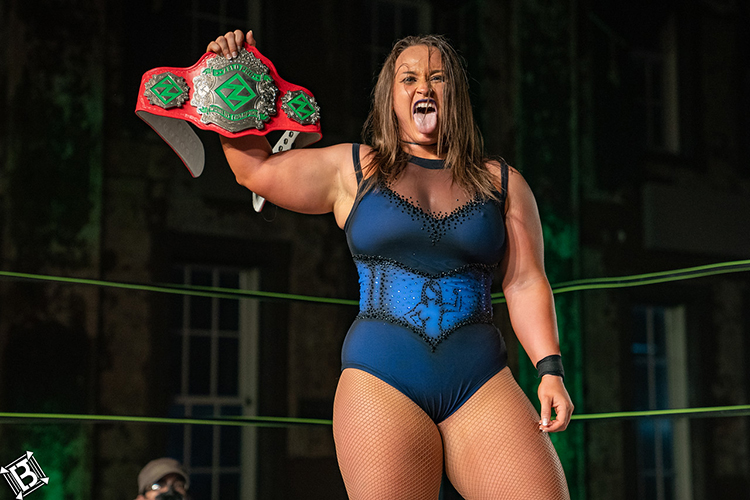 While the nationally known wrestlers and veterans of the industry are always good to see, that is just a small part of what Zelo Pro aims to accomplish. Promoter Matt Bacaling has always kept women wrestlers front and center when it comes to Zelo Pro, and this show will be no different. He believes that women are at the forefront of the present and future of professional wrestling, and the proof of that is littered up and down Zelo Pro’s Ballroom Brawl lineup. Former champion Laynie Luck, Seth Rollins’ Black And Brave Wrestling Academy-trained wrestlers Blair Onyx and Heather Reckless, the wonderful Brooke Valentine, and Milwaukee native Sierra are all names that you might not know going in, but will definitely remember when when the show is over.

Ballroom Brawl will be headlined by Chelsea Green making her return to Zelo Pro against the Women’s champion Jordynne Grace. The champion continues to impress inside the ring and out. She recently competed in a WNPF bodybuilding competition where she broke state and national records for all three of her lifts. She finished in first place and was named best overall lifter. “Thick Mama Pump” is more than just a clever nickname.

The last time that Chelsea Green was in Milwaukee for Zelo Pro, she was wrestling against the AEW Women’s champion Britt Baker. She left for a contract with WWE shortly after and seemed like a sure thing for the next independents-to-WWE success story. Instead, a few injuries and clueless mismanagement by the powers that be resulted in her not doing much of anything for the past three years. Chelsea had just 11 televised matches since signing with WWE in 2018, a criminally low number and a complete failure of the system she was in. The Zelo Pro Women’s championship has changed hands at three of the four Turner Hall shows, the “Hot Mess” should be highly motivated to make it a fourth and remind everyone of just how good she still is and can be outside of that system.

Zelo Pro at Turner Hall has given Milwaukee some memorable matches over the past couple of years, and Grace vs. Green could very well be the next one. There’s an old saying that says behind every successful man is a powerful woman, but in the world of Zelo Pro, every successful show is the result of powerful women (and a great crowd).