On Sunday afternoon, Brewers pitcher Alec Bettinger had a historically bad Major League debut. In fairness to the 25-year-old hurler, the circumstances weren’t exactly in his favor. Bettinger earned a premature promotion to a Milwaukee squad that’s currently dealing with a great deal of injuries and, once on the mound against the defending World Series champion Los Angeles Dodgers, he was expected to eat up some innings to give the overworked bullpen and thin-stretched starting rotation a break…no matter how out of hand things got.

It was rough. Over Bettinger’s four innings of work, he surrendered 11 earned runs (tied for the most ever allowed in a Major League debut), gave up two grand slams, and posted a 24.75 ERA in the game Milwaukee lost 16-4. It surely wasn’t the debut that Bettinger was hoping for, but it probably won’t be the last Brewers fans see of him in Milwaukee. There’s sure to be better days ahead for the pitcher—or at least less disastrous ones. As unsavory as Sunday’s performance was, it actually wasn’t the worst debut in the history of Milwaukee professional baseball. If you ask us, that unflattering distinction goes to Alfred “Alamazoo” Jennings, an unqualified catcher whose entire career consisted of just one game he never should have been asked to play. 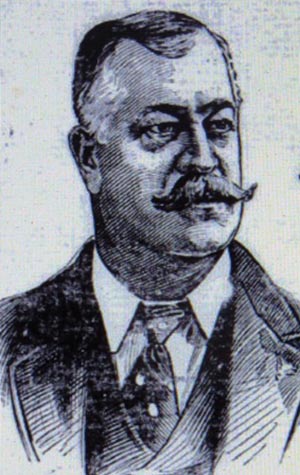 The year was 1878. The Milwaukee Grays were in Cincinnati near the tail end of the franchise’s one and only National League season to play a series against the Reds. With the team’s three catchers hurt, Grays manager Jack Chapman (pictured here in this 1900 illustration) took an unconventional approach to finding a backstop for the August 15 game. According to then-Cincinnati Enquirer sportswriter O.P Caylor, Chapman asked Jennings—a 27-year-old amateur player who was managing a baseball club in Delaware, Ohio at the time—to join the team simply because he “looked so large and handsome, so very like a catcher.” The deal was even sealed with Chapman buying Jennings dinner.

The following afternoon, Jennings was behind the plate as the starting catcher for a professional baseball team based in a city he neither lived in nor had any connection to simply because he kind of looked like he could be a passable player. He was not a passable player.

Over the course of that game, hard-throwing Grays pitcher Mike Golden and Jennings combined for a total of 10 passed balls on the official scorecard (though Jennings later claimed it was actually 17). The makeshift battery repeatedly got their signs crossed up, resulting in one of Golden’s pitches breaking two of Jennings’ fingers.

“I signed for an outcurve, and got an inshoot which broke a couple of fingers,” Jennings later said in an interview with Rem Mulford Jr. “‘Go ahead’ I said, ‘I’ll stay here all day, even if I have to stop them with my elbows! You can’t drive me away!'”

The woes of the abysmal big league debut weren’t just limited to Jennings’ defense. In his three plate appearances, he went 0-for-2, though he did reach base once on a walk. The Grays lost 13-2 en route to a 15-45 record in the team’s one and only big league season, and Jennings was never asked to play another game. He ended his one-game career with a WAR of -0.2. While his Major League service time was (almost) as brief as it can possibly get, his terrible showing made Jennings something of a legend. In an article about that fateful August 15 contest, Caylor gave the catcher who Milwaukee literally pulled off the street the nickname “Alamazoo” and criticized his putrid performance.

“When Al pulled on his sole leather gloves and poised near the grandstand at three o’clock, the crowd scarcely breathed. Zip came the ball from Golden’s hand; bang it went against the backstop because Al had stooped too late to pick it up. It took several minutes for him to gauge the speed of Golden’s pitching, but he got it down fine at last, and stopped a ball every once in awhile. But, the low comedy parts came in when the new catcher went up close behind the bat. A batter had but to get on first base and a run was scored. They went to second and third without danger, and tallied on a passed ball.”

It appears as if old Alamazoo got the last laugh. He followed his extremely brief catching career by becoming an umpire. He later became a Cincinnati Police officer before finding success as “The Parched Corn King of America,” with a profitable business and lots of friends both in an outside of the baseball realm. Sadly, Jennings died in 1894 at just 43 years of age due to complications from surgery.

His life was short and his athletic career was famously unspectacular, but the name Alamazoo Jennings lives on as a strange footnote, a trivia tidbit, and a definitive answer to the question “What would it be like if a normal person was asked to catch a Major League pitcher?” With advanced scouting, Minor League affiliations, and the ability to fly a player to the ballpark to fill in on very short notice, it’s safe to assume that what happened on a Cincinnati diamond on August 15, 1878 will never happen again. Sure, there will be dismal debuts…but there will never be another game quite like the one Alamazoo Jennings had.