Milwaukee has long been coined the “City of Festivals.” While Summerfest is easily the most popular and has been a tradition for going on 50 years, Wisconsin State Fair, PrideFest, and Bastille Days also dominate the summer circuit. More recently, Milwaukee has been introduced to festivals on a smaller scale with events like Riverwest FemFest, Arte Para Todos, Psych Fest, and Mitten Fest. While all are excellent in their own right, all of those abide by fairly traditional show structures. On the other hand, All Messed Up is a completely different animal. It’s Milwaukee’s only truly random musical experiment.

Seven years ago, original AMU organizer Tony Schwader was in Chattanooga, Tennessee as part of his tour with his band, Holy Shit!. Earlier that day, a group of local musicians got together in the morning, drew names out of a hat, and started bands based on the names drawn. That night all those brand new bands were playing a show together. Inspired by this, Schwader thought Milwaukee could replicate this event. However, he knew that there would be no way for bands to form, write songs, and play all in one day. But what if he gave participants 10 weeks? That could probably be manageable.

Wanting this experiment to be very open-ended, there were few requirements involved: each band was to play 15-20 minutes of music, including a cover song. The instruments involved, and who played them didn’t matter. If a band got stuck with four drummers, they had to make it work somehow. If some hesher could shred through every Judas Priest album on guitar, but their bandmate just started playing trumpet two weeks before the drawing, Schwader made it clear that they would have to figure out how to play together. After that, everything else was up to the bands.

In All Messed Up’s inaugural year, Schwader gathered his friends together, explained the concept, and drew names randomly. I was part of AMU that first year. Sure, I knew majority of the people in the room, but I was still nervous as hell. And as fate would have it, I was drawn into the band that had three drummers, while the other member played bass. It made decisions on who played what easy: the bassist was going to play drums, and the drummers all had to learn guitar or bass. On top of that, we had to learn to write songs on our new instruments, too. It was no easy feat for newbies, but we worked our asses off to make it happen. At the very first showcase, we were the first band to play. We played okay, though it was sloppy and filled with plenty of mistakes. More importantly, it was a lot of fun. We all persevered in a grueling task, and I knew I wanted to be involved the following year.

After the first year’s show, which was held in a Riverwest basement, the concept has remained the same. Now, All Messed Up is held annually at Linneman’s Riverwest Inn. It has gone from one night to two, and enrollment is now capped at 64 musicians, with reserves lined up for when people inevitably drop out. There have been plenty of punk bands that have formed for the two-night experience, but All Messed Up has also displayed many other genres, including space rock, hip-hop, synth-pop, and alt-country, just to name a few.

In 2015, Schwader announced that it would be his last year organizing the event alone. Last year, All Messed Up was run by a small committee that included Charlie Shields. This year, Shields took over as the head of the festival that celebrates randomness.

Over the course of All Messed Up, there have been roughly 400 participants. I’ve been fortunate enough to participate in each of the unorthodox undertaking’s seven years. I’m the only person who’s able to say that. The first times I was involved, I wasn’t in a “real” band, and just wanted to play out with friends. I also wanted to support my friend’s vision. Yet over its seven-year history, I’ve seen every All Messed Up band play, and while the strange process isn’t immune from producing some duds, a lot of cool music has been made by people who, quite often, didn’t know each other just two months earlier.

There’s something to be said for putting the amount of time required to create new music and having that live solely in a single public performance. It’s also admirable how many musicians go into this project as strangers, yet find enough common ground to create a full set of music. Every year, I still get anxious as hell before the drawing. Nobody knows what they are getting themselves into each year, and as long as that nervous anticipation holds up, this will always be the most unique weekend for Milwaukee music.

Interested yet? Come check out All Messed Up VII at Linneman’s Riverwest Inn on Friday, February 17 and Saturday, February 18. Both show starts at 8 p.m. cost $3 at the door. Some of this year’s top names include: “Macarena 2” (in quotes), That’s A Horse To Him, I’m In A Band With A Fucking Cop, and (Baumann’s band) MMOOLLDD. 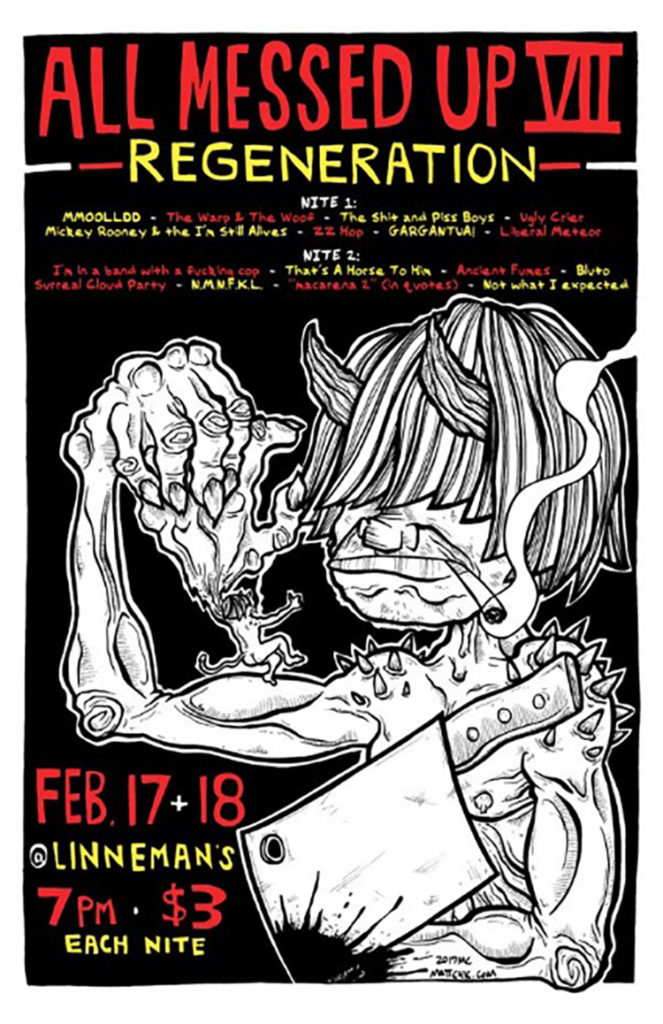