Over the weekend, a congregation of the biggest and baddest names in indie music gathered in Chicago for Pitchfork Music Festival. The three-day gig boasted an impressive lineup of artists who were fortunate enough to receive a coveted stamp of approval from the infamous music criticism website.

Luckily for Milwaukee music fans, Pitchfork doesn’t enforce “radius clauses” like that other Chicago music festival—clauses that prevent performers from playing nearby cities within a time frame too close to the festival dates. A few Pitchfork performers headlined their own shows in the Cream City this weekend, including lo-fi crooner Japanese Breakfast and indie rock gods The War On Drugs. The latter performed an ethereal, gorgeous set at Riverside Theater Sunday night that would surely make the festival crowd—or anyone—jealous they missed out.

The War On Drugs have been playing together since their 2005 inception, but their current lineup has only been in place since 2014. The band has endured its share of lineup changes (notably losing guitar player Kurt Vile to a solo endeavor), but the six-piece has the kind of chemistry that older groups seldom achieve. They didn’t miss a single beat throughout their two-hour set, keeping audiences on their toes both figuratively and literally.

The War On Drugs are one of the most unique-sounding groups of our time, and it’s obvious they draw from a variety of source material to craft their one-of-a-kind sound. Their music sounds completely modern while still drawing on classic, tried-and-true influences. Their thumping bass lines are reminiscent of New Order while their harmonica grooves bring Neil Young to mind. Nearly all of their songs could easily invoke a dance party, and the audience didn’t abuse their opportunity to move their feet.

If legendary sound engineer Phil Spector pioneered the “wall of sound” in the 1960s, front man Adam Granduciel and company have revolutionized the beloved recording technique for the modern age. Their sound was so, so incredibly full. A six-piece band is naturally going to have a sound much broader in scope than a band with fewer members, but The War On Drugs’ six members are each multi-instrumentalists who put their multiple instruments to use. Granduciel performed both irresistible guitar solos and crispy harmonica melodies while Jon Natchez traded his keyboard for a saxophone. Drummer Charlie Hall also played an organ. It’s a privilege to watch a band whose members each utilize their many talents, and it was refreshing to hear such a variety of instruments used in a rock set.

Crowd members may have purchased their tickets expecting one show, but they instead received two. Yeah, colorful lights are pretty much mandatory at any concert, but The War On Drugs had one of the most unique, gorgeous stage arrangements the Riverside Theater has ever seen. Countless white spotlights moved in unison, drowning the audience in a soft, hazy glow. On stage, a half-moon of smaller lights changed colors throughout the set, paralleling the drumbeats and bass lines. When the light hit Granduciel at a certain angle, the massive shadows of his body, guitar and microphone were projected on the walls of the theater. It was really fucking cool, and the sensory overload added an extra layer of beauty to an already beautiful show.

Granduciel was very grateful to play in front of the sold-out crowd, calling the audience “beautiful” and expressing his gratitude multiple times throughout the set. The War On Drugs probably have the least corny encore routine possible, which was very much appreciated. Instead of performing an over-the-top, exuberant miniature grand finale, Granduciel told the audience the band would grab a drink and come back and play some more. The move spoke volumes about the band and their set. The War On Drugs don’t need gimmicks to entertain; their straightforward talent and earnestness is more than enough to dazzle audiences. After Sunday night’s stunning performance, there’s no question they’ll sell out their next Milwaukee show. 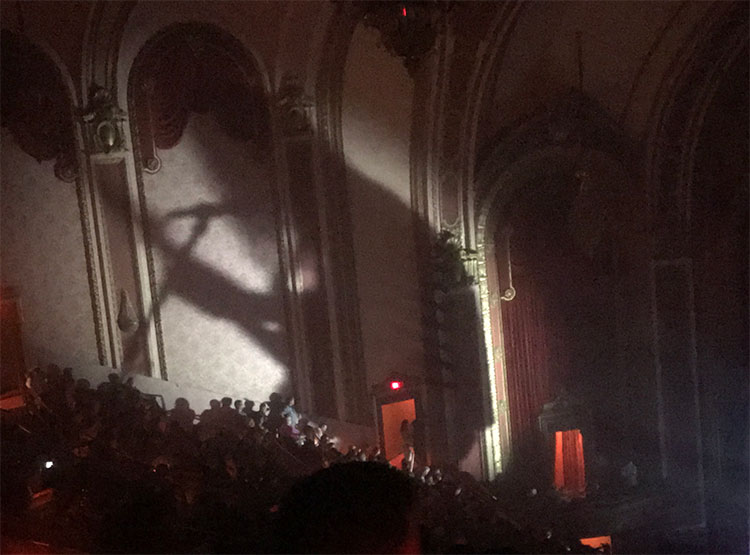