Let’s just forgo the lengthy thinkpiece about how South By Southwest (or “SXSW”) has gone from a once-significant means of independent musicians get discovered to a cheapened corporate cash-grab whose lineup includes numerous acts that are already signed. We’ll just gloss over last year’s by-most–accounts unsuccessful (though, without question, well-meaning) MilwaukeeHome stage that won’t be returning to Austin in 2015. We won’t even bother to dig deeper into why Maritime, Vic And Gab, and Hugh Bob & The Hustle opted to drop out of official SXSW shows. It’s all been said, judged, speculated upon, or written already at this point.

No matter how you feel about SXSW or what you gauge from Milwaukee’s presence at the massive music festival, people are still flocking to the Texas capital in droves each March and, as almost always, some of them are musicians from Milwaukee. This year is no different, as a small-but-impressive cluster of familiar acts are currently in (or en route to) Austin to show music fans from across the globe what we’re fortunate enough to witness on a regular basis. Not even counting now-Nashville-based Hugh Masterson or Memphis-by-way-of-Milwaukee emcee Wave Chapelle, our city will be represented at either SXSW proper or in festival-adjacent showcases by bands, rappers, a record label, and even a blues guitarist.

Should you find yourself in Austin and want to see a familiar act in a new setting, or if you want to direct a SXSW attendee to get a live glimpse of a hometown band you love, here are nine ways Milwaukee will be represented at South By Southwest in 2015.

1. George Stancell
Sixty-something blues musician George Stancell earned a slot of the official SXSW lineup after decades on less lofty stages. If you had the means and foresight to buy a SXSW-sanctioned badge, his blistering blues guitar and soulful vocals—best employed on his 1999 debut Gorgeous George—will be on display at Saxon Pub this night of Friday, March 20.

2. GGOOLLDD
GGOOLLDD’s impressive clip of shows this winter will continue as the synth-pop group’s busy itinerary has already extended down from Milwaukee and into Austin. The first show of GGOOLLDD’s seven-show, six-day Austin occupation is already in the books, but they’ll be up to something every night. 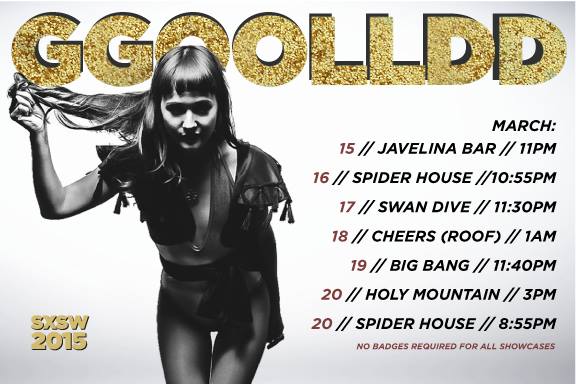 3. Good Land Records
While Good Land Records’ second annual “South By Midwest Day Party” (March 21) doesn’t have any Milwaukee acts on the bill this year, the local label will represent our city well with a stacked and free showcase with beer brats and complimentary PBR at Freedmen’s (a BBQ joint about two miles off SXSW’s campus). Though last year’s locals like Midnight Reruns, Brett Newski, and Joe Crockett won’t take the stage this time around, Archie Powell & The Exports—a Chicago band with extensive roots in metro Milwaukee—will return for a second year. Columbus’ Two Cow Garage will come back as well, and will be joined by GLR’s Josh Berwanger Band. Australia’s The Delta Riggs will make it an international affair. If you plan to see Jon Phillip’s showcase, don’t tarry. Last year’s turnout ate the restaurant out of its supply of pulled pork and ribs.

4. Group Of The Altos
It’s safe to say Group Of The Altos’ outstanding R U Person Or Not was well-received in Milwaukee. Now it’s time for the 16-piece to see how the album—which has garnered oodles of local praise, and the official release of which packed Company Brewing to capacity Saturday—fares in other markets. GOTA will be one of the few Milwaukee acts to play a true-blue official SXSW set, as well as opening The A.V. Club‘s unofficial SXSW 2015 showcase less than 12 hours later.

5. Jaill
Around this time last year, Jaill was in Austin, too. Instead of playing SXSW, they were recording the songs for the forthcoming Brain Cream, which landed the band back on the Burger Records roster. This year, Jaill will play those Austin-recorded songs (and more) Thursday at Street-Legal Guitars before playing Burger Hangover 3, a San Antonio showcase put on by its old/new label. It’s free (BYOB).

7. Temple
About eight hours prior to The Midwestern Charm set, Temple will also play Wednesday’s Texas Is Funny showcase. We’ve learned that the label will have some type of role in helping to release the Riverwest rock quartet’s forthcoming seven-inch, which (based on the portion we’ve heard) cannot come soon enough. Temple played last year’s MilwaukeeHome SXSW show.

8. Trapper Schoepp
Despite drummer Jon Phillip’s presence in Austin, the frontman/namesake of Trapper Schoepp & The Shades will perform a solo set at Friday’s “Midwest Showcase”—a free event co-organized by Madison’s Majestic Theatre—at Holy Mountain. This will also be one of GGOOLLDD’s many showcase appearances.

9. WebsterX
Third Man Records, the label of White Stripes mastermind and guacamole connoisseur Jack White, will hit four Austin locations in as many days with its “Third Man Rolling Record Store” showcase series. The eclectic genre-jumbling assemblage of acts on day one (March 19) includes WebsterX (with Q The Sun), who will perform before Screaming Females at Antone’s Records. The following day, he’ll be part of the Air Up There showcase (612 W. 6th Street).