I write about music. I listen to a music a lot. I have a (very low-level) music industry job. It’s safe to say that music is a very important of my life.

And yet, I can’t play music.

Naturally, I’ve dabbled in playing instruments before. I took guitar lessons in fourth grade and can still play “Ode To Joy” with ease. (That was the first song they taught guitar students at my Catholic elementary school.) I can’t exactly remember my reason for quitting, but I did after a year. I wish I could punch my nine-year-old self in the face.

My freshman year of college, I decided to pursue music writing professionally. I thought that it would also make sense to learn how to play an instrument and get a half-assed version of a band together. My logic was that it would make writing about music easier. I’d understand the musician’s perspective in addition to my own. I purchased a $10 electric guitar and a $10 practice amp from the “Riverwest Buy, Sell and Trade” Facebook group, and my best friend Lulu picked up a cheap drum set from Craigslist.

“Being a musician can’t be that hard,” I thought. Most of my favorite punk bands only play a maximum of, like, five chords anyway. I was sure I could do that.

Well, I couldn’t. Despite my desire to be in a band, I didn’t exactly have the time to commit to consistent practice. Being a slave to capitalism and working two or three jobs at a time doesn’t leave much free time to devote to learning a new skill. My rock star peak was when I learned the “Margaritaville” riff from a couple of “jam sessions” with my Lulu. Pretty much the only thing we had going for us were a plethora of (in our opinion) great band names: The Monica Lewinskys, Pet Jungle, and Useless Degree, among others.

But the stars aligned when we attended Milwaukee Record‘s 2017 Local Coverage show. We crossed paths with Ashley Smith, founder of Girls Rock. She told us about Ladies Rock Milwaukee and encouraged us to take a flier. We immediately knew we had to sign up.

I’ve never been able to stick with playing an instrument due to lack of free time and, frankly, laziness. I figured if I set aside a few days and was forced to play an instrument, I’d learn something.

Ladies Rock 2017 began with a party. We assembled our bands and learned what to expect from the camp. Our instruments were already assigned. My first choice was vocals, but I was given my second choice: guitar. Lulu was assigned bass. Each member of the camp went up a microphone and explained the music they liked and why they joined the camp. Lulu and I formed a band with Nyanna of Gas Station Sushi (a group of high school girls who are Girls Rock alums) on drums, her mom Becky on vocals, and Kelly on second guitar. We also met our band coaches: Addie (of Mercy Brown) and Olivia (of Gas Station Sushi). Our band was the only group with five members, and also the only band two guitarists. I was hoping we would be able to achieve that Thin Lizzy-esque sick-as-fuck dueling guitar sound. Only time would tell.

Each day at camp began with an endearingly awkward icebreaker activity—you know, like at college freshman orientation or HR retreats. After icebreakers and breakfast, we dove headfirst into instrument instruction. The lead guitar instructor was Lindsay of Fox Face, who instructed us with ease. Our primary focus on Friday morning was power chords—something I’d never learned before in my previous guitar dabbling. Lindsay taught us how to tune our guitars, use the amps, and other fundamental techniques. Our assistant instructor Caterina (also of Gas Station Sushi) taught us how to play the riff from “Smells Like Teen Spirit,” which her band often performs at their shows. The women in my group had varying degrees of guitar experience, meaning we could help each other out when needed. Other than the uncomfortable hand positions, I was surprised to learn that power chords are way easier than I expected them to be.

After instrument instruction, we attended our first workshop called “Telling Your Story.” The panel featured a number of instrument instructors and band coaches (including my instructor Lindsay, Mary Joy of Fox Face, and Joey of Rocket Paloma) as well as OnMilwaukee‘s Molly Snyder. We discussed the value of storytelling both in everyday life and in music. 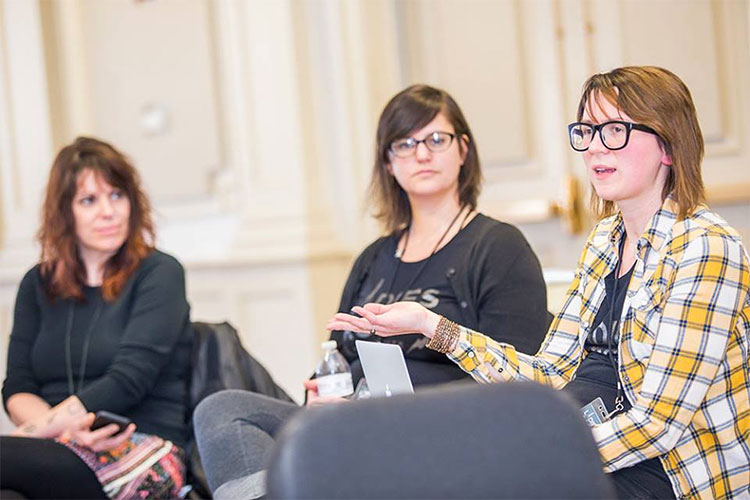 We moved onto our second workshop of the day. My band coach Addie led an informal discussion about songwriting. Instead of instructing us on how to write songs, Addie gave us helpful suggestions and techniques. Her teaching style closely aligned with the Ladies Rock ethos. No one wanted to tell us how to make music. Instead, we were given the tools to create what we wanted to create. 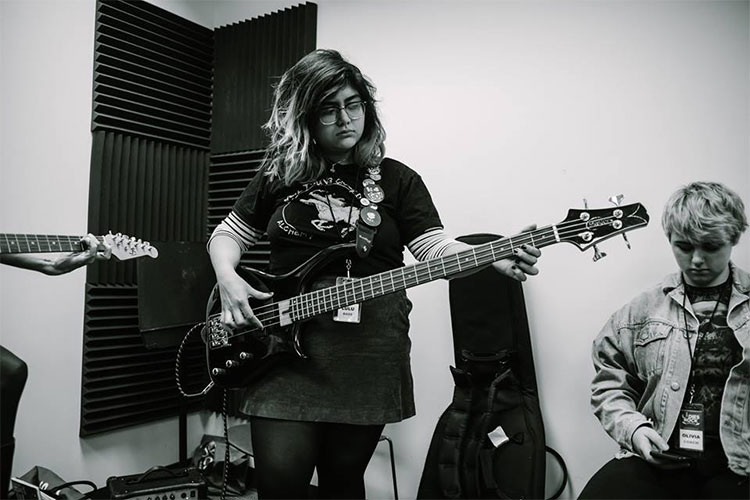 After our lunch break, we met with our bands and band coaches for our first band practice. My aforementioned jam sessions had only been with Lulu. I’d never played music with anyone else, much less four other people. I quickly learned that sharing a similar artistic vision with a lot of people is challenging, if not impossible. I started feeling nervous for the next day. In 24 hours, we were expected to have a song ready to perform. At this point, we mostly just had skeletons.

The second day of camp ended with a performance from The Blow-Up Dolls, a side project of band coach Joey. All the band members either never previously played an instrument at all, or were playing an instrument they’d never played before. It was the perfect way to end the first day. They ruled.

Saturday followed a similar format to Friday. We began with an icebreaker (which, after day one, was immensely less awkward) and announcements. We headed on our way to round two of instrument instruction.

In Friday’s “Telling Your Story” workshop, Lindsay revealed that she didn’t start playing guitar until she was 25. I found that extremely inspiring and was really looking forward to band practice that morning. Lindsay taught us how to use effects pedals—another thing I’d never tried before. We also learned shredding and strumming techniques. I was feeling way more comfortable with my guitar and was excited for band practice.

Saturday morning’s workshop was called “Image And Identity.” The workshop was led by Cris, a Brazilian punk who is actively involved in the Girls Rock camps in South America. This workshop was more introspective than the others and involved a degree of self-reflection. We made lists of our defining traits. Through a series of questions, we slowly crossed identifiers off the list. Cris then asked us to pick one trait that, no matter what happens in our lives, we will always be. We went around the room and shared our identities. Answers included “hard-working,” “a feminist,” “a mom,” and “an artist.”

After lunch, we had our second round of band practice. Our big rock show was the next day, and we needed to have something prepared. This was probably the longest and most excruciating part of camp. There was an air of frustration in my band’s 10×10 practice space. We knew we were under pressure, and throwing a group of mostly new musicians together to write a song proved challenging. We worked on song structure combining our newfound talents.

After the first half of band practice, we broke for another workshop. My band’s drummer Nyanna showed us on how to make fliers for our shows using magazine clippings. Nyanna and Lulu took the lead on creating a flier for our band, The Sprunt.

We continued practicing, and our song was almost ready to go. The day ended with a performance from Gas Station Sushi. They also rule. 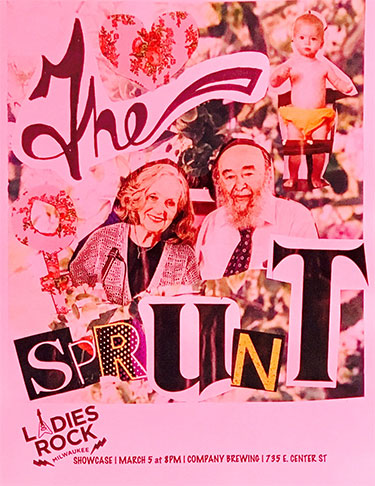 Sunday was the big day: the Ladies Rock Showcase. Before the show, each band recorded their song in the upper level of Company Brewing. I decided last minute that I wanted to sing backup. I quickly learned that singing and playing guitar simultaneously isn’t easy…especially when I had to use a lyric sheet. I didn’t even know the words.

During recording, the child-sized pick I used was purple with the Hannah Montana logo on the front. It became very slippery as my hands started to sweat. To the surprise of no one, I dropped it multiple times. After about six takes, our song was finished. We received cheers and dancing from our fellow campers. I know I made more than a few mistakes, but whatever. Rock and roll is 99% attitude.

Later that night, we met back at Company Brewing. My band was scheduled to go on first, and the hour-and-a-half wait time seemed excruciatingly longer than it was. I wasn’t nervous at first—everyone was there to support us! Everyone knew we learned this song in two days, so there shouldn’t be any judgement! As the clock ticked, I felt more and more anxious. I soon remembered another reason I never stuck to playing instruments: I hate attention from strangers.

Before the show, we received a pep talk from camp leaders D, Beth, and Ron. Ron’s words made me feel a lot better. “You know that nervous feeling inside of you?” he asked. “That’s good. That’s the rock trying to escape!”

At long last, The Sprunt took the stage. A few of my friends and coworkers came to support me, and as I started to play I began to feel extremely empowered. I was doing it—playing in a band, on stage, at a real venue, in front of a pretty sizable crowd. The closest I’d ever come to this was karaoke.

The Sprunt from Girls Rock MKE on Vimeo.

I dropped the pick in the last 30 seconds of the song, but finished my final chords playing finger-style. No one noticed. I also memorized the words to the song and didn’t need the lyric sheet.

After I got off stage, I felt a surge of adrenaline. Everyone was telling me I did a good job. Were they saying that because they felt obligated to or because I actually did? I’ll never know.

The next two bands performed, and both were equally fantastic. The Bloody Marys and sorrynotsorry both performed with the energy and spunk that you would expect. Coincidentally, every band ended up writing a song about how they hated Donald Trump, particularly his disrespect for women. Of course, it wasn’t planned—it’s just naturally what happens when you put a bunch of female rockers together.

At the end of the night, I hugged all my bandmates and band coaches goodbye. This is when I felt the tears well up in my glitter-eyeliner covered eyes.

“I wanted to prove to myself that my dreams don’t have to be in the past,” said my band member Becky. “My dream of singing in a band has been realized, and it was so much more than I expected. I went into it thinking only of how the experience would affect me, but came out of it realizing how much the experience affected everyone at camp, particularly the members of my band.”

I went into Ladies Rock expecting to learn a thing or two about playing an instrument. I didn’t think I’d be leaving the camp with tears of joy running down my face. I felt more empowered than I had in a long time. I accomplished things I never thought I would. Over the course of three days, I gained a new confidence I hadn’t felt before. I made new friends and had the privilege of spending a weekend with some of the most inspiring and badass women in Milwaukee.

I can’t wait until next year.

Both Ladies Rock and Girls Rock are both completely volunteer-run. If you’re interested in helping out, visit http://www.girlsrockmke.org/volunteer-application/ to sign up. 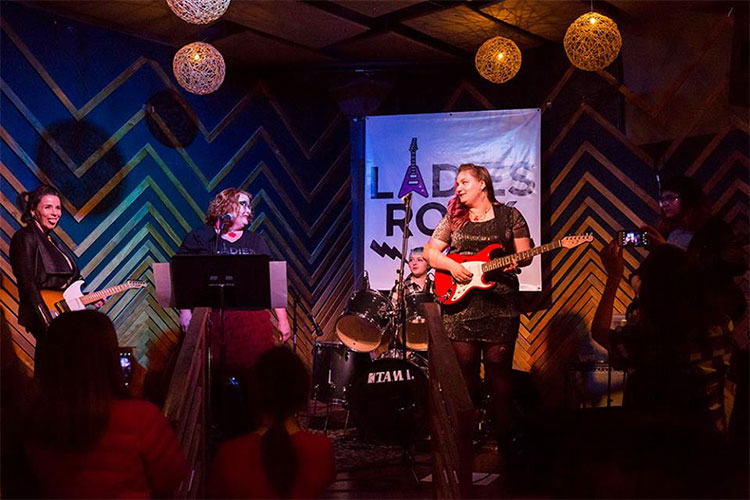