Film composition is a largely unsung art form. For every Marvin Hamlish crossing out the O on his or her ongoing EGOT campaign, thousands upon thousands of musicians work in relative silence, despite—quite ironically—bearing responsibility for the brunt of a film’s sonic identity. In 2012, Nick Elert, who plays guitar in Northless, crafted the haunting, touching score for a Wisconsin-made dystopian feature-length drama entitled Dead Weight. Following his foray into film composition, Elert was enlisted by the same directorial team to lend musical accompaniment to an intense and utterly uncomfortable 2014 short called Pity, which has garnered both admission to and awards from a host of film festivals. In accordance with Pity‘s public release—which we’ve embedded below—and special edition release on DVD and Blu-Ray, we spoke to Elert about his introduction into film composition, how his approach changed between projects, and what Northless has been up to lately.

Milwaukee Record: You were also involved in the movie Dead Weight. How did you and John [Pata], who directed both, first get involved?

MR: Is [scoring] something that you’d ever done before at that point?

NE: I’ve never done that before, no. At first he was like, “You just play guitar in a metal band. Why should I give you this job?” Then I sent him some other things I’ve done by myself and I think I sent him some Canyons Of Static stuff. It was originally going to be a bunch of different people contributing, but then everybody fell apart and it was just me left, so I wound up doing the whole thing.

MR: Yeah, it has an overall haunting, winter vibe. What was it like to be learning how to write music for a feature film while, at the same time, working with first time directors? Was there a lot of trial and error?

NE: There was a lot of technical stuff about syncing for video that I had no idea about, but once I figured it out, were really simple. Some thing could have gone a lot faster. Dead Weight took me way longer than it should have because there was such a learning curve for it.

MR: But you apparently liked it enough and they liked your work enough that you were brought back for the next project [Pata and Bartlett] were involved with, Pity. I guess there are a lot of differences between a feature length film and a seven-minute short, so in what ways did your approach differ?

NE: The instrumentation was totally different. And there’s constantly music going through Pity, whereas there’s only about 30 minutes of music in Dead Weight—which is about an hour and 15 [minutes].

MR: I’m sure Pity was difficult because with a feature, you have more room to move around and more entry points to do different things in different ways and play around. With a seven-minute effort, every moment, every note matters more.

NE: Yeah, there’s was a lot more back a forth between me and John on stuff with Pity. “This doesn’t work” and “This is working okay”, “This isn’t working enough.” 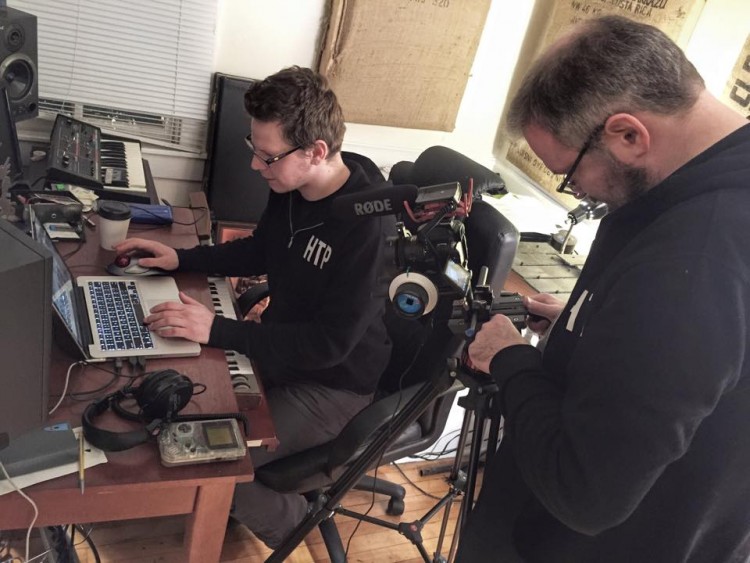 MR: What’s it like to have your music married with visuals?

NE: I’m not thinking of the music on its own. The narrative comes first and I come on after it’s been filmed, edited, and narrated. So the visuals are informing the decisions I make. The form is already there and I just have to not get in its way. That’s what’s totally different between writing music for film and writing music for music’s sake.

MR: You’re adding the icing on the cake. The idea of adding musical accompaniment, if it’s done right, you don’t even realize it, you know? It just sort of envelops the viewer into the project.

NE: That’s kind of what I was going for most of the time. A lot of people, when they were done with Dead Weight, they were like, “There’s music in that? Oh yeah, there was music!” That’s the kind of stuff I like in movies.

MR: Into the actual musical specifics of Pity, what were some of the things you brought into it?

NE: The sound design of it was kind of a huge deal. I had just bought this synthesizer that’s made for sampling, so because Pity deal with just one character and voiceover narration, I told John I wanted to take all of the voiceover narration and use it as my surface material for making the sound design. At first he didn’t know about the idea, but I was like “Just let me try and do something.” That was the biggest back and forth. There were moments when it was starting to get into robotic dubstep territory and he was like, “Okay, we gotta get away from this!”

MR: So you talked about these projects you did with Adam from Gilead [Media], who puts out your music. What have you been doing with Northless lately?

NE: At the beginning of January, we went into the studio to record songs for a series of splits that we’re going to put out over the course of the year. The first one is with the Primitive Man, which will be out on Halo Of Flies in, hopefully, August because we’re going to the West Coast for a few weeks with Primitive Man.

MR: And I heard about one on Triple Eye Industries, too.

NE: Yeah, during all this, Marty [Defatte] came to me and said, “Hey, would you do something with us, too?” So we’re taking one song that’s like 14 minutes and that will go on one side of a 12-inch.

MR: Total hack, shitty question, but what are a few of the parallels and some of the major differences between playing in a band with and in front of other people and laboring alone in the studio?

NE: The biggest thing is the approach to working, really. When you’re with a band, it’s a team effort. I have brothers I can rally around if I’m feeling anxious or anti-social, whereas with the movie work, you don’t have that kind of security blanket of other people. It’s all kind of on me. The band stuff is a little more immediate in the sense of excitement. The movie stuff is more of a slow-burning thing. Once it actually goes up on the screen, even though your name shows up on the credits, it’s a little more anonymous, which doesn’t bother me at all. The work aspect is what’s exciting about it for me.

Pity is available via Head Trauma Productions. Dead Weight is available on Amazon and Hulu Plus. Northless plays at Cocoon Room on June 7, at Club Garibaldi on June 17 and at The Metal Grill on June 18.