Comedy fans know Mike Burns as a hilarious stand-up comedian, author, and host of the Power Moves With Mike Burns podcast. The rest of the world knows Burns as the creator of @DadBoner, the popular Twitter account that chronicles the life and times of a fictional Michigan man named Karl Welzein. Much like his online alter ego, Burns also has a strong connection to Michigan. Though he now calls Los Angeles home, the Saginaw native still clings to his Midwestern roots, including his love of the Detroit Lions.

Before the Packers play Detroit this weekend, we asked Burns about his past as a Lions fan, how he feels about Green Bay, where he was during the “Rodgers to Rodgers” Hail Mary, and why he keeps watching the Lions after so many tough seasons.

Milwaukee Record: How long have you been a Lions fan?

Mike Burns: When I was a little kid, I was a 49ers fan. In most of my mid-80’s birthday photos, you’ll see me in a Joe Montana jersey. I thought Joe Montana was a cool sounding name and, thus, he was a cool guy. I guess I didn’t become a Lions fan until later in life when I moved away from Michigan and wanted a connection to home. Also, it became possible to actually watch Lions games.

MR: What are some of your favorite Lions memories?

MB: Most of my Lions memories are of me sitting in my grandparents’ living room with my dad, uncle, and grandpa—clad in his Lions golf shirt—Little Caesars “Pizza! Pizza!” smells in the air, excited to watch the game. Then, inevitably, the Lions would be blacked out on television because the game didn’t sell out because the Lions sucked and no one wanted to go to the Silverdome. But the 49ers would be nationally televised because they were awesome, so I became a Joe Montana fan.

Other than that, my favorite recent Lions memories are of watching Lions-Packers with my Wisconsin buddies at The Holloway bar in Los Angeles, screaming at the TV.

MR: Who is your favorite non-Barry Sanders Lion of all time?

MB: Billy Sims. I had a Billy Sims beach blanket when I was a kid. Like Joe Montana, Billy Sims is also a very cool sounding name, which goes a long way with an eight-year-old. What’s even cooler, his full name is “Billy Ray Sims.” 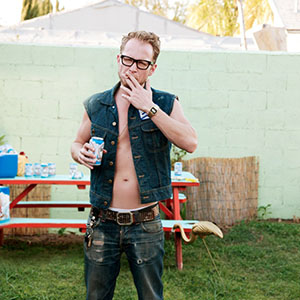 MR: The Packers-Lions match-up has been fairly one-sided, especially lately. How do you feel about the Packers and Green Bay as a whole?

MB: I absolutely love my Wisconsin people and it’s nice to live vicariously through them when the Lions suck and don’t make the playoffs. I don’t hate Green Bay at all. Watching Rodgers throughout his career has been a privilege. Good football is good football.

MR: Have you ever been to Lambeau Field?

MB: I have not, but It’s on my bucket list. Literally just talked to my girlfriend about it yesterday.

MR: Where were you during the Aaron Rodgers Hail Mary? What was your reaction? Should I even be asking you about this?

MB: I was in the previously-mentioned bar with said Badger buddies. I dropped to my knees. I was screamed at by them and ridiculed. Hard. Thing is, it doesn’t sting that bad anymore. Lions fans have built up emotional calluses. We have a saying, “Lions gonna Lions.”

MR: Who’s your least favorite Packer of all time? Why?

MB: Randall Cobb. Drafted him late my dynasty league this year. Balled out the first game on my bench then took a shit when I started him. Dropped. So I no longer like Randall Cobb.

MR: What’s the life of a Lions fan like? There have been some great seasons in the ’90s, but it’s probably been pretty tough sometimes. What keeps you watching and caring?

MB: I’m a RedZone junkie. Fantasy football keeps me going because that’s the priority. But you have to be able to laugh at the Lions. I watched the Jets Monday Night Football game this year at happy hour with four Michigan pals. We chuckled our dicks off at the absurdity of how smoked the Lions got. You gotta lean into it.

MR: The season is still pretty young. What’s your prediction for Sunday and for the rest of Detroit’s season in general?

MB: I’m hoping for a shootout on Sunday. Packers are pretty banged up though, so who knows. As for Detroit’s season, you’d be a fool to not just assume it will be garbage. That’s the discipline. Anything better than garbage is a great surprise. Doesn’t mean I don’t have love, but sometimes you have to accept that your team is a fuckup. We’ll see if Matt Patricia decides to increase Kerryon Johnson’s workload and stop wasting time giving the rock to [LeGarrette] Blount.

MR: Anything else you’d like to say about the Lions, football in Michigan, the Packers, or anything at all?

MB: God bless football, the Midwest, beer, and brats on a crisp autumn day with your favorite sweatshirt on. I’m an October baby, and for me, it doesn’t get any better than that. And if you have time, subscribe to Power Moves With Mike Burns on the podcast listening service of your choice. I think you’ll dig it.