Even if you’ve only seen a few local bands in recent years, there’s a decent chance Nick Lang was in at least one of them. The percussionist currently keeps the beat for seven Milwaukee projects, and that astounding sum doesn’t even cover his occasional stints in Milwaukee Symphony Orchestra pops concerts or filling in on drums with bands like Caley Conway and Lady Cannon. Oh, and he also teaches private drumming lessons.

Lang isn’t just one of the city’s busiest drummers. He’s also one of the best. Lang’s versatility and attention to detail has found him playing in folk, country, jazz, and blues outfits, and even sitting in for the occasional cover band from time to time.

Much of the authenticity Lang applies to his numerous projects comes through his extensive musical background. He’s spent 20 years behind a drum kit. He majored in classical percussion at UW-Milwaukee, then went onto an intensive master’s drumming program at Indiana University. When he graduated from Indiana in 2012, he returned to Milwaukee and joined Tweed Funk. That band proved to be a catalyst for his drive as an artist and performer, as Tweed Funk averaged about 70 shows annually (including some “four-hour marathon shows”) during his three years with the band. Still, Lang found time to join The New Seven—which is now defunct—in the process.

While he’s no longer part of those two bands, Lang is currently involved in an eclectic and impressive cast of projects that includes Buffalo Gospel, Derek Pritzl And The Gamble, Long Mama, Blind Fiction, The Hatchet, Matchstick, and Andrew Trim Trio. That workload—that finds the driven drummer playing as many as 156 gigs in one year, including as many as three in a single day—is necessary to allow Lang to carve out a living wage as a musician.

“You’ve got to be a renaissance man because the music scene sometimes feels like it’s struggling and gigs today pay what they did 40 years ago, so you have to hustle for as many gigs as possible in as many avenues of work as possible,” Lang says. “If I’m saying no to a lot of gigs in the fall and the spring, then they might not be there in summer. It doesn’t feel like work sometimes, but it definitely carries real amounts of stress.”

Though it can be daunting to juggle eight different projects, lessons, and fill-in gigs all at once, Lang says he has methods to help him stay on top of everything. Though he makes exceptions for tours or particularly special shows, he tries to approach every request on a “first come, first serve” basis.

“If the date is free in my calendar, I almost feel bad saying no to it,” Lang says.

He also makes detailed charts for each project’s material to help him quickly learn and memorize things like how long each section of music is, where there are stops, where there are starts, and where beats and cymbals switch. Despite being spread incredibly thin, his various bandmates are quick to mention the level of preparation and professionalism he brings to the table.

“I could go on for days about his playing, but the quality I love most is his obsession with serving the music, not himself,” Buffalo Gospel singer Ryan Necci says. “He will happily choose simplicity over a flashy part if it’s what is ultimately best for the song. That’s a rare quality as well, and one that only comes with years and years of experience.”

Whether he’s complementing a folk or country song in a crowded ballroom, leading the experimental jazz charge with Matchstick in a cozy club, or playing a crowd-pleasing cover song at a church picnic, Lang is ready, willing, and able to both keep time and make time for almost anything that’s thrown at him.

“Nick brings a wide range of styles through his experience and schooling,” Blind Fiction singer-guitarist Timothy Wright says. “I’ve played with him in jazz combos, cover groups, funk groups, and blues groups. I think his ability to help compose the song with his set ups and constant ear for the form make him one of the most talented drummers I’ve ever played with.”

Lang acknowledges he’s not the only Milwaukee musician with lots of irons in the fire. He mentions musicians like his Buffalo Gospel and Derek Pritzl bandmate Andrew Koenig, as well as the likes of Devin Drobka, Barry Paul Clark, Mitch Shiner, and Ian Ewing are just as busy as he is.

Modesty aside, Lang says he feels fortunate to be in a position where so many people want to play with him, and one in which he’s offered so many opportunities to perform for people in bars, coffee shops, breweries, theaters, and even the rare hot balloon festival for a living. He might always be working, but he loves what he does.

“I certainly get stressed out and I savor a night off, especially a Friday night so I can stay in, but I wouldn’t say I ever really get drummed out,” Lang says. “I get to play so much different music that I love with so many great people, and I get to work with such a wide variety of students that it never gets stale. That, and I’m just pretty grateful at the very idea that I even get to do this.”

Nick Lang will perform with Derek Pritzl And The Gamble at Cactus Club on May 29, with Blind Fiction at Pabst Brewery & Taproom on May 30, with Long Mama at Boone & Crockett on June 3, and throughout the city with a variety of bands this summer. 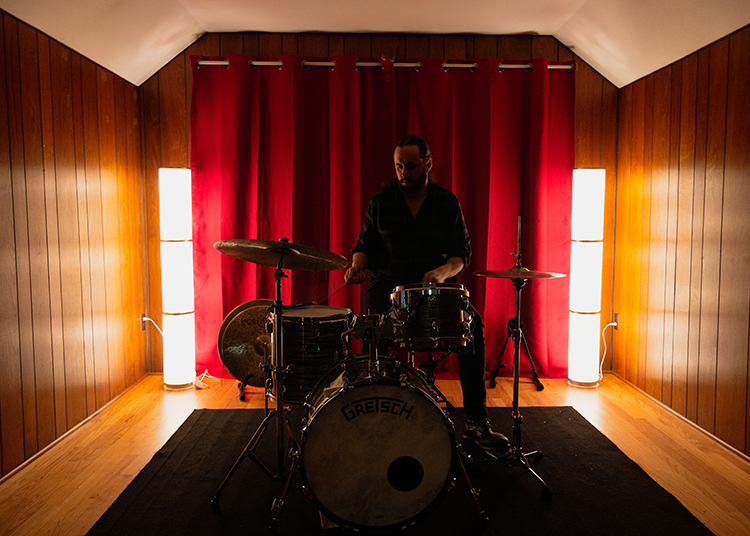